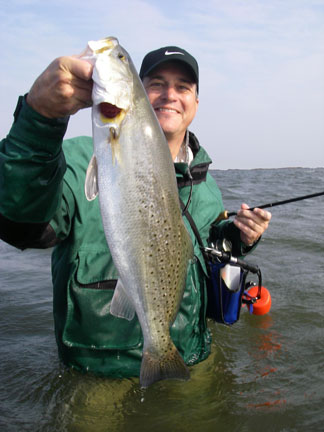 The fabled month of February is upon us. Like so many other fishermen, I look forward to this time of year. Great numbers of large trout can come from this 28 day time period; however, I think it is perhaps as attributable to the vast number of fishermen and days spent on the water as it is a good time to fish. True, the trout are big, but so are the traffic and pressure.

When it comes to charters, I wish every month was named February as I can never squeeze in enough days this time of year. So much has been talked about, written about, and fantasized about February in Baffin. You would think you could not catch a large trout any other time in the Baffin/Upper Laguna complex. Luckily, for me, I know this is not true.

The great thing about February is that the big trout will, typically, pull up shallow into "wadeable" water. When they do this, it is usually in vast numbers, and in many different locations. Of course there are always a few hot spots where every boat in the bay seems to load up, but reports will be coming from the King Ranch shoreline, spoil islands along the ICW, south shore of Baffin, as well as the north shoreline. With a sharp eye monitoring your surroundings and what is taking place in the water, a trophy is as likely to come from within a quarter mile of the boat ramp at Bluff's Landing as it will from 30 miles into Baffin.

With February here, numerous tournaments scheduled, and big trout pulling up on the shorelines, we can all expect to see more traffic. A year ago it was about as crazy as I have ever seen it. There were boats everywhere; running shorelines, pulling in front or too close to established wade fishermen, and being generally inconsiderate. Many of the boaters are novices, and just do not understand on-the-water etiquette, but there were also seasoned guides, locals, and tournament fishermen just as guilty.

If there is but one thing I can stress to all fishermen it would be this: The large trout will stay longer and be more accessible to wade fishermen if boats will stay off the shorelines. This would include spoil islands, King Ranch, and Padre Island.

There seems to be a longstanding myth that you have to run right on the Laguna shore when headed to Baffin. Nothing could be further from the truth; in fact, you need to be 300-400 yards off the shoreline at all times to be in the safest water. It is not only safer, but will prolong quality fishing on shorelines for months versus weeks. About the only time you need to squeeze in any tighter is at the old pipe line near ICW #167. After that, split the difference between the shore and spoils and you are good to go until you approach ICW #199. If you want to see real success in fishing shorelines, try shutting down 200 yards from where you plan to fishing and use your troll motor to go in. Most would be amazed at what a little stealth will buy them.

For the next two months my pattern will not waver too much. I will spend the majority of my time behind my Waterloo/Daiwa Sol and 5" Bass Assassins in potholes, regardless of whether I'm in Baffin or the Laguna. Once we locate the right sized fish, we will try an assortment of Corkys. Typically, we will pull the largest trout on Mr. Brown's wonder lure (Corky), but quite often they want it hanging in the grass and scraped along the bottom, and, for this, the Bass Assassin will prevail.

I recently had the opportunity to fish with my good friend, Capt. Jay Watkins, in my home water. Jay stayed with the "worm" all day while I experimented with an assortment of suspending lures, topwaters, and stick crankbaits. He "out caught" me by nearly 4:1 sticking to the basics of "low and slow" with the Bass Assassin. I probably would have caught more fish if I would have been paying more attention to my lure versus watching and learning tricks from him, but, with all that said, he just went on to prove that when you stick to the basics and fundamentals the rest will always fall into place. I knew it going into the day, but also knew it was a perfect opportunity to play with new toys while catching a peep show from the master. Lesson learned!