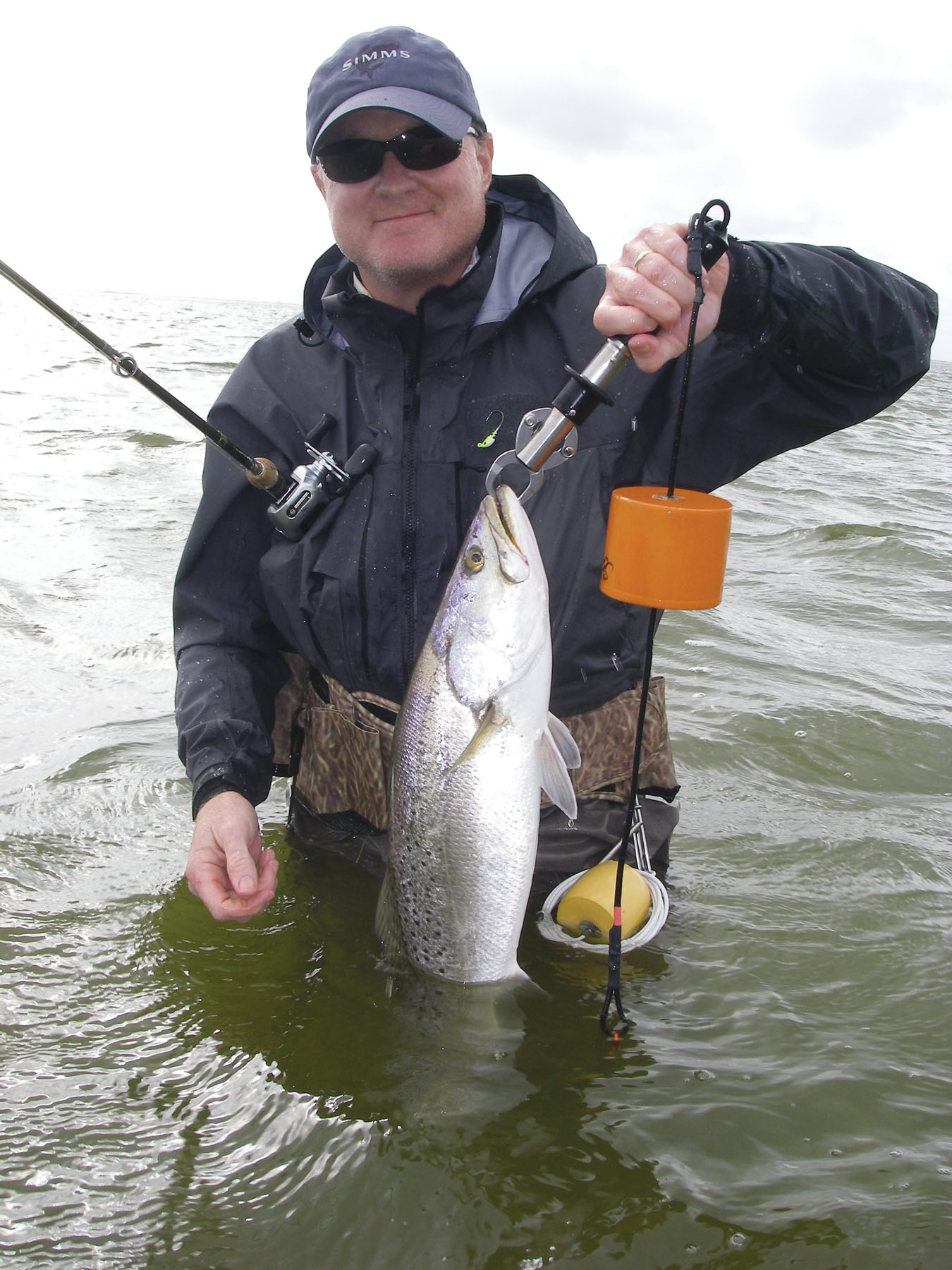 If you are a deer hunter, you are familiar with the rut and how normally wary bucks lose their minds for the chance to procreate. Trophy trout fishermen are much like big bucks during the rut when February rolls around. They disregard the buddies they have been hanging out with over the past ten months; they forget about eating and willingly face the brunt of the elements, all for the chance of that trophy connection. Chattering teeth, cracked lips, bright red noses, and speech starched with expletives as they explain the sometimes strong winds are standard fashion for February grinders on Baffin Bay.

My charter books this winter look like a ride on a roller coaster through December and January. I have cancelled numerous days due to bad north wind and water temperature dropping into the 40s. Yes, I will fully admit that fishing has been on the tough side so far this winter, but here comes February to the rescue. Of all the months that we cut through the water in our Simms waders, February has established itself as the month to be on the water for landing a giant trout. For me, it was always late March to mid May, but Jim Wallace's new state record in February of 1996 made this short month jump to the top of everyone's list as the time to get it done down here.

February will establish some different patterns that were not always available in December and January. Southeast winds warming chilled winter waters will be the beginning of it all. As the water temperature rises, the larger trout will be more inclined to get on the shorelines and away from the deeper waters that has made it necessary to fish out of the boat at times. As a guide that spends 99% of his time wade fishing, this pattern is much welcomed.

February will also bring the opportunity to test our abilities in many other areas than those that hold us captive on north wind conditions. Shallow flats, spoil islands, Baffin's south shoreline, King Ranch and Padre Island shorelines will all now come into play. Having more real estate to work in is a blessing for us as the bay becomes more pressured by the kickoff of tournament season, the arrival of many non-local guides, and everyone else that owns a boat and just loves to fish. As long as we are all courteous, there is plenty of room for all. Running boats 200-300 yards off the shorelines and upwind of drifting or anchored boats is a good place to start.

February and on into March will be a pretty similar pattern. I will spend the vast majority of my time with 5" Bass Assassins in potholes, regardless of whether I'm in Baffin or the Laguna. Once we locate active fish, we will try them on an assortment of Corkys. Typically, we will pull the largest trout out on the Corky but, so often, they want it down low in the grass, and bounced along the bottom and, for this, the Bass Assassin on a 1/16 oz. jig head reins supreme. The topwater bite will also play a major factor in locating fish in February. There is no lure more fun to fish, but it is not always the best choice for a giant trout during this month. My personal preference is for southerly wind directions or calm conditions on the backside of a warming trend. Trust your instincts and surroundings to determine your best lure choice, and be willing to give all of the aforementioned lures a chance at glory during this time of year. Bait activity will be the major player in determining whether your lure choice should be subsurface or on top of the water.

In closing, I would like to say thanks to all of you who are practicing catch and release. The trend is catching on, especially for the younger crowd getting into the game. Giving the trout over 20" the chance to swim again and reproduce is not only a good feeling but it needs to be done for the health of the fishery. My number one goal when I first started guiding was to have a platform to encourage people to fish for sport and love of the game versus the thrill of the kill. Helping and teaching aspiring lure enthusiasts how to be successful with all types of hardware is very rewarding, but nothing tops when they put it all together, land a trophy-class fish and say, "Easily my personal best. Let's get a quick picture, and let her go." If you have done it with me, any other guide, or on your own, you have my admiration and most sincere thanks.

Fishing is a discipline in the equality of men. For all men are equal before fish. - Herbert Hoover