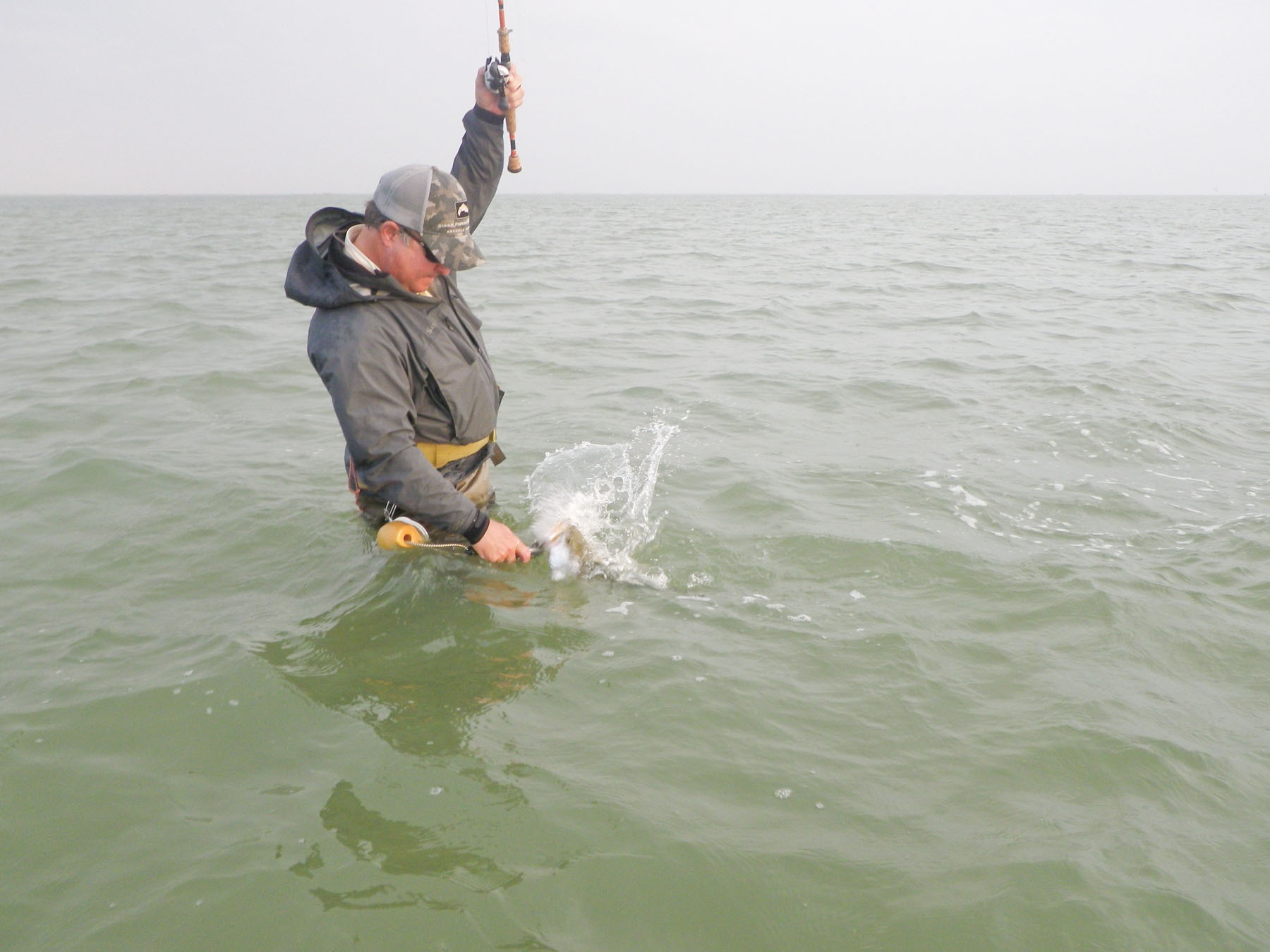 Matt Rotan is a model for being prepared on the water, as he goes to land this trout.

Every phone call and email I get regarding charters always has the general statement attached, "What is the best month to catch a big trout?" I honestly reply, "Hard to say, each year is different, but February is tough to beat." The truth is that anytime from December through May can produce legitimate giants that sport not only length, but girth too. February, being in the approximate middle of that time frame, traditionally wins out for some of the most consistent big catches we see each year. With hunting season in the rearview, the trophy hunters come out of the woods, so to speak, and their determined focus is on the wiliest of all Texas trophies - giant speckled trout.

As I sit here and bang out this article, it is 42 outside with wind chill of 33. As anxious as we are to get on the water and get it done, I feel obligated to try and reinforce the importance of being prepared on the water this time of year. Twice this month I have had clients on the boat that appeared to be prepared, but were not. Both of them had old leaky waders, and in one case, only shorts underneath with the water temperature holding steady in the low-50s range. Human males are a proud bunch for sure, but pride is never going to beat hypothermia. Their pride got in the way of mentioning how miserable they were, along with being soaking wet. At the half way point of the day they were shaking, but never told me they were wet! It wasn't until we hit the boat ramp that they divulged the information. If they would have said something on the water, I could have done something about it.

Stuffed in a front hatch on my Haynie I keep a dry bag for these situations, and I would have gladly outfitted them in dry clothes, including Simms waders that dont leak. As a guide, I feel responsible for everyones safety and wellbeing on my boat. Therefore, my dry bag includes the following: dry towel, waders, heavy socks, underwear, long-johns top and bottom, fleece pants, long sleeve t-shirt, two fleece tops, and a thin rain jacket. I vacuum seal all of this to make it as small as possible, and then roll it in a dry bag, hopefully, never to be used. The famed Texas artist, Herb Booth, ran into the above scenario with me a couple of years ago. In the mail following our trip I received a beautiful book of his outdoor art that was signed, "Thanks for saving me from my leaky waders. Your preparedness was truly impressive. -Herb Booth

To this point, fishing has just been pretty average, but January has started giving up some brutes to make the on-the-water Boone and Crockett club. A trophy trout is in the eye of the beholder, but I start getting pretty excited when we are consistently breaking eight pounds. I have had a couple of clients accomplish this so far, and one fellow that lost a monster. I tried desperately to get the Boga on her, but she had the hook in the thin skin on the upper jaw and was just too powerful to contain before we could land her. The client firmly believes she was a state record but somewhere between nine and ten pounds was the reality of it. Great fish, regardless.

With all of the dead grass on the bottom of the bay floor, I am using the lightest jigheads possible to work my trusty Bass Assassin through big trout water. The Bass Assassin Pro Elite Series jig in 1/16-ounce is the bomb for doing this. It looks small, but has a lot of attitude and can handle anything in our bays. If there is any surface activity, MirrOlures Floating Fat Boy (Corky) have been great over areas of dead grass. If I'm fishing in an area that has healthier grass and more potholes, the original Corky and Fat Boy are the ticket. With brown tide still hanging around in Baffin, I'm sticking with pretty loud colors. The Upper Laguna is much clearer and we are switching to more natural colors in all lures when fishing closer to home.