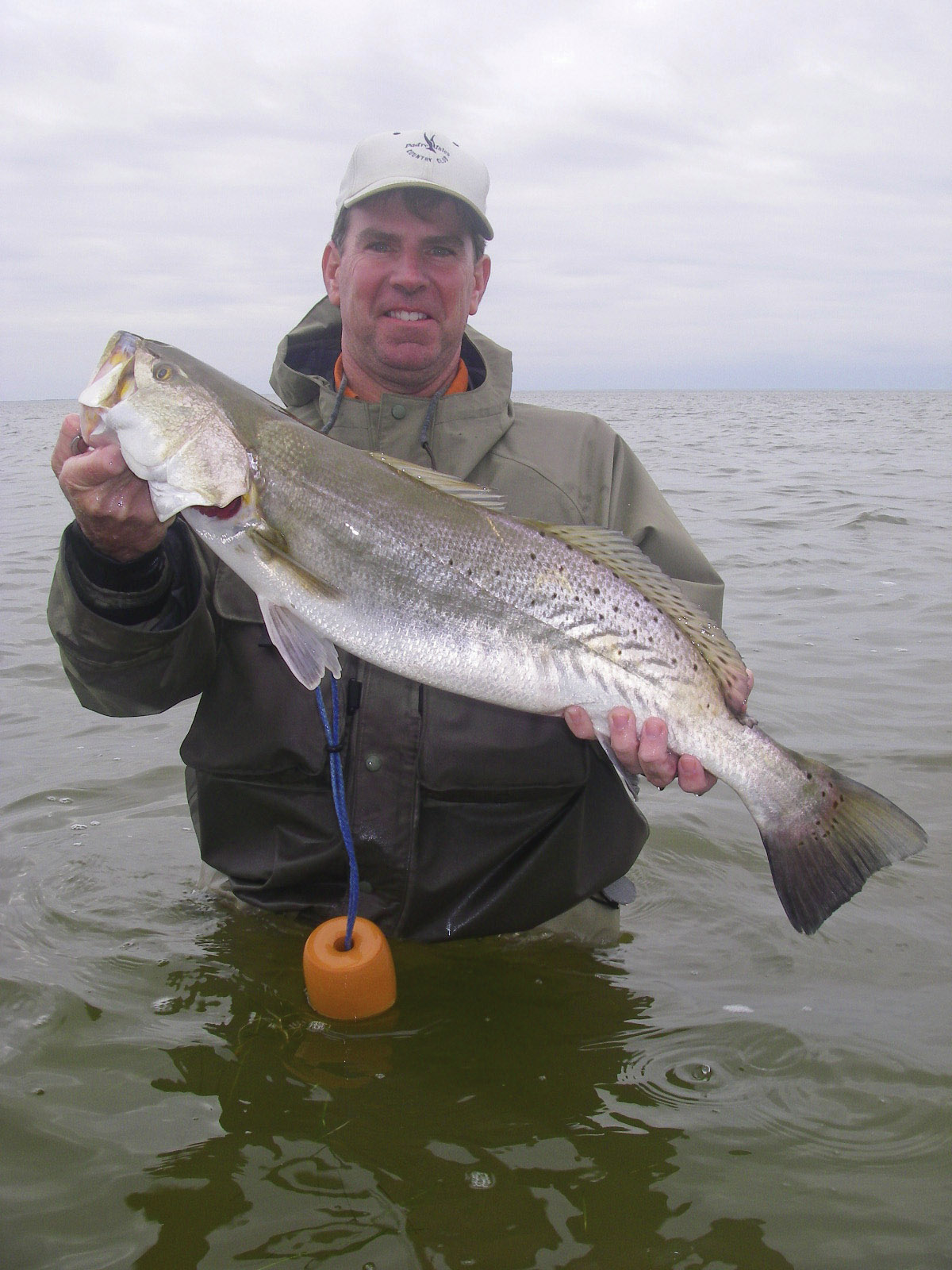 Come get you some!  Notice the extra definition in muscle tone and fat that we see at this time of year.
It seems like just yesterday that the story of Jim Wallace's new state record trout, out of Baffin Bay, broke all over the Texas coast. The date was February 6, 1996, almost 20 years ago. That lifetime catch was significant for a number of reasons. Number one, it solidified that February is a top month to land monster trout. Secondly, it would begin the well-warranted Corky lure craze that has yet to lose steam. In the end it would prove to be the catalyst that brought a whole new generation of diehard grinders to the table, young and old. The proof lies in the pudding, as the cold months of every year prior to 1999 only consisted of a couple of underpowered boats on any given day in Baffin. Almost twenty years later, the flats of Baffin are dotted with diehard enthusiasts, overpowered boats, and enough testosterone to make even Martina Navratilova a little nervous.

I officially open my books for charters around September 1 every year and you can bet that February dates get swooped up quick. If patterning trout over the years has taught me anything, it has taught me that late winter and early spring days are a must-do if you want the shot at a trophy trout. It is not going to happen every time you step in the water, but yours odds are greatly improved if you are fortunate enough to be down here now, wading in crotch deep water on the warming side of a front. As long as I have been doing this down here, I still get shakes of excitement just thinking about it. With all of the technological advances we live with today, I wish there was a way that y'all could just hit the rewind and play button on my memory and relive them with me. Trust me, it has been and will continue to be a great adventure in the outdoors.

My preferred method for seeking the best trout February has to offer typically begins with a muddy flat that contains both grass and slick/sandy areas. These areas abound throughout Baffin and the Upper Laguna; however, they do change annually due to new grass growing in and covering up areas that may have been ideal a year ago. The flats themselves are a constant, for the most part, so they are always a good starting point if you find yourself down here for the first time since last spring with no clue as to where to start. Once you have established the flat has all of the right ingredients, regarding bottom structure, just add a food supply, i.e. mullet, shad, perch, etc, to the recipe and you should be on your way towards some top shelf trout fishing.

A major key to daily success, and one that so many have a tough time with, is to slow your wade down and fish the area properly. When you are trying to catch a trout that makes up 1% of the total population it is very easy to walk right past them. On my boat this is easily resolved with a shock collar. A couple of buzzes to Mr. Hot Foot's neck and he usually complies within no time. Of course I'm joking, but it has been threatened to repeat offenders.
Now that the movement (and noise) through the water is at a minimum, make repeated casts in a fan shape to cover as much area as possible. One mistake I see on a daily basis is fishermen getting into the horrible routine of just constantly casting downwind. You have to move it around to be thorough. In fact, a crosswind cast is my favorite and most productive cast with any lure I choose to throw at the big 'uns. I make as many as ten to fifteen casts before I take another three to five steps, and then I start it all over again. Slow down, be patient, be confident, and you will be successful.

My go-to lure is the 5" Bass Assassin when I am picking the flats apart. The BA rigged on a 1/16 ounce jighead dominates when I am in "find 'em" mode of the process. This lure can be fished in all sections of the water column; high, low, fast, and slow. It is as lethal on big trout as any lure I know of and is a must have in the arsenal. Floating grass permitting, the MirrOlure Fat Boy is a big-time favorite to seek out the largest of the trout in the area, once the locating has been done.