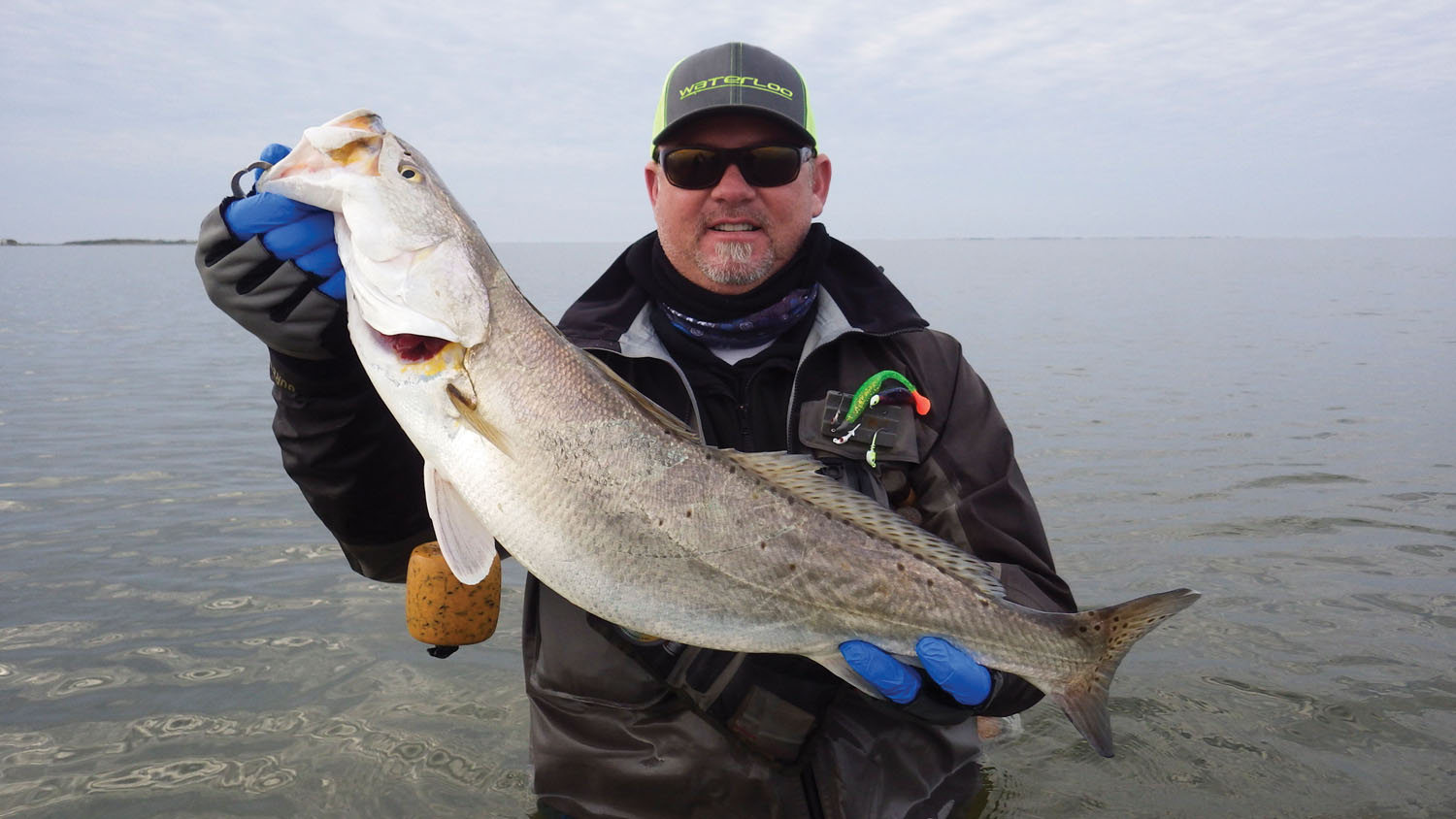 The holidays have passed, the bow has been back in its case for a month, what is left of the quail will go on to breed for another year, and I have been back in the full swing of monster trout fishing since December. As evidenced by all of the flashy boats showing up in the best big trout water on the gulf coast, everyone seems to have trophy trout on their mind.

This February marks the twentieth anniversary of Jim Wallace catching the new state record of 13lb-11oz in Baffin Bay that nudged out Mike Blackwood's previous record of 13lb-9oz that held for twenty-one years. I remember the news like it was yesterday. I headed straight for Roy's Bait and Tackle to confirm the truth or whether it was just another rumor. Rocky confirmed the rumor for me. "It's true," he said, "weighed in last nightthe new state record." I was in a state of awe, and, admittedly, a little bit jealous. Come to think of, I still am. Trout like Wallace and Blackwood have landed are simply mind-numbing. My cap is forever tipped to them.

One thing I know these two men have in common is that they fish hard. I do not claim to know either, but I am as observant as a wild cat, and have spent countless hours on the water. I have not run across Mr. Wallace in a long time, but he pounded the water of Baffin for many years. Many times while I would be night-fishing, I would hear another boat in the distance puttering around, only to recognize his white Kenner when the sun came up. Mind you, this was after he had broken the record, and he was still grinding it out like a wild man. Mr. Blackwood is still working at it hard, and I see him on a regular basis, always fishing by himself. He doesn't know me from Adam, but I like to brag on him to my clients when I see him poling that little boat backwards.

My client's will say something like, "Look at that guy poling that boat backwards, he must be new at this." I just grin and let them know, "That guy has about 40 years on you, held the state trout record for twenty-one years, and caught more big trout than most fishermen could ever imagine even live here." Their jaw will drop and they will start asking me questions about him that I cannot even begin to answer.

February is quite possibly the month big trout hunters take most seriously and also a pretty safe bet that you will have a legitimate shot at a personal best fish. By now, the weather has stabilized into a cold-water pattern that concentrates the fish. The warming southeast winds that occur between fronts can, and often will, be like a light switch flipping for big trout to pull up skinny and harass bait on the flats. The Baffin and Upper Laguna bay systems are chocked full of deep water areas that jump abruptly onto these shallow feeding areas. Any sign of bait activity will be a plus, and a good place to start. Bait is limited...a little means a lot during February!

All the rain over the past year has added an abundance of clean water to the system. No one knows what the long term effect will be as regards brown tide, but for now the water is as green and pretty as I have seen in the past five years, especially in Baffin. This will benefit everyone. Being able to see grass lines, edges, drop-offs, and rocks is a major plus for making every cast count towards a big hookup. The other big attribute of cleaner water is that boats and anglers should be more spread out due to "good water" options, not stacked on top of each other as has been the norm several years down here.

The 5" Bass Assassin is still my "find 'em" lure and continuously produces big trout for us. The Corky bite has improved dramatically over the past month and is just a lot of fun to fish when floating grass is not a nuisance. Days of off-colored water has me going a little deeper into the wade box and plastic inventory, and coming out with either a Bass Assassin Die Dapper or the 5" Turbo Shad rigged on a 1/8 oz. jig.