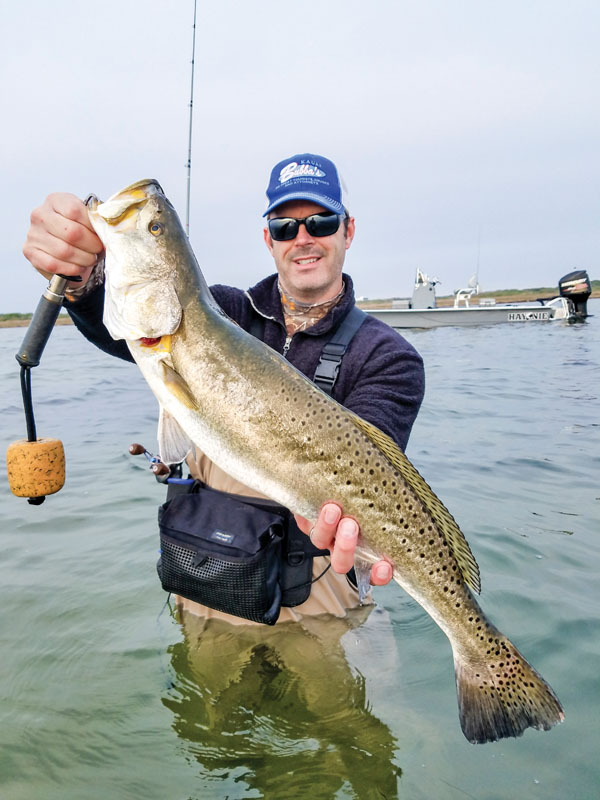 Big Chad Howard (6-7" for scale) with a gorgeous 8+ trout that he tricked with a Bone Diamond Bass Assassin. CPR

By now, for most of us, hunting season is over and big trout seems to be the talk of every meeting amongst friends. It happens every February, and for good reason. Ol' fabled February has provided many of the greatest fishing tales of giant trout caught and lost. Lord knows I've had my personal share, along with elated clients watching the Boga Grip snatch the jaw of giant trout, or watching the hooks rip lose before we can close the deal. Either way, it keeps us all coming back for more.

I was about 30 years old when I fished my first tournament. It was promoted by the late Tom Nix, founder of Saltwater Angler. Tom's vision led him to organize the first lures-only, live-weigh tournament. The norm today for big trout events, and cornerstone of his legacy.

The first Baffin Bash was staged in February and the field was stacked with every heavy-hitter on the Texas coast. Most of the top guides that were featured in print media (no social media then) showed up. The late Jim Wallace (state record holder), and many local stud fishermen rounded out the field. For my partner (David A. Murray) and me, it was damn intimidating to walk into that crowd. I have always been a confident guy, but will admit I was a timid cat, and questioned our decision to lay our money down to play. A few more bottles of cold-bubbly confidence and we finally ponied up.

In typical tournament fashion, the first day weather consisted of sustained winds of 25+, with stronger gusts. Our little 20' boat was by far the smallest in the field, and the slowest. We braved the elements and took a full-hour beating to reach our first stop. In hindsight, we should have just fished from the dock and not taken such a beating. We zeroed. But to our great surprise, considering the awesome field, only two teams weighed a fish that day. As crazy as it seemed, and we joked, we were still near the top of the leaderboard.

The second day gave us different weather. Calm 'til midmorning, when a big norther was due. We did a mad dash for a rock pile that we knew some big fish were living on. I dropped David A. at one end of the rocks and idled to the other, planning to meet in the middle.

Only ten yards out of the boat I could see David A. fighting a fish, then another, and another. I knew he was throwing an Original Corky as was I, but failed to get a bite the whole wade. There's no "I" in team, so I was just happy my buddy was catching good. As we came together I could see a look on David's face, and it wasn't the good kind. Turns out that he lost some great fish, one out of his hand, and never got one on the stringer. I was heartbroken believing he had a full stringer.

We spoke briefly and he insisted on getting the boat and putting me where the fish were. Well, I too managed to lose the first good one and thought it just wasn't our day. A few casts later I got that old Corky "double-tap thump" and landed a 7.5 pounder. A whole bunch of fish too-short-to-weigh later, I caught another in the 5.5- to 6-pound range. Everything was looking up except the weather. The wind starting cranking from the north and the bite came to a halt. We loaded the fish into the makeshift livewell and were very happy that we hadn't zeroed again.

After another long ride to weigh-in, we learned that most teams, including the leaders, had struck out on day two. We ended up taking the lead and winning our first tournament. We were elated about the win, but no one else really seemed to care except Capt. Jay Watkins. Jay was the only man, besides Tom Nix, that congratulated us on our win.

This is, by no means, a dig on the other competitors, but a compliment to Jay's character. Before social media, people read articles to gain knowledge, and I was and still am, a huge Jay Watkins fan. I read everything he wrote in the old Saltwater Angler at least ten times. So, having your fishing hero congratulate you was a bigger deal than the $5,000 first place check.

Fast forward 17 years. Jay and I have become the closest of friends. Our respect for each other's fishing prowess is a given, but his mentoring me in the way that I guide and conduct business has been priceless. Our personal lives seem to get discussed more now than fishing, but that, to me, is the natural progression of a true friendship. Everyone should be so lucky.