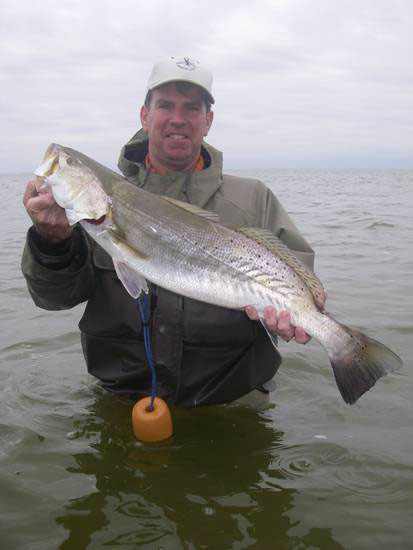 Russ Norwood with a great December trout on a Corky Fatboy. RELEASED, of course!
Some of the largest, healthiest specimens we'll see all year will come from the first month of the year. The trout from this time of year are brutes with big shoulders, bad attitudes, fat leavened bellies, gorging on mullet up to fifteen inches, and even small trout if they should get in the way. January holds many great memories for myself, clients, and friends, and this looks to be a banner one.
The number one thing that has me excited more this year than those of recent memory is the water clarity. I can actually see the structure to which we are casting. Growing up as a bass fisherman, I learned early-on that reading structure is the most critical element in whether you will be catching fish or just casting for the chance at a fish. Dissecting a piece of structure is pretty near impossible if you cannot see it; hence, the excitement about the water clarity on my part.

Last year found us covered up in ugly water, and found me asking clients just to cast and trust me as to the location of the targets. This was a routine that became problematic in the brown tide, as it is hard to explain what you are doing without the visual aid of seeing the target. More often than not we were rewarded with success, but that is attributable to being in the greatest trophy trout fishery on the planet and patience and trust that the clients had placed in me when we sometimes went hours without a bite.

Just thinking about it, and writing it down makes the hair stand on the back of my neck. Although pleased with the days we found success, Iwould trade one in here and there for consistent clean water, and not have to deal with the brown tide.No doubt, the fish in the Upper Laguna and Baffin have switched intowinter mode. Late November and early December gave us obvious signs of what was coming, as the shoulders on the trout became thicker, and the infamous Corky was moved up to "Plan A" . Further signs have been the bait fish and trout staying much closer to muddy bottoms as the average daily water temperature hovers in the mid to high 50's. For the winter trout fishermen, this is GOOD STUFF!

The number one lure in the area is the 5" Bass Assassin. Day in and day out I find myself completely dedicated to this lure until I start getting the solid bites that we are looking for. Once that takes place, I quickly switch to a Corky to try and taunt the biggest in the area.

Bait fish are not as prevalent in January, but that can be a positive if you look at the cup as half full instead of half empty. Find any type of flittering movement on the right structure, and you have most likely stumbled into some presence of predators. In the colder winter months my time fishing is often found in areas that show minimal signs of bait activity. Literally, three or four flipping mullet, over an hour or two, may be all that it takes to keep my feet planted to the rightstructure for hours.

When only a few mullet are above the surface, pay very close attention to what they are doing as they come out of the water. Not every mullet is created equal. I can hear it now, "What the Hell do you mean? A mullet is a mullet." I assure you, it is not! A keen eye will detect a loping mullet from a scared one. If the bait fish looks like a rock that was just skipped across the water or lands on its back, instead of its belly, you had better be casting in that area. One faint cast will not do the trick on most occasions. Stay still and try up to ten casts in the immediate area. Keep your feet planted, and your patience often pays off.

Please avoid running those boats on the shorelines that others are fishing and please practice catch and release.