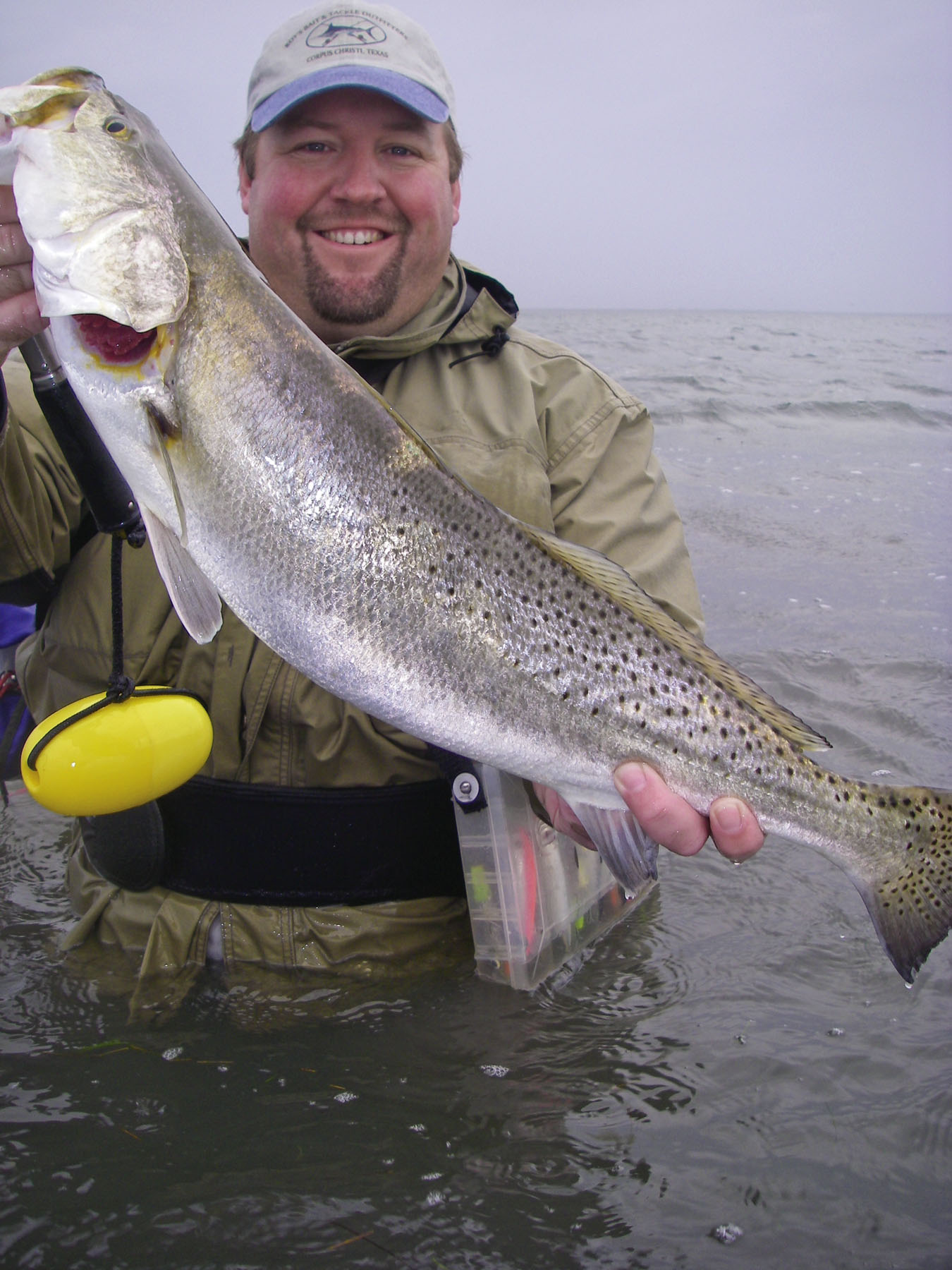 Trent
As predicted, cold weather fishing has been good to great south of the JFK Causeway. We have been blessed with some great trout that look like they have swallowed a football. Some are so fat that it just amazes me that they are still feeding, but winter is a time of survival, and whatever they perceive as an easy meal will be in their crosshairs.

Water conditions in the Upper Laguna are extremely clear, in fact, they are just too clear in my opinion. You can catch fish in it, but you had better be making a stealthy wade, and long casts. About the only time it turns milky green is after a blistering north wind, but that usually has high barometric pressure associated with it, and a tendency to lock the bite down. Baffin is more stained, and more fishable in my opinion. Each front seems to clear the water more and more, but it still has that green algae look where the trout will not be spooked too easily. These conditions will prevail throughout January and into early February. As the southeast wind returns, the Upper Laguna will take on take on that classic "trout green" look, and Hell should break loose in both the Upper Laguna and Baffin.

I was recently fishing a windy day with some senior gentlemen, and the bite was better than good. The depth of the wade required us to cast crosswind to potholes. All of the gents could make the proper cast, but could not account for the loop that would build in their line on the release of the cast. They were missing fish on about every fifth cast, and the fish caught were mostly hooked deep due their not being able to feel the bite. The problem was that they insisted on using mono versus braid, although I had reels with braid rigged up for them. We had to wade single file, I was the last in line, and barking out structure points to cast to that would almost insure a solid ka-thunk from a trout slurping down a plastic lure. Many times during the day one would call out, "Captain, there are no fish in that sand hole." And in almost every case I would follow them up from the rear and catch a good trout off of the piece of structure that they had been casting to and missing fish. I am convinced that the only difference is that they could not detect the strike with their super-stretchy mono. One of the gentlemen finally caved, and decided to try the braid. The results were immediate, and I spent the rest of the day taking his picture, while he took jabs at his buddies.

I have people ask me all of the time, "What can I do to become a better fisherman?" There is always the obvious response of time on the water, paying attention, quality gear, etc., but the ONLY thing I can think of that delivers instant results is switching from mono to braid. The attributes of braid are huge; instant feel when you get a strike, the detection of the most subtle hits, no line memory, no line twist, much stronger, small diameter, super long shelf life, and seconds as a great dental floss option after a cold BBQ sandwich or a barbacoa taco on the boat. (Bet you weren't expecting that.)

Trout are in full-on winter mode now, fat, and in hiding as fronts blow through. Short of printing their pictures on the back of milk cartons, we have been hard on the hunt everyday, when the weather allows, to stay on top of them. The hard work has paid off, the pattern has been set, and we are now being rewarded with some big opportunities in the catching part of fishing. I love this time of year, and the hardcore crowd that shows up to take part of Baffin's bounty. If winter fishing for giant trout is not something you are familiar with, it needs to be, and I invite you down to partake in what I consider the best kind of trophy hunt.

My favorite tools of the trade for January are the 6'6" Waterloo HP Slam Mag 2, Daiwa Steez reel, 30# braided line, 25# fluorocarbon shock leader (uni to uni connection knot, 5" Bass Assassins in dark colors such as plum and morning glory rigged on the new 1/8 oz. ProElite jighead, a wide array of Paul Brown Original Fatboys by MirrOlure, and dressed for the elements in Simms layering and G3 waders.

"In communities where men build ships for their sons to fish or fight from, quality is never a problem." J. A. Denver