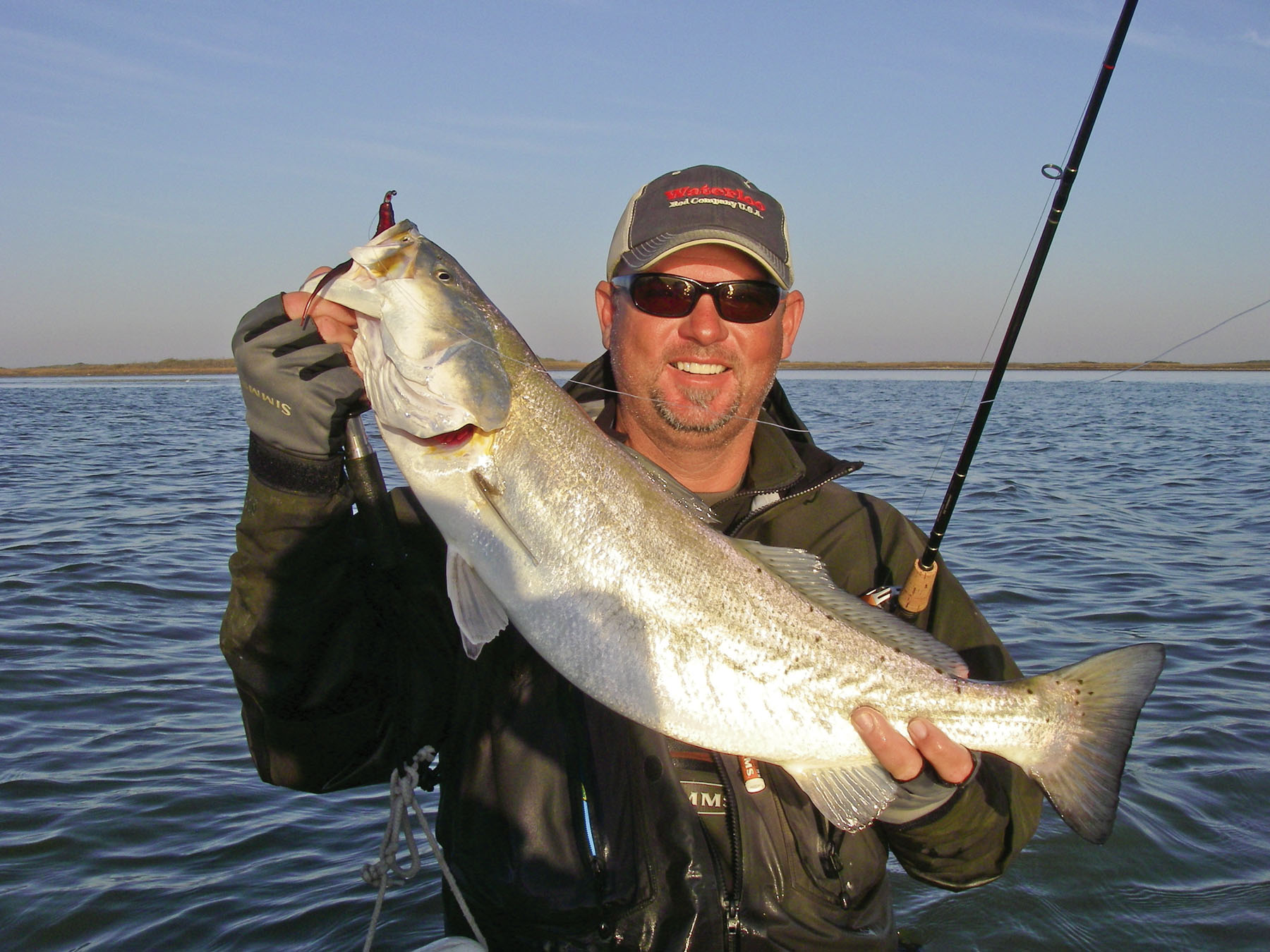 Author with 10.5 pound January pig on red shad Bass Assassin. Released!
Well 2014 just kind of blew right past us. I hope the closing of the year has found all of you to be enjoying great health, happy family and prosperity. Getting over the food hangover from the holidays is about my biggest worry of late. But nothing that a few long wades back to the boat won't fix, I'm sure.

Mother Nature has graced us with some colder than average weather toward the end of 2014. By all accounts it looks like the 2015 winter fishing season will be another cold one. There were a couple of days in 2014 that I begged my clients not to show up due to ridiculously cold air and water temperatures. Most heeded the advice while others refused to not get out there and give it a try. As much as I respect their desire to try for a big trout, regardless of conditions, there are just some days that are not worth the effort.

Those die-hards would usually last one or two wades at best before they threw in the towel, the wrath of the icy north wind being too much to bear, even with the best of gear.

"Captain, I'm sorry we didn't heed your advice to cancel; it was definitely a bad decision on our part. Old Joe over there tripped in a hole and is now wet and turning blue. Maybe we should head back?" I agreed and made the run back to Bluff's Landing to warm up with some coffee.

Clients should understand that every guide likes to fish and make a living doing it. Losing a day's pay is certainly not in the business plan. So when a guide tells you to save your money for another day, you should listen to that advice, and know that he is sacrificing income for the betterment of the client experience. Whether it seems good or bad.

As of this writing the water quality in Baffin remains well below average. The good news is that the Laguna looks awesome, and that water is headed south into Baffin with each passing front. This year being so similar in weather pattern as compared to last, I suspect the waters will clear up in Baffin as far west as East Kleberg Point in the near future. The mouth of the bay, and further south in the Land Cut area, should clear up as well. I've heard numerous reports that there is some good water in the back of the bay although I have not seen it for myself.

With winter starting early again the trout are already settling in their cold-water ways. In fact, we have had some great days through November and into December on trout that would not normally be found where we are catching them–some exceptionally fat and strong fish.

A few of the larger trout have had smaller trout's tails protruding from their gullets on the Boga. This is not uncommon, by any means, large trout cannibalize their own species regularly during the colder months. With less bait (mullet) available, a twelve inch trout provides much more nutrition than six or eight little pinfish, and they expend less energy obtaining it. Makes sense to me!

As Baffin regulars know, winter trout fishing has become hugely popular. There were days in 2014 that I was just overwhelmed by how many boats would set up and wade in one small area. I avoid such places at all costs. Saying that, there are many days that I will be the first in an area to start the morning. A second boat will show up, and set up a respectful distance away. Then comes the third boat who gets in between because they think the other two groups must know something they don't. After that the scene develops like a bunch of seagulls behind a shrimp trawler with boats falling in from every direction. It can get ridiculous at times.

The point I'm trying to make here is that there is a bunch of productive water out there. Be respectful of waders that have already established themselves. If you feel that you MUST fish near them, enter and exit using a trolling motor. Better yet, go explore new areas and add something to your arsenal. Some of the best discoveries and catches I have ever made have been on days when I left an area due to getting "boxed in."