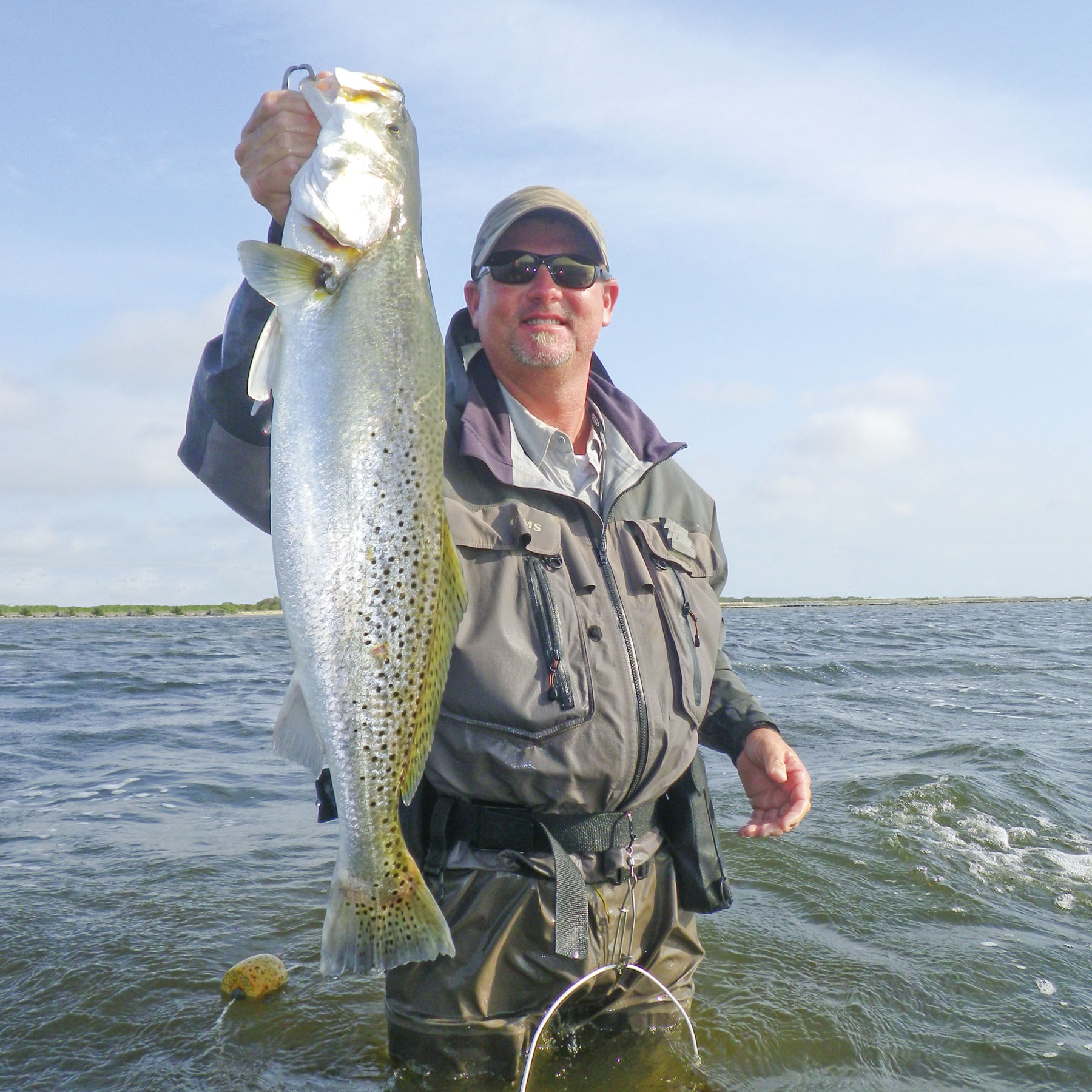 While I prefer not using photos of myself in my articles; a 32
The weather patterns have been crazy down here, as they have been for the rest of the Gulf coast. This is this first time in memory that I have been sporting Simms waders into the month of May, with another cold front fixing to hit us in a few days. To say that it has had an effect on consistent fishing would be an understatement, at best. Just when you think you have it all figured out, mother nature throws you a curve ball of gusty north wind that changes everything regarding what the trout are doing. The upside is that I have had 1.5" of rain in a week's time, and my grass is very grateful for that.

The small rains we are getting are not doing anything to fight off the brown tide in Baffin. In fact, the small amounts of runoff seem to have a more negative affect than a positive one to the naked eye. Salt counts in Baffin are super high due to the drought we have been fighting for the last couple of years, and short of hurricane or tropical depression, I do not see it clearing up any time soon. As mentioned in last month's article the water is of much better quality in the Upper Laguna, and this is where I continue to spend the majority of my time. Like an addict, my mind and body want to be in amongst the rocks of Baffin, but I know it is not the best place for me to be successful with my clients. A good tropical depression is much needed!

The spring tide that rolled in brought all of the bait as promised, and game fish as well. If you are adamant to fish your favorite spot, and you find that there are no mullet flipping around in it, you'd be best served to crank up the outboard and move along until you find them. With all of the bait in the bay system, fishing dead water is not going to fare well for you. Whether on the flats, a shoreline or sandbar bait has to be present to have great success down here, especially during this time of year. Fish with your eyes before you ever make a cast - it works!
I expect to continue catching fish on large expanses of flats here in the Upper Laguna through June, and hopefully into July. The King Ranch shoreline (KRS) has some real stud trout on it, and will continue to produce throughout the summer. The one thing about the KRS is that you need to fish it early, during low light conditions. The water on the KRS is super clear, and they just get really hard to catch after the sun comes up. Saying that, it is dang sure worth a try as some of our largest trout of the year have been taken during the early morning hours, say before 8:30 AM. From there I am moving off to mid-bay breaks and dropoffs and flats that have milky green water, and mullet. This recipe has worked well for me of late, and if history repeats itself, it will continue on into the summer months.

Lure selection has not changed much. The 5" Bass Assassin in "Houdini" is my top choice in clear water conditions when throwing plastic. As the water murk's up, I like darker shades like plum, red/gold shiner, and morning glory. High sun, and murky water is the perfect opportunity to throw solid white or "Alwife" at them. The topwater bite can be good throughout the day, as long as you have a lot of bait present. My top choice is the MirrOlure She Dog when its choppy on the surface and the Paul Brown Fat Boy (floater) when is relatively calm.
As June and the rest of summer creeps up on us, it also begins croaker season. I could care less what anyone uses for bait as they enjoy a day of fishing, but one thing we all need to consider is the resource. If you think it's an endless supply, you need to be living in a cave making arrowheads to hunt with and feed yourself. The bottom line is, regardless of how you choose to catch them, we need to put some back. Keep enough to have a good meal or two, and practice catch and release. A photograph is much more memorable two years down the road than a bunch of freezer burned fillets.