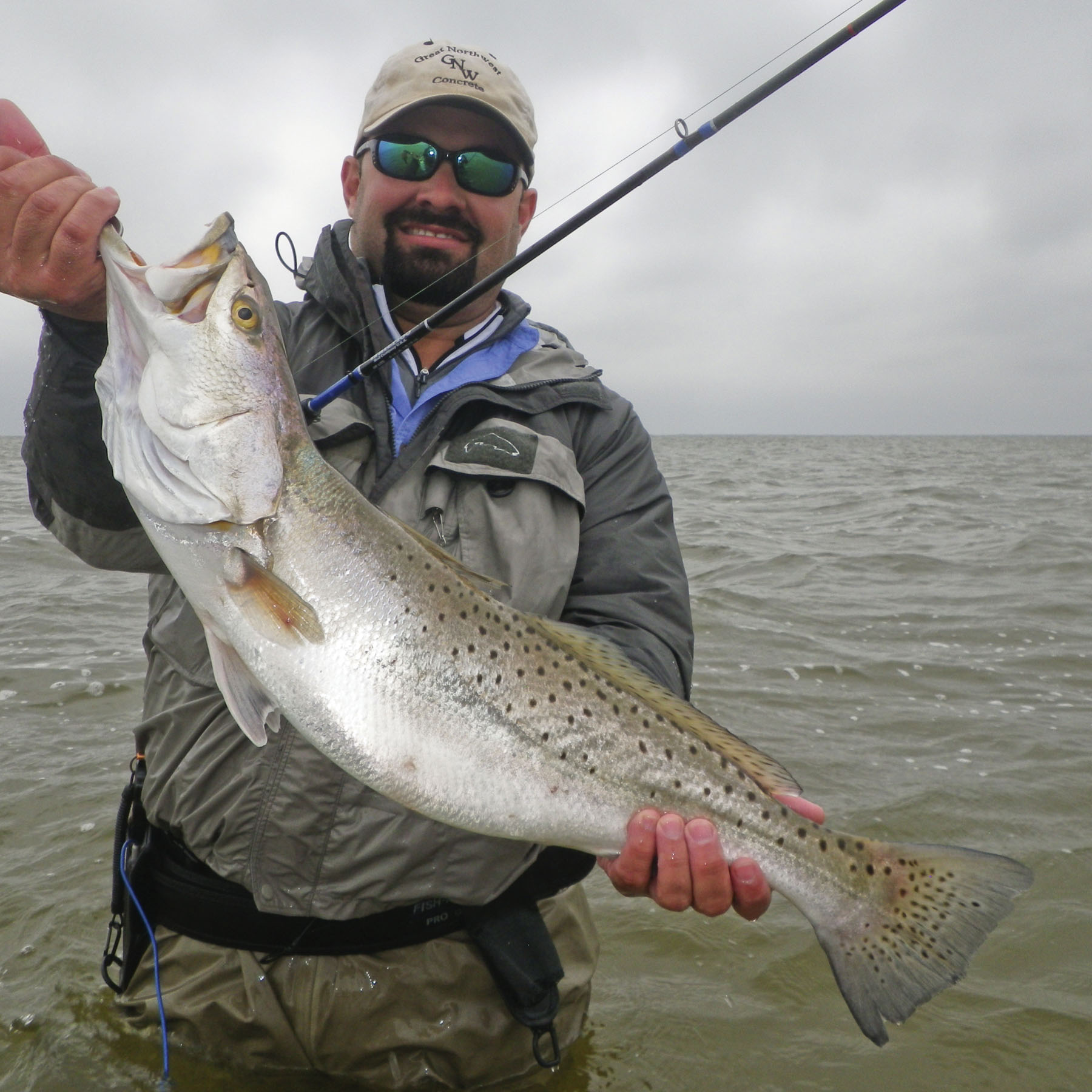 Will Truss with a big Baffin trout caught on a Sea Shad Bass Assassin. Released!
The pace at which 2014 is slipping by is mindboggling. It seems just yesterday we were freezing our tails off and now we are on a slow smoker. I must say that cold fronts into May came as a surprise and sporting SIMMS that late in the year was quite unusual. Oh what a crazy winter and spring it has been. It looks like that is all finally and thankfully behind us now and we have a consistent enough weather pattern to make solid decisions on when and where to intersect the big trout and reds.

Water quality is again a major concern here on the Upper Laguna and Baffin. The cold winter and spring of 2014 seemed to make the dreaded algal bloom (brown tide) become dormant and the waters were very clear for a long time. However, the blooms have returned with the rise in water temperatures and tea-colored water now prevails. We were optimistic; praying the spring tides rolling in from down south would give us a new shot of life and green waterproblem is though, Port Mansfield has been battling water quality issues of their own since last fall. Well the spring tides arrived as expected and did bring new life in the form of bait and gamefish; but also brought more stained water to add to our pre-existing algal problems.

We are still catching fish in the stuff but it is frustrating to a structure fisherman to be blindfolded by brown tide and not able to identify the potholes in front of us or the exact location of rock piles within casting distance. This is not our first trip down this road and, unfortunately, will likely not be the last. I am often asked what it is going to take to clear it up and the answer is always the same, "A storma really big storm." A hurricane would be devastating to the area economically but I cannot envision anything short of one that would completely flush these bays and rid us of the problem.

I have been fishing in and dealing with brown tide since it first originated in 1989. Overcoming this obstacle has most likely made me a better fisherman in the long run. It has certainly taught me to think outside the box. Some of my most trusted techniques for getting strikes and catching will be sent to the bullpen for now and a new set of game winners will be taking the mound.

I have a deep affection for the 5" Bass Assassin. No doubt, it is the money maker in my box. A close cousin, the 5" Assassin Sea Shad (SS) is now my go-to lure when utilizing plastics during these algal blooms. The SS is similar in style with one major difference; it has a small paddle at the tail versus the straight bodied (rat tail) bait I normally use. The key to getting action on this lure is to make that tail vibrate. You can slow-roll it and simply use it as a swimbait or with long, slow pumps in more of standard jigging technique. Both applications are very effective.

The next choice is a loud topwater. Anything in the MirrOlure "Dog" series will work just fine. I am pretty big on the chartreuse/chrome combination, but bone and white are also must-haves for me.

On a side note; something that drives me nuts is when I see clients working topwater lures in a typically fast motion, never changing speed, or more importantly, never pausing the lure. Keep in mind that when you are using a surface plug you are trying to imitate a wounded and struggling baitfish. Something wounded is not going to cut across 60 yards of water without stopping to regain strength before moving on. By adding many pauses you will find that you will get far more strikes than just constantly walking the dog.

Now don't laugh at me on this one as I am being dead serious. The old Mansfield Mauler cork setup is about as effective a lure as you will find during stained water situations. I know it's not pretty or glamorous but it is deadly. I prefer to rig mine with 18"-24" leader and a 1/8 ounce jighead. Color choice is not that big of a deal to me as the slashing of the cork will bring them close enough to see most anything you have dangling under it.