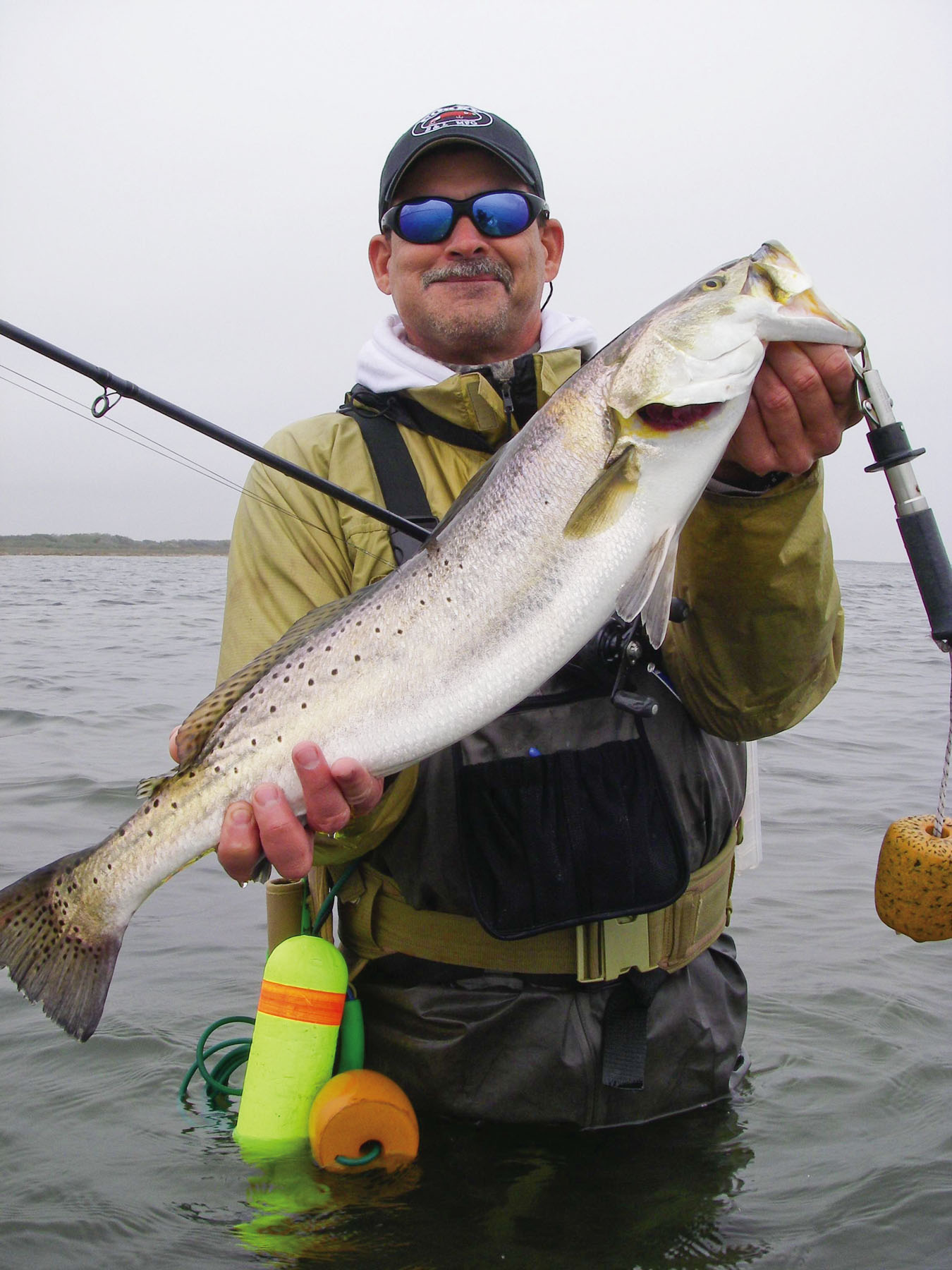 Mark Rohne with a trout that went way over thirty inches on a MirrOlure Corky Fatboy; CPR!
Before I get into what can be expected in the month of March, I have to vent about TPWD Coastal Fisheries Division and the recommendation to the commissioners by division director Robin Riechers to take no action at this time to reduce the current liberal bag limits of ten speckled trout per day. Really? With saltwater stamp sales approaching 1.2 million (all time high), record pressure on the fish, and some bay systems showing as much as a 60% decline in the trout fishery, status quo has prevailed yet again. Sounds like quality management to me, not! Maybe they will become proactive when it hits 90%. Bottom line here is that TPWD knows that they have this deal screwed up and have painted themselves into a corner of political correctness letting public opinion prevail over science. It is my opinion that they are scared to fight their way out of this. Boy, wouldn't life be a dandy if all of us could take the easy way out on our jobs every day?

On to fishing:
January and February produced some nice, heavy catches for me personally and also my clients. The largest so far this year was a ten and a half pound trout that was short of thirty inches and built like a fire hydrant. As we roll into March, I truly expect to see a fish larger than that come to the Boga Grip. It is no secret that true trophy class fish make up less than one percent of the trout population and the chance of catching one requires lots of time on the water, patience, and preparation. March is the time of the year that reminds me of Clint Eastwood's spaghetti western, "The good, the bad, and the ugly." She will give it all to us this month and we will have to be prepared for inclement fishing conditions, rude behavior, great acts of courtesy, muddy water, crazy shifting winds, and some of the biggest trout of the year. March trout will have those big winter shoulders with the addition of early developing roe. Find the right one, with a full belly, and there will be some personal-best stories flying around at the boat launch.

March always brings a lot of southeast wind. I've gotten use to it over the years, but there are always those days when you just want to yell, "STOP!" When it gets over 30 mph, it can be pretty tough fishing, but under that, it can be very doable. I believe it beats up our minds first, and the fish later. Point being you can catch them if you work for them, and don't let the conditions beat you down. Shallow flats that lie adjacent to windward shorelines are a favorite for me and, luckily for us, we have miles and miles of them from the JFK Causeway to the south end of Rocky Slough, and further back into the Cayo Del Grullo and Laguna Salada.

With very little tidal movement down here, the fish rely on the wind to move the bait for them. Trout know every contour line across every inch of the bay floor and use it to their favor to trap the mullet and shrimp against these windward barriers. These trout routes are hard to spot in muddy water, and you may never know they were there if you are not intimately familiar with or have never waded through the area thoroughly. All is not lost though as the mullet will let you know where to be. When fishing these conditions, do not allow yourself to develop tunnel vision on one area where you may have caught a fish before. Scan the shoreline and nearby spoil islands for the most activity and, if need be, relocate the 100 to 500 yards it takes to get to where the bait is concentrated.

I've never been real big on paddletail-type plastics for trout, but if there is ever a time that they will whack some big trout, it is now when we have less than favorable water clarity. My go-to has always been the Bass Assassin Turbo Shad, but this year they have come out with a lure they are calling the "Die Dapper" that has a very large and aggressive tail with exceptional vibration. The lure also has a more robust body but still retains the flexibility that makes a Bass Assassin so life-like in the water. MirrOlure's PBO (Corky) in the Fatboy design is also a top choice due to the water it displaces when walking the dog under the surface. Loud topwater lures such as She Dog and He Dog will also make the favorites list. My top color choices in stained water will be very dark or super bright on any and all lures I choose to cast to them.

"If a man knows not what harbor he seeks, any wind is the right wind." -Lucius Annaeus Seneca