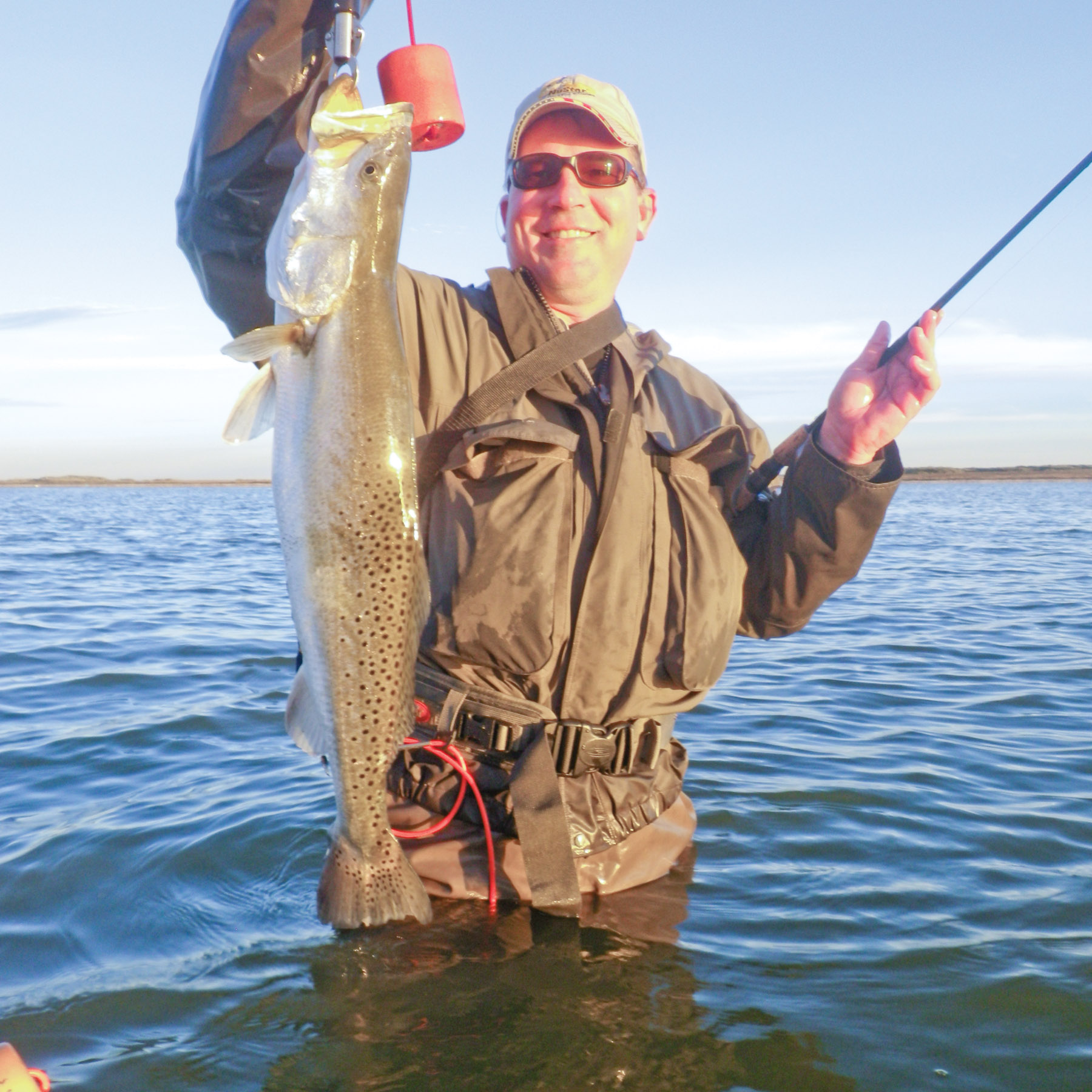 Steven Schmidt with a 30+ weighing in close to 9 pounds - Chicken on a Chain Bass Assassin – Released!

Ah... March spring wind is already rearing its ugly head here on Baffin and the Upper Laguna. I had to cancel today due to some typical weather that challenges us every spring. Yesterday blew 40 mph from the southeast, and today is a cold 35 mph sustained from the north. As the old Coastal Bend saying goes, "If you don't like the weather down here... just give it ten minutes and it will change." So true, and for the clients that have next seven days booked, perfect conditions. Gotta love it.

I have mentioned the brown tide numerous times over the past year. I'm glad to announce that I attended a meeting the other day that concluded with a vote to provide initial funding to begin a serious study into the algal bloom that has affected all aspects of Baffin, from the bottom end of the food chain to the recreational angler. Coastal Bend Bays & Estuaries Program (CBBEP) will be conducting a three year study into the cause and effect of the bloom. CBBEP research will require additional funding throughout the three year period; hopefully, to be provided for by grants, TPWD, and conservation groups such as CCA-TX (Coastal Conservation Association-Texas) and Corpus Christi's SEA (Saltwater-fisheries Enhancement Association).

The SCB Baffin Cup just had its 2013 tournament out of Bluff's Landing here in Corpus Christi. The two day tournament had a three fish bag limit, and produced some heavy stringers of big trout. Mark Holt and I (Team Haynie) partnered again as defending champs from 2012, but we could not repeat in 2013. Jamie Pinter and Mike Larue took top honors, with a better than 18-lb average for two days of grinding. A six pound average over two days of fishing a tournament is a great accomplishment, and they were rewarded with a little better than $12,000 for their hard work. Congrats to them. Special thanks to Mike Beers and Bluffs Landing Marina for using their large, oxygenated, bait tanks to overnight the trout in to insure their survival. Between the marina and the use of Chris Thompson's (unofficial mayor of Flour Bluff) boat, the majority of the big trout were released very healthy back into the Laguna. The fish that did not make it were cleaned and bagged for the women's shelter here in Corpus.

I expect the fishing in March to continue to gain strength and produce some "bigs" as we call them. March trout are as about as fat and healthy as they ever get in the Laguna Madre and Baffin. As this winter continues to be unusually warm, my big fish approach will continue to be up shallow in thigh deep water or less. Not to say you will not catch some out deeper, but my money is on the skinny stuff for the most chances at a legit giant. The conditions will dictate my lure selection, and as a general rule I like the 5" Bass Assassin or MirrOlure Fatboy (Corky) in calm to light winds. Add a little chop and some off-colored water and the topwater starts getting lots of air time. If there is plenty of wind and no topwater bite, I am quickly back on the Bass Assassin to grind it out and try and hit them in the head for a reaction strike.

As the water continues to warm, the big girls are going to scatter out and not be as concentrated as they have been during the cold snaps. Larger areas of shorelines and flats will have to be investigated, along with a few more steps in the process (as in moving your feet). Before you burn up a lot of precious energy, let your eyes do all the work for your feet. Take a few minutes before you get out of the boat and find what part of the shoreline or flat has most bait activity, keeping in mind that a handful of sighted baitfish can go a long way this time of year. Another thing to keep in mind is small male trout. This warmer weather will have them in the mood for you know what, and they will be pestering the big females from here through May. If you are catching a bunch of these overzealous little males, more times than not, it is a great indication that a large sow trout is in the neighborhood.

See y'all out there, but let's not get close enough to talk.