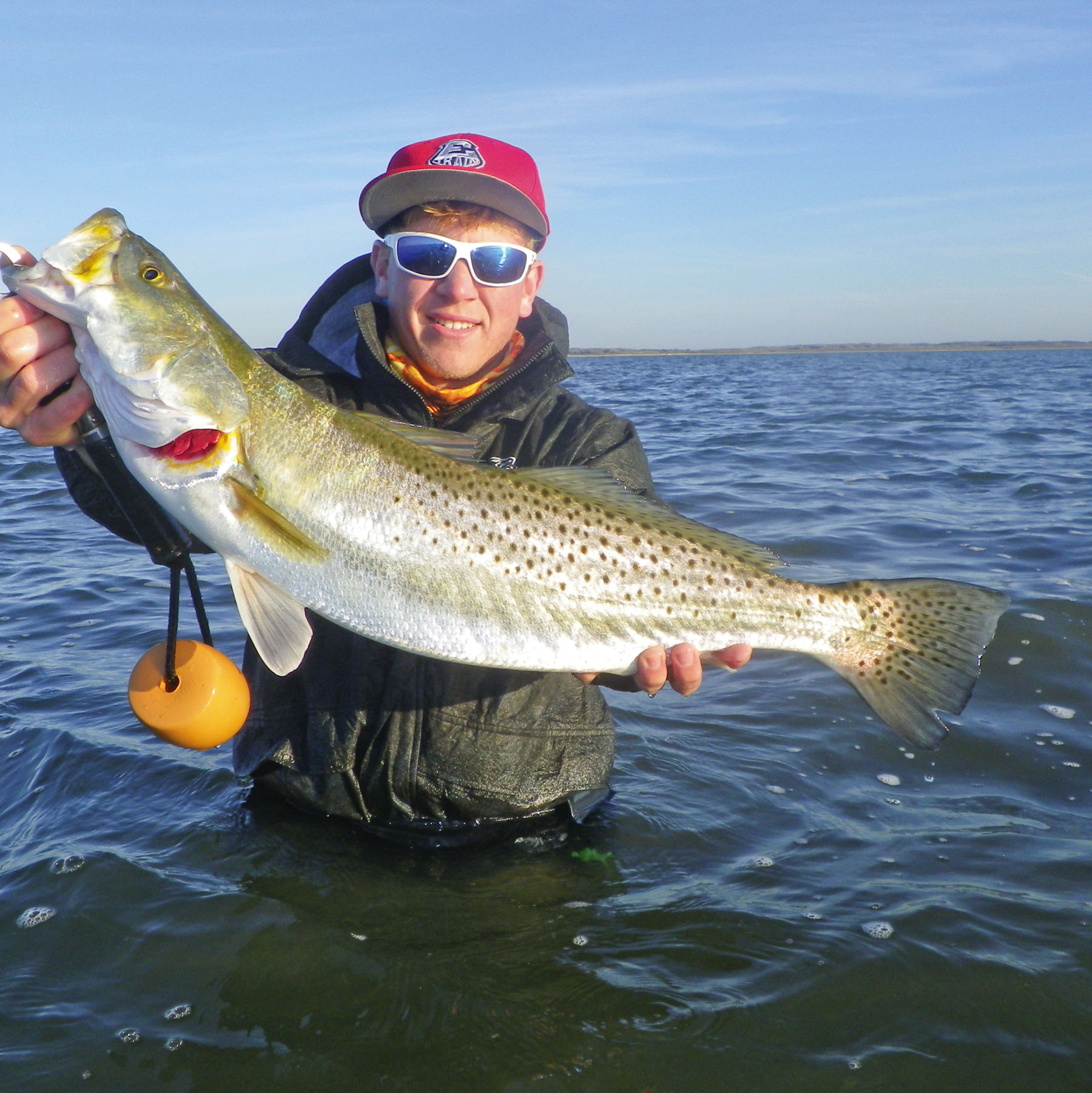 One of two big trout caught on a recent cold day by 15 year-old Colton Blackwell.  I'm not sure who was more proud; Colton, his dad, Johnny, or me.  It was fun to watch a determined young man get it done!
Thus far 2014 has been the best year in Baffin since the brown tide kicked off in the spring of 2011. We are experiencing our first real winter in three years and the trout seem to be responding to it predictably well. Revisiting haunts that have not held fish in recent years now finds them "coming home" like they have been on an extended vacation.

Quoting Augustus McCrae in the classic western movie Lonesome Dove, "There is nothing finer than riding a good horse across new country." That line pretty much sums up how I feel every time I pull up on some old (but new) ground and find mullet flipping and big trout eating in trout-green water.

March is a magical month in Baffin Bay and the Laguna Madre. Historically it is the month of the fattest trout of the year. If you are lucky enough to connect up with one of these big girls you will most likely be doing it in some of the heaviest southeast winds of the calendar year. Saying that, don't let the winds bother you too much. Baffin is essentially landlocked, being so far from the passes connecting the bays to the gulf. The vast majority of water movement in this area is wind-driven. A good breeze generally gets the fish into a feeding mode and puts a stain on the crystal-clear water which makes the trout much less spooky. Personally, I'm more scared of slick calm days than days approaching 25-30 mph southeast wind.

As cold as 2014 has been I expect the best trout to still be relating to muddy flats with accessible deep water nearby. This pattern has proven very effective to date and should continue on through March. As the cool days begin to heat up, look for good numbers of trout to also be moving towards sandy and shallow areas in pursuit of mullet that are trying to get as close to the sun as possible. This is especially important in the afternoon, just before the sun sets. If you are a grinder who has the gumption to fish from sunup to sundown, the payoff could be huge.

Day in and day out the 5" Bass Assassin (rat tail) reigns supreme in locating the fish. When the water becomes windblown and a bit off-color, this bait becomes the go-to lure for me and the one I recommend to clients. Choosing colors varies due to water clarity; however, my mainstays are: Morning Glory, Plum, Sweet Pea, Mama's 14K, Red Shad, and Hammer Time. We are rigging the straight tails on 1/16 ounce jigheads, and the swim tails (sea shad) on 1/8s to get the most action out of them. Not to be forgotten is the MirrOlure Fat Boy (Corky). The Fat Boy has just been lethal on the big girls this year, and will continue to get an abundance of play time as long as the mullet are flipping around acting scared.

In the age of modern technology, go fast boats and social media, every time a picture of a solid fish is posted online you can expect more boats to hit the area within 24 hours. We are all after the same thing but a little respect and courtesy would go a long way. I guess it is the same in every bay system, but the departure of sporting etiquette, in our area, just baffles me over the past five years.

For the record, there is no one group that is any more guilty than the other, i.e., some guides are as bad, if not worse, than the weekender trying to make a run at a big trout. Following are a few basic guidelines that I think would apply anywhere we fish on the coast:

Don't run your big motor through wade fishermen. Use your trolling motor if you must be that close to another group.

Use established boating routes when on plane from one point to the other.

Do not wade in boating lanes if you do not want to be run over.

Stay at least 300 yards off of the King Ranch shoreline when running the big motor.

Unless invited, do not wade up on or troll-motor to another group of fishermen.

Last but not least... Don't be the guy that fishes the "bent pole" pattern. If you see guys catching fish, try not to potlick the area the first thing on the next day. It makes you look really bad, and in some cases, very unprofessional.