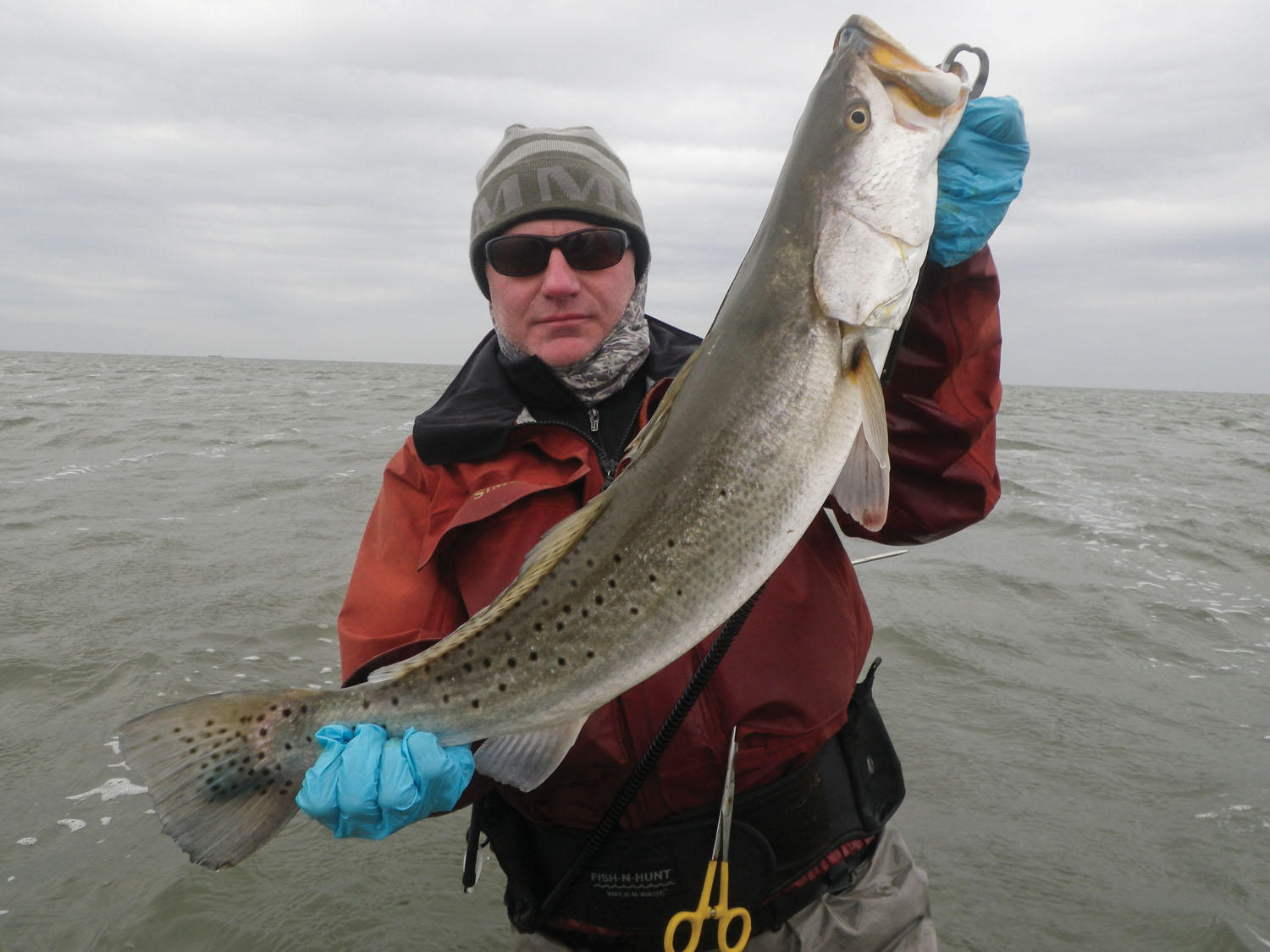 Parker Holt with a personal-best that taped past 29 inches. Bass Assassin. Released!

The spring big trout hunt of 2016 is in full swing. This is evident daily with the number of unfamiliar boats and faces showing up, trout tournaments, and social media chatter. The past few years have been more crowded than those of old and I have come to the conclusion that this is the new norm. I don't particularly like the trend, but you adapt and fish harder and smarter.

The big story this spring is awesome water quality. We have not experienced trout-green water like we are seeing now in many years. Being able to cast to specific structure targets with confidence just makes the whole fishing experience more enjoyable. Not to mention being able to instruct (or "guide") clients to make perfect casts that increase their chances at a personal best fish. Watching a client begin to understand what you are teaching them, and continuously duplicate it with success, is very rewarding to me as a guide.

Before the above statement on water quality comes back to bite me on the cheeks, there is a large manmade negative with potential to cause problems – the Army Corp of Engineers (ACE) is dredging the ICW. It started near the mouth of the Landcut and is working north. It has reached the mouth of Baffin and the waters around the Meadows and Badlands are getting ugly. South winds have the muddy plume pushing northward into the Laguna where it is hugging the King Ranch shoreline. Hopefully this stain is temporary.

Although no laughing matter, it seems funny that TPWD puts so much effort into protecting seagrass from prop-scarring and the ACE can practice open-bay dredge spoil disposal, literally wiping out acres of grass. There has to be a better method but evidently nobody is willing to fund it!

Fishing has been solid this year with trout averaging slightly heavier on fish under twenty inches than in years past. Trout between twenty and twenty-five inches have all been very solid as well. We have had numerous fish under twenty-five inches weighing over six pounds. I think this may be common on the northern coast, but not so much down here.

Another thing that alarms me, and other trophy-minded anglers I speak with regularly, is how the seven-plus-pounders seem not as prevalent as prior years. We are still catching them, and I believe this region is still the best for achieving this goal, but the numbers are just down somewhat. I have my own opinion on what is taking place, but it is not backed with any hard science, other than what I see on a daily basis with my own eyes and social media that is forwarded to me.

My take is that too many mid-class fish are being killed by recreational fishermen and guides. Those twenty to twenty-five inch fish that could be next year's trophies are just not getting the chance to hit their max potential before hitting the ice.

Baffin does not have the luxury of gulf passes to replenish the stock. What is taken out by anglers is not going to just magically reappear if the trend continues. Over the next few years I believe the five fish limit will certainly help the situation but I would like to see all anglers, especially the guides, take a more proactive stance on releasing trout over twenty inches to insure that there is a viable crop of new fish to reach trophy quality. Removing mid-class fish reminds me of the old cliche, cutting off your nose to spite your face.

Fishing patterns have been all over the place with this warm winter weather. Some days we are concentrating on mud and others we are on hard sand. It has, literally, depended on which way the wind blows. Both structures, though, have a common denominator: mullet!

If the water temperatures get to a point of staying cold (doubtful) I would be more focused on the softer bottom, but I think this is just going to be one of those seasons where you need to be checking lots of areas, often.

My charters have covered miles of Baffin and the Upper Laguna. We are catching trout (and a mix of reds) on just about every structure imaginable, and in just as many places. Outside of bad weather and extreme high barometric pressure, fishing has been solid on the catching part. The good water quality has opened up many opportunities for places to fish, and grinding on a piece of real estate that you can have to yourself.