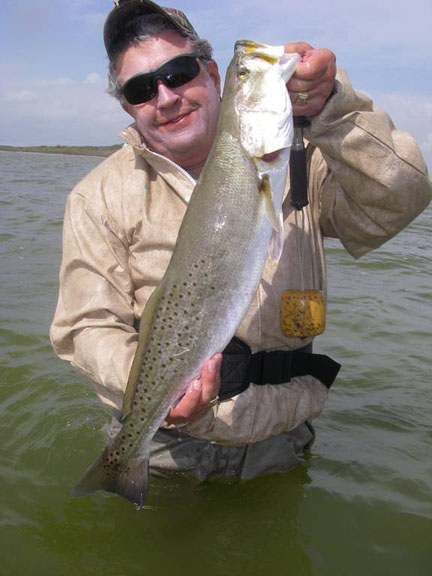 Gary Kovacs, president of the Los Cazadoes Club @ East Matagorda with a personal best of 28.5” on a Super Corky Devil. Fish was released.
We are still having some above average winds down here, but there is hope on the horizon. It's pretty funny to me and some other salts in the area that we have conditioned ourselves and our styles to play into the wind. When it stops blowing, we are left scratching our heads for our next move.

Like the fish, we have become so acclimated to it that we just make it work for us. Many days found us just being blown out a few hours into the morning. Those days are tough, and we are forever grateful when we get the big bites early. For all of the trout guys that snub redfish on a daily basis, try fishing in forty plus mph winds for trophy trout, and not appreciate the tug from the ever agreeable red mud ape. This spring has taught me to have a greater appreciation for the fat redhead.

There has been some green water moving into the Laguna Madre and Rocky Slough from both directions, i.e., Packery Channel and Port Mansfield. I am not saying this is perfect but, new signs of life are apparent. Numerous sightings of shad have been spotted on each end of these bay systems. For me, this is a tell tale sign that new water is on its way, and new life will be with it. We do not clean many fish on the charters I run, but those few that we do, the trout have been egg-laden and stuffed with shrimp and shad.

Although a slower than desired spring was dealt to us this year, there have been numerous reports of some heavyweight trout coming to the Boga Grip. Personally, I do not put much weight into reports that I am not present to witness. However, there are a few buddies and associates that I trust completely; their word on the fish they caught and released is as good as being there. Some have surpassed the ten pound mark, while numerous reports of big nine plus pounders have greeted my ears. None of this surprises me, as this is prime time to do it, and the fish only get heavier throughout the month of May.

I have relied heavily on the 5" Bass Assassin Sea Shad in our high winds. The subtle vibration that this lure puts out while bounced along the bottom has been a real key in our success. I have never been much of a paddle tail guy unless fishing for redfish, but this particular lure has just been deadly on the trout in off-colored water. The most successful color has been the Red Shad, while the Space Guppy has made a strong follow up. These types of trout lures are relatively new to my arsenal, and some trial and error has gone along with learning to be successful with them. The biggest tip, I think, that goes along with fishing this lure is utilizing a heavier jig head than we normally do in the Laguna Madre. The extra weight of an eighth or quarter ounce head versus a sixteenth ounce allows you to lift the lure hard off of the bottom to pronounce the vibration, but also allows for the lure to fall back into the strike zone promptly. This has been a key in getting the right bites when the fish are playing hard to get.

The topwater enthusiasts will be glad to know that bite is turning on, finally. It has been slow to come, but the warm waters have made them more susceptible to biting on top lately versus the past few months. I swear, I was starting to believe that the fish were becoming immune to the swish-swash, walk-the-dog movement of a topwater. Maybe some have, but the 4-5 pounders have been pretty open-minded to it.

We have been fishing all over the place in the past month, but the spoil islands have really been showing some serious signs of life lately. We have not landed any monster trout, but the quality has been there (up to 6.5lbs.). Redfish are on every island from the JFK Causeway to the Landcut, and have been very agreeable to hit any plastic tossed their way. As May closes in on us, I'll look for the spoils to light-off even more with bait and predators.

In closing I would like to say thanks to the clients that take the extra effort in handling large trout gently, and practicing catch and release. I had a recent charter with four guys on the boat, and three of them landed personal best trout, all of which were released. It truly makes me proud to be associated with sportsmen that understand the importance of releasing these genetically superior fish to produce another spawn and fight another day. My hat is off to you all.