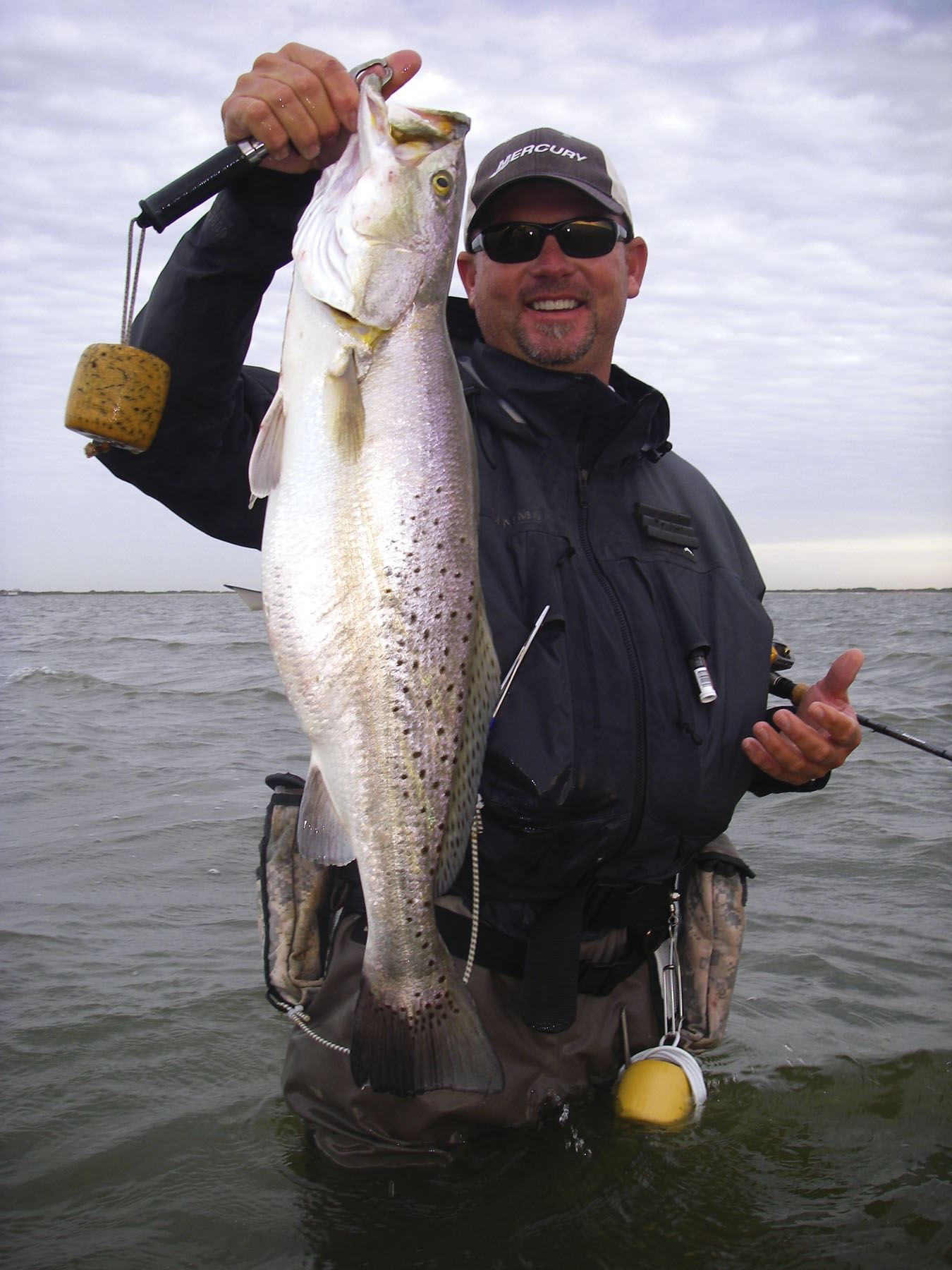 Trout caught on Bass Assassin - released.
Late March and early April lived up to their deserved reputations for large trout here on the Upper Laguna Madre and Baffin Bay. We have had some catches of large trout that rival days in the 1990s. Of course, I am speaking of quality, and not necessarily quantity. The trout will stay fat for the most part throughout this month although they will have begun spawning. We have been amazed at the girth on most of the fish we have been landing. Numerous days produced trout under twenty-six inches that weighed in excess of seven pounds. When we have been fortunate to break twenty-nine or greater length it is almost a guarantee that they will stretch the Boga Grip deep into the nine pound range and, in one case, over ten. This month of May should give us more of the same, plus the opportunity to hit more mid-range fish between twenty and twenty-five inches as our spring tides roll in.

Every spring season we look forward to the water coming in from down south. This year is filled with extra anticipation as the water quality is an unknown. The Port Mansfield area is covered up with stained water that is presumed to be brown tide. My fingers are double-crossed that clear water will miraculously make it through the Land Cut. Packery Channel will pump good quality water into the northern reaches of the Upper Laguna Madre. Depending on the prevailing southeast winds, it is hard to guess how much impact it will have on the waters closer to Baffin. I am optimistic that it will help, even if in a small way.

Many of the fishermen I spend days on the water with are under the assumption of, "Once a good spot, always a good spot." To some degree that may apply if you are tied to a short time on the water every couple of months. I understand that, but things change in the water every single year. My GPS is splattered with anchor points for certain wind directions over the years. I would say that most of them are useless now and need to be deleted from the internal memory. The rocks and hard structure seldom change, but the grass does dramatically!

The drought that we experienced did a whammy on the seagrasses from the JFK to Nine Mile Hole. The majority of areas on the east side of the Laguna had a massive grass die-off, which is now stacked up on western shorelines. Spoil Islands, Tide Gage Bar, King Ranch shoreline, and parts of the Kennedy shoreline have also been affected. Knowing that trout like to utilize shallow grassy areas during spawning; it will be interesting to figure out the areas in which we will catch them. The point in mentioning all of this is that many traditional areas look completely different than recent years, and if you are locked into fishing a certain spot, you might be surprised at what you don't find. Have confidence that the fish are still out there; you may just have to expand your search to find them.

My clients and I target large trout on most days but as the water warms up I have an increasing number that like to get a redfish at the end of the day for table fare. This spring has been a little slow for the spotted bottom grubber but that should all change this month. I expect we will start catching them on a more regular basis as we pursue the big trout. Recently the redfish action has picked up on shorelines that still have grass. Numerous recent trips have had shrimp jumping out of the grass all around us and, on those days, the reds have been showing very well and seem to be roaming more and more shallow.

Redfish and trout have been on the same plastic diet. Five inch Bass Assassins and She Dogs have been the big winners of late. The Paul Brown Original (Corky) has worked exceptionally well when the floating grass is not a nuisance. Since the sightings of shrimp became common I have been scaling down my lure sizes when up shallow. The smaller Sea Shad by Bass Assassin in the "Drunk Monkey" has been deadly (and don't think for a second that a big trout will not eat it.)

In closing, I would like to compliment Capt. Jay Watkins on his article last month. His time on the water, stance on conservation, and catch and release ethic is something we can all learn from. Regardless of what the state says you can keep, we have to be proactive as sportsmen and do our part in giving back versus just taking away.

Creeps and idiots cannot conceal themselves for long on a fishing trip. -John Gierach