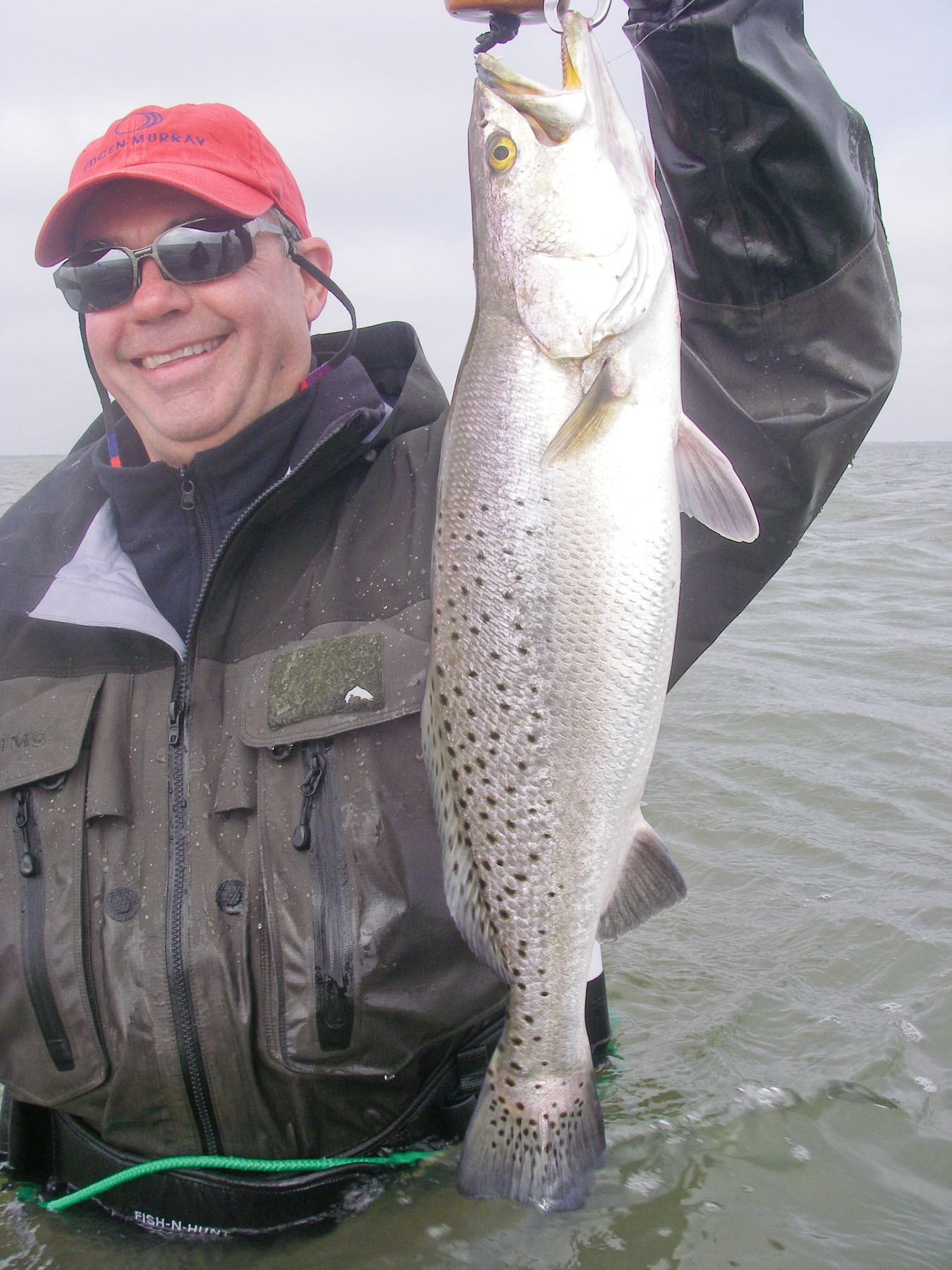 The smile says it all: Craig Kiefer with a big CPR trout, Chandeleur Isle Bass Assassin.
Hard to believe that I am writing an article for the May issue of TSFMag when I just canceled today's charter due to a late norther that blew in overnight. As I have heard many times, "If you do not like the weather in Texas, just wait ten minutes and it will change." May sound like a gripe, but I wouldn't have it any other way.

The full moon that came on March 19, (a.k.a. Super Moon - full moon at perigee, closest it has been to Earth in 27 years) brought some life to the bay system I did not expect until April. Seemingly overnight the water turned air-clear in parts of the Upper Laguna and Baffin, sargassum weed appeared in the middle of Baffin, skipjacks started smashing lures, unbelievable schools of menhaden and mullet appeared, and the football-shaped trout started making their first appearances. And to think; all of this before the bulge of the spring equinox tide. I hate to be overly optimistic as it could surely bite me in the butt, but I sure like what I am seeing and this could well be "one of those years."

The spring season has thus far has been "top shelf" for big trout. As mentioned in my last article some legitimate twelve pound trout have been landed and I just heard a rumor of a thirteen pounder, not to mention a good smattering of tens. It has been many years since this number of heavyweights have been caught in one season and it would not surprise me if Jim Wallace's record is overtaken before the end of May. Yes, I'm aware that TPWD recognizes a trout caught and released by Bud Roland in the Lower Laguna as the state record but with no official weight some of us have a hard time accepting it.

With so many areas looking primed for big trout, it is sometimes hard for me to decide where to go first. This is a good problem to have and one that myself and most other guides usually do not have to deal with. Trout are dropping eggs on a regular basis now so my first thought is of areas that hold a lot of grass. Unlike bass, trout do not build nests and do not hang around to protect their spawn once released. What they do is slip into areas where thick grass is prevalent, waters are shallow and warm, and then release their roe for the male trout to fertilize. Catching the grunting, undersized male trout is actually a good indicator that larger females are around.
The south shoreline of Baffin, amongst the rocks and shoreline of Rocky Slough, the flats of Yarbrough, and the spoil islands of the Laguna (Nighthawk), are ideal spawning areas that will hold all of the structure and water depths to attract the big females. Mix these areas with a stable bait supply and we should be on our way to some good fishing, and big catching.

I was fishing the Rockport Bash one year in May and my partner and I had the lead on Day 1 with three fish that weighed 18.5#. We were excited for the second day to hopefully get a big check. Long story short, the fish would not bite for us on Day 2 and we zeroed! I could literally sight-cast those big girls but they would eat nothing. Frustrated after the tourney, I spoke with my good friend, Capt. Jay Watkins, and told him of what we had gone through. Jay said, (as only he could), "Now, RowseyWhat is the most fickle, moody, and temperamental thing on the face of planet?" Me: "I give up. What is it, Jay?" Jay: "I'll tell ya Rowsey... It is a pregnant woman at 8.5 months and that is what you are trying to catch." As soon as he said it, I knew he was right.

Now to the point of the story, we have to approach these big trout with caution, be subtle in our approach, and selective in our lure choices. A big intrusive plug is not always the best approach to catching these big girls in shallow water. A floater Corky by MirrOlure, a small swim shad by Bass Assassin on a 1/16 ounce jig, or maybe a weedless-rigged 5" Bass Assassin, will top my list for coaxing these temperamental females.

"Fishing is like sex, everyone thinks there is more than there is, and everyone else is getting more than their share." -Henry Kanemoto