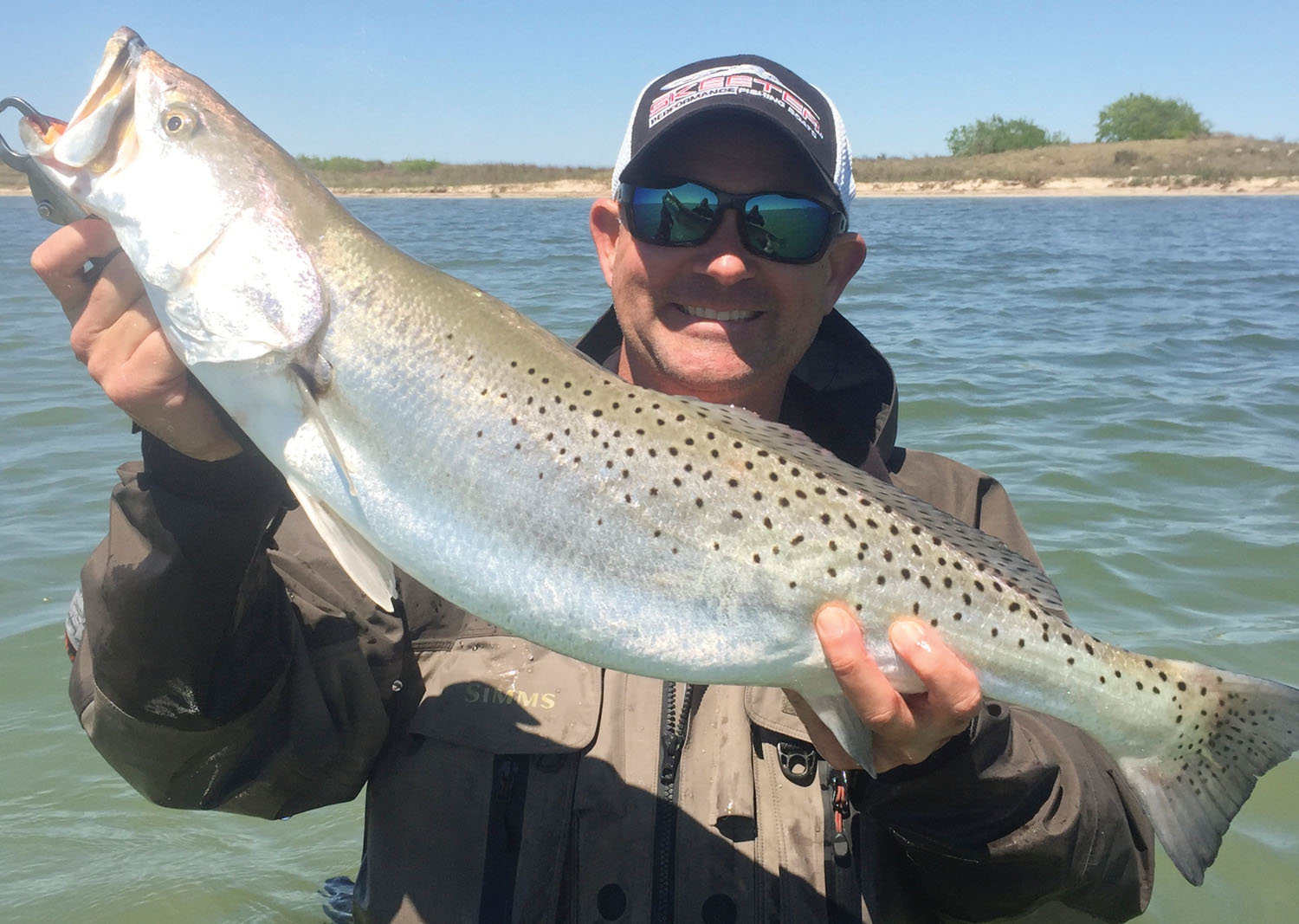 Patrick Martino of Biloxi, Mississippi was rewarded with a great eight-and-a-half pounder after a long road trip to fish Baffin. CPR!

Hard to believe I am writing for the May issue of TSFMag when I just canceled today's charter for a late norther that blew in overnight. As we've all heard it said many times, "If you don't like the weather in Texas, just wait ten minutes and it will change." No worries on this end, it just makes life on the water a little more interesting.

By the time this article hits the newsstand we will be out of our Simms waders and back to wading wet. Hard to believe it has gotten here so fast, but such is the life on the Laguna Madre. Early-April started bringing us a bit of new water from the gulf. Overnight, we started catching skipjacks alongside our trout bite, and giant schools of cownose rays have invaded the bay. The rays are not much for sport but standing on the bow of the boat and watching these stealthy creatures glide by in crystal clear water by the hundreds is mesmerizing to even the saltiest of anglers. They are just one of the first clues of what is to come via the gulf.

The baitfish and gamefish that ride spring's tides back into the bay is what makes May one the best fishing months of the year here in the Upper Laguna and Baffin Bay. Along with great numbers for catching entertainment, we will be catching some super-fat trout that are still egg-laden. In fact, if you are a participant in the CCA STAR tournament, Memorial Day weekend is a great time to catch the tournament winner south of the JFK Causeway. As the days tick away into June many of the big girls will likely have lost considerable weight due to heavier spawning.

Between the gulf trout that have now invaded the bay and schools of roaming redfish, it's hard not to walk around with a smile on your face over all of the awesome prospects that the Mother Lagoon and Baffin have to offer. With so many areas looking primed for big trout, it is sometimes hard for me to decide where to begin a day on the water. This is a good problem to have, and one that I and most other guides usually do not have opportunity to deal with.

With early-spawning underway, my first thought is of areas that hold a lot of grass. Unlike bass, trout do not prepare spawning beds nor do they hang around to protect their eggs or nurture their fry. Instead- they slip into areas where grass is prevalent, the water shallow and warm, and release their roe for the male trout to fertilize. Accomplishing this they move on. Catching the grunting, undersized male trout is actually a good indicator that larger females are around.

The south shoreline of Baffin, amongst the rocks and shoreline of Rocky Slough, the flats of Yarbrough, and the spoil islands of the Laguna (Nighthawk) are ideal spawning areas that will hold all of the necessary structure and water depths to attract the big females as they stage to spawn. Mix these areas with a stable bait supply and we should all be on our way to some good fishing and big catching.

I was fishing the Rockport Bash one year in May, my partner and I had the lead on Day-1 with a three-fish bag that weighed 18.5 pounds. We were excited for the second day to hopefully get a big check. Long story short, the fish would not bite for us on Day-2 and we zeroed! I could literally sight-cast those big girls but they would eat nothing.

Frustrated, I spoke with good friend, Capt. Jay Watkins, after the tourney, relating what we'd been through. Jay remarked (in a way that only Jay could say it), "Now, Rowsey; what is the most fickle, moody, and temperamental thing on the face of the planet?"

I knew instantly that he was right and the point of the story is this, we have to approach these big trout with caution, very subtle in our approach, and selective in our lure choices. A big intrusive plug is not always the best lure for catching these big girls in shallow water. A floating Corky by MirrOlure, a small swim shad by Bass Assassin on a 1/16 jighead, and a weedless-rigged 5" Assassin will be at the top of my list for coaxing these temperamental females into biting.