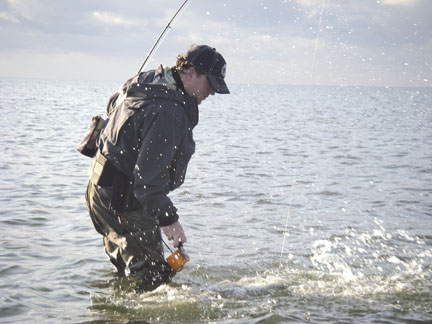 November can be explosive…and rewarding!
So much has changed over the past thirty days that I'm not sure where to begin. Late September and October has dropped fall right onto our laps. After a very long drought we have finally received substantial rainfall here in the Coastal Bend. All the new water has made for some really high tides which in turn made fishing a little tough, but I am not complaining as we were deep into the emergency stages of the prolonged drought. The runoff has stained the water but in the long run it will pay great dividends for the winter trout season.

As mentioned in the October issue, bait migrations began and we saw lots of action via the redfish. Trout proved to be a little on the slow side for October, but we had a number of good scores on larger trout while fishing in schools of redfish. As the fronts continue to drop water temperatures throughout November, we will be swinging for the fence in our efforts to pin down the trophy trout that the Laguna and Baffin are famous for and, what I prefer to target. When water temperatures stabilize in the high-50s to low-60s the fishing should just explode around here for large trout. Historically, this usually takes place in mid to late November. We were blessed with great water quality throughout the summer, and I am not looking for that to change in the winter.

November is the true beginning of everything trophy trout enthusiasts look forward to. By now we have had numerous cool fronts, and predators are in full swing gorging themselves. The trout will really start putting on some girth during this time period, which will greatly improve your odds of landing that "Holy Grail" double-digit trout of a lifetime.

Being that we are not yet in the harshest part of winter, the trout will not be as centralized, as say January. They will still be located on all types of structure from rocks to potholes and some mud. My logs of many years show that any one of these can be as productive as any other, just depending on bait supply, wind, water temperatures, and overall conditions. This is a great time of year to explore new things and not get in that mode of being a "spot" fishermen. You will be amazed at what you can find by just doing something a little outside of the box or your comfort zone.

Lure choices will not change much but the Corky, now owned by Mirrolure, will be getting a lot more play time from me. As many of you know, I am a long time Corky fan. This addiction is not based on cult-like following but simply on the lure's ability to fool big trout into biting for me. Right next to the Corky will be the 5" Bass Assassin. My top Assassin color picks for wintertime use will be: Plum (solid), Chandelier Isle, Bone Diamond, Morning Glory, Pink Diamond, and Calcasieu Brew. As a general rule we will use the darkest and brightest shades in off-colored water and the toned-down colors in the clear to milky green. An array of topwaters will see action in favorable conditions but, I swear, I think the fish are onto us and that "clank-clank-womp" they continuously hear over their heads. In short, if you are getting blowups and no hookups, go subsurface with a Bass Assassin or Corky.

In closing, I would like to send Mr. and Mrs. Paul Brown a big congratulation on the sale of their awesome lure, the Corky. I know there is a lot of a mixed emotion out there among longtime fans but I think they have found a perfect match with Mirrolure. I spoke with the Browns at length right after the news was made public and they were truly excited about the transition. They sound very comfortable with their new partner. Mr. Brown told me, "David, the truth is that with Mirrolure's technology the Corky will better than ever." That was music to my ears but I will admit that not being able to call Mr. Brown on the phone and request thirty baits in a custom color will be a little hard to get used to. Regardless, the Browns deserve a break from all of us demanding fanatics and I am truly happy for them.

"Someone just back of you while you are fishing is as bad as someone looking over your shoulder while you write a letter to your girl." - Ernest Hemingway