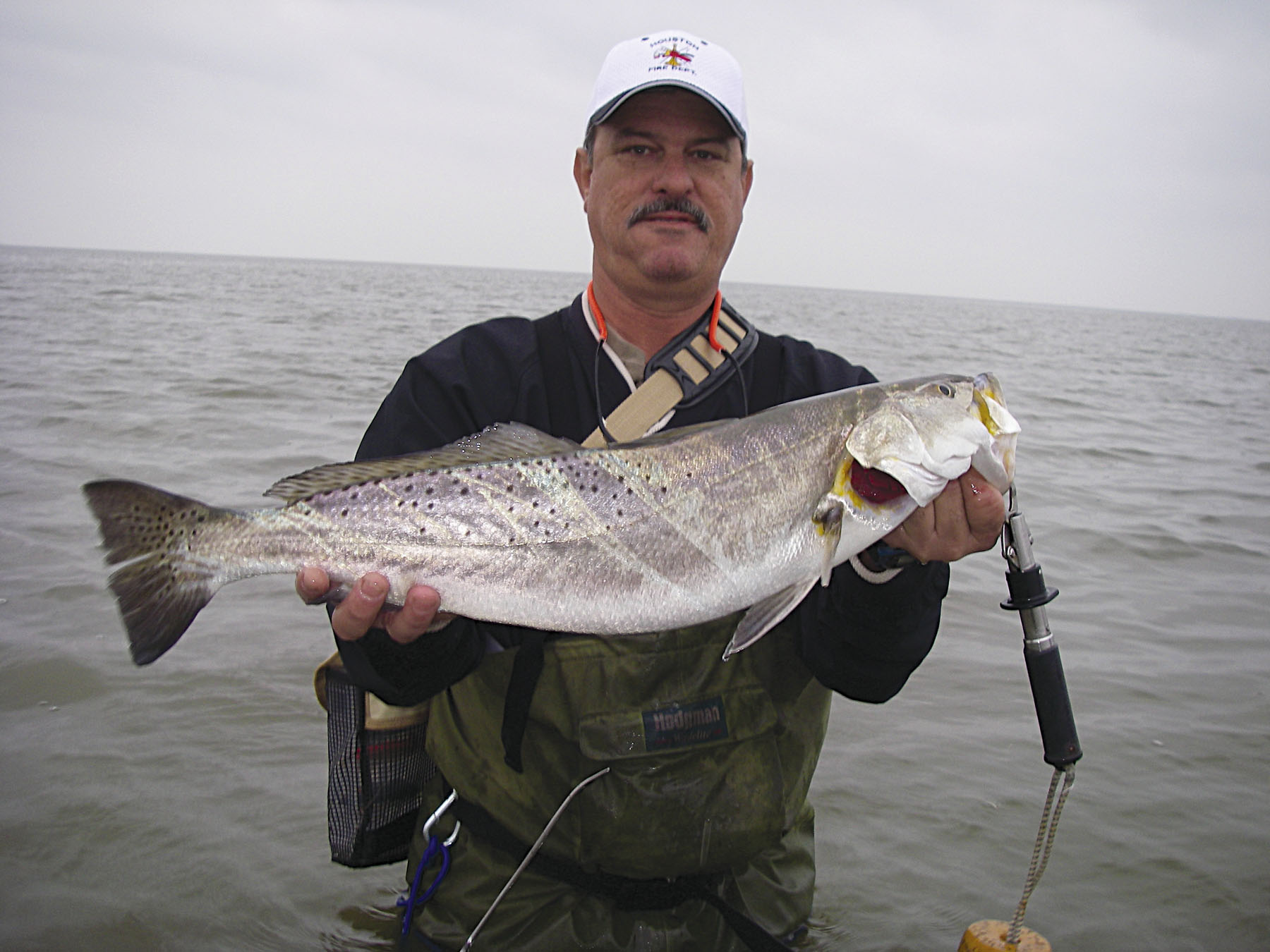 Looking forward to many days of quality fish in November and beyond.
Is November already here? After an unseasonably warm summer, I was not sure if we would ever get any relief from the scorching sun, and water that seemed to almost boil on the flats. Late September and early October have finally brought some relief, and most days are starting with air temperatures in the mid 60's and water temperatures in the 70's. It is actually cool enough that a wade jacket is required on predawn boat rides to Baffin.

All summer long I have been singing the praises of great water clarity, abundant grassbeds, and good catches of trout and redfish. The diversion of flood water from the Rio Grande that inundated the Lower Laguna Madre finally made its way into the Land Cut, and headed north towards Baffin. Numerous tropical storms that came in south of Corpus Christi dropped record amounts of rainwater on us, pushed up the tide levels, and has, generally, lowered our water visibility to about one foot. With a little luck, some hard falling tides and north winds will get everything back in check before we know it, and just in time for the kickoff of trophy trout season.

By now most of you guys and gals have heard of a fish kill that took place in the west end of Baffin. The general consensus is that depleted oxygen levels (DOL) was the culprit. Every year we deal with DOL to some extent, but something was different this year than years past. The amount of dead fish that washed up appeared to be far greater than most of us have ever seen, excluding freeze years. Ironically, it came right after tropical storm Hermine passed and dumped major amounts of water on inland farm lands that eventually ran into the bay. A growing number of anglers and conservation minded folks are wondering if there is a relationship between agriculture runoff, fish kills, and years when brown tide raises its ugly head. The closest thing I have to a test tube is a Super Spook and a wine bottle cork, so I'll leave that one for the scientist to decide, but does need to be looked at in great detail.

Soon after the kill was made very public on the internet forums, I had to go take a look for myself on the west end. All species seemed to have been affected, from the bottom to the top of the food chain, and, yes, it was sad to see some trout in the 27 to 30-inch class trout washed up on the beach. I am, by no means, making light of the situation, but the bottom line, from what I observed, is that the kill was no worse than what you would see at the cleaning tables during the peak of finfish season on a typical Friday and Saturday at any marina attached to the Laguna or Baffin. So to all that were shocked to see the carnage washed ashore, I would have to ask How do you feel about boat after boat dropping 100+ pounds of mature spawners onto the cleaning table? Between Mother Nature and the need for some to thump their own chests, it is way past time to start fishing these bays with a more conservative mindset.

There are still lots of big trout around, and when the water temps drop this month, they will go from skinny to fat in what will seem like overnight. Some large trout will start gathering in areas where deep and shallow water come together. The King Ranch Shoreline, all of the north shoreline of Baffin and spoil islands will be high on the list to investigate. Since the vast majority of bait has made its migration, any little sign of something for the trout to eat may be all it takes to get the right bite going. All of the pristine water conditions throughout the summer carpeted the bay floor with new grass growth. Locating the areas that have a mix of sand holes in the grass, a nearby dropoff, and any small guts that lead into and out of the feeding areas will be key in casting versus catching. There are literally hundreds of areas that offer this scenario, so get out of the boat and pay attention to the water depth as you zigzag through a wade.

Top lure choices for me will be a 5" Bass Assassin to locate the fish. The Paul Brown Original (Corky) to try and tease the largest out of the crowd (not to say that the Bass Assassin will not do that as well). Given the right conditions, a wide array of topwater lures will be mixed in for good measure.