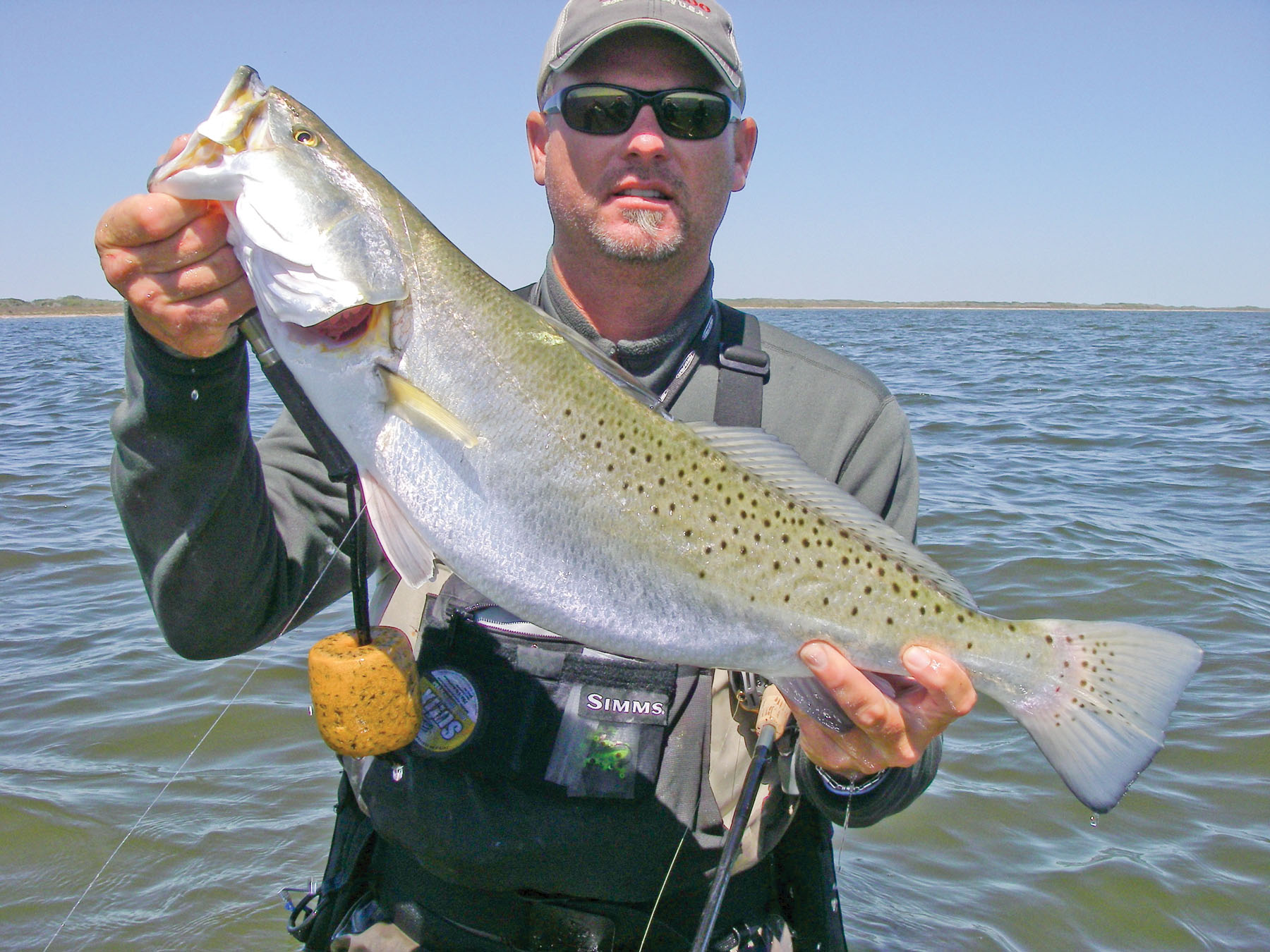 Trout are already showing signs of gorging in preparation for cooler days ahead.

I'm off the water today and decided to take my coffee outside. At a chilly 65 it was almost too cool for the boxers and flip flops, but before I retreated back in for some pants I couldn't help to get a grin on my face from the thoughts of what is just around the corner.

November is a special time for Texas outdoorsman. Whether you are hunting big trout, quail, or deer; this is the month you have been anticipating since early summer. In South Texas this is the beginning of big trout season. November can start out gangbusters for large specks or just slowly give way to December.

One major factor will dictate if we are in full-on winter mode or still transitioning into it. Cold fronts and sustained water temperatures in 60 range is where it is at. The 2011-2012 winter season was a warm one, and we constantly found ourselves yearning for cooler weather that would drop the water temp to the levels that would nudge the trout to seek out areas of warmth. Well, it did not happen until early spring, and even that was borderline. Higher than average water temperatures kept the trout spread out and roaming in large areas. Yes, they were there, but it took lots of casting to produce an awesome day. Long-term predictions, by various weather sources, points to a cooler winter than last year and, personally, I am ready to test out some new SIMMS gear to deal with it.

Every passing front is going to put the trout into a feed mode that resembles a scene out of the movie Animal House. In their anticipation of cold days, and dwindling food sources, trout will absolutely gorge themselves to put on winter flesh that will take them into spring. If you are one the lucky few who happens to be on the water during this time you will have the chance to make an unrivaled outdoor memory that will last for a lifetime. I will be there, and I hope you are along for the ride.

Typically, November is not cool enough to push the trout straight to the muddy-bottom pattern, but they will be staging close to their favorite winter haunts. My focus this month will be on transition areas that allow for deepwater access to shallow night feeding areas. Small guts and swags that feed onto the flats from deeper water will be the rule of thumb for me. These areas are found throughout Baffin and the Upper Laguna Madre, and they serve as highways for large trout to take advantage of unsuspecting baitfish. The trout will be on an array of bottom contours during November, i.e., a hard-sandy area can be as productive as one that leads through a softer bottom. The point of saying this is that depending on water temperatures, large trout will be found in many different areas, and there is no need to be fishing shoulder to shoulder on community holes. Do some exploring, find the baitfish, stay away from other boats, and catch some big trout that's what I'll be doing.

At the risk of sounding like a broken record, my number one tool for pinpointing big trout remains to be the 5" Bass Assassin. Cold water, hot water, shallow, deep, windy or calm, this lure is a rock-star in my arsenal. There are so many plastic lures on the market that it is mind boggling to keep up with them all. My clients constantly quiz me, "What about this lure? What about that lure? This one tears too easily. This brand is tougher." The bottom line here is that the Bass Assassin catches lots of fish and big fish. As far as softness, that is exactly what makes it so damn good. My question is this, "If you are going to spend a bunch of money on everything that goes along with fishing, why would you be so cheap on the very thing that tricks the fish into biting?" I once heard it called, "Stepping over a dollar to pick up a penny."

Of course, there are a number of other quality lures that I rely on once we find them. The "Corky" (Paul Brown Original Series by MirrOlure) is a standout favorite for wintertime fishing and one that I rely on heavily from now on through June (I actually use it year round). The legend and cult-like following of this lure needs no introduction, so if you fish the salt in Texas and have not made it a part of your wader box, you may want to pick up another sport.

Thanks to so many of y'all who have been early booking. The trout and I appreciate it. Looking forward to hearing from the rest of you.