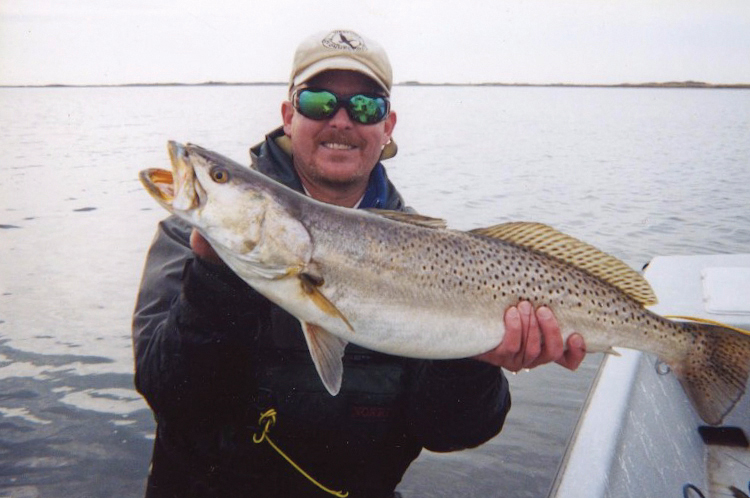 Dr. Mike Miller with a 10-pound fish caught on a topwater during that epic Thanksgiving run.

Another long and hot summer has passed and autumn has finally blessed the Texas coast with its presence. Cool mornings are like an IV of adrenaline for me. After many sessions of overheated days, finicky fish and super-high tides, I am elated to be at the start of the season where big trout patterns will soon begin to evolve.

As passionate as I am about keeping my feet wet and line stretched, the last two months did allow me some time to partake in other much beloved activities; bird hunting, time with friends on a hill country river, cooking on the smoker, fall gardening, etc. Everyone has their own way of hitting the "refresh button" and those are just a few of mine. Short of a big quail hunt this month, a bow hunt in December, and working as a guide for a hunt with Combat Marine Outdoors, I'm back into total fish focus with a new set of batteries.

When you think of catching monster trout in Baffin and the Upper Laguna, November is not the month on the tip of everyone's tongue. However, I have been slinging different forms of plastic through the air for many years down here and I can tell you that November can be a sleeper month for getting into a bunch of rogue trout.

A few years ago I was back home in the hill country spending the Thanksgiving weekend with my family. On that same afternoon my phone started blowing up. By the next day the stories and photos were making their way to me. "Where are you? I can't believe you are not on the water. Big trout are crushing topwaters and Corkys!"

I finally had all I could stand and begged my mother's forgiveness as I loaded my truck to head back to Flour Bluff. As quickly as I could get the turkey leftovers on the boat I headed south to Baffin for what would be an early evening fishing trip that would require coming home in the dark (not unusual). As I made my way into the bay the first thing I noticed was that there were no boats anywhere. I thought my friends had played a nasty joke or punked me. Oh well, I drove past four good fishing areas for the conditions, just sizing up the bait activity at each one.

Cruising up to the fifth spot, I realized I should not have run past the first areas of interest and turned the boat around to head back. As I set the anchor and got ready to jump out of the boat, I heard a crash on the surface. About 100 yards away I could see the aftermath of the kill shot and watched as other mullet tried to remove themselves from the buffet line.

With a full-size Spook of speckled trout pattern, I headed for the action. I covered the distance in about four long casts as I was walking, and the fifth cast was money that resulted in a takedown of the Spook I will never forget.

I'm not talking hollow slurping, this strike came viciously from the bottom up. That trout hit the lure, racing from the depths, and never slowed down. She flew like a missile through the air, seven to eight feet, with the plug hanging from her face. The fight was good and I eventually prevailed to put her on the Boga Grip and weigh her at 9.5 pounds. Not a bad start! I fished on into the dark and eventually made my way back to the dock around midnight. The final tally was 2 over 9, 3 over 8, 2 over 7, and 4 over 6 pounds. Never discount November!

In my opinion, the key to having a good winter start, like the one I just shared, is all about the weather. That November had been a cold one, and the high fall tides had dropped out. The conditions were more reflective of December than November. It really doesn't matter to the trout what month it is; when the water temperatures stabilize in the 50's-60's, the trout are going to shift into kill mode and start eating as much as they can. We just have to put in our time and make ourselves present when the opportunities arise. I will be there.

My charter books are open for the winter and spring season. If you are thinking you want to have a chance at one of these epic episodes, contact me sooner than later to reserve your days.