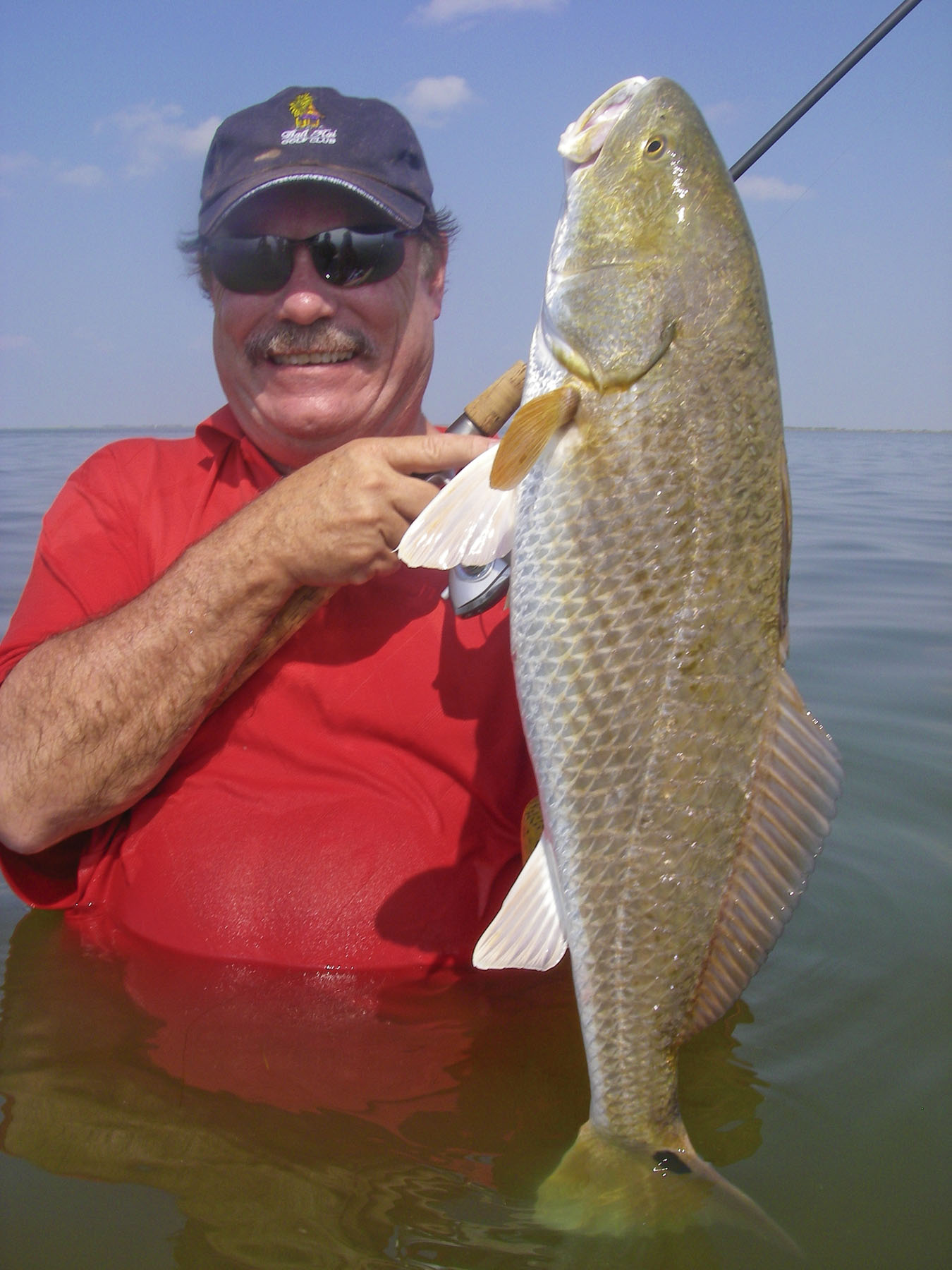 Don Haynes of Alamo Toyota in San Antonio with one of many upper slot reds caught on Bass Assassin Sea Shad.
A few northern winds have begun to blow in and although not cool yet, the hair on the back of my neck is already standing up in anticipation of cooler water temperatures, fall tides, birds working, and bait migrations. I know most of you guys and gals are shifting into deer hunting mode just now, but I and a few other diehards will be focused on the "other" big game animal of Texas giant speckled trout. In my opinion, the sportiest trophy the state has to offer.

October being the transition month that it is, sometimes it gives us bounteous catches, and some days not. Paying close attention to approaching fronts and atmospheric pressure changes are keys to success in this area at this time of year. The prefrontal days are, hands down, my favorite to be on the water. The day or two following a front would be my least favorite but, having said that, recovery from frontal passage occurs much quicker in fall than in winter and early spring.

The bait will really be on the move in October, utilizing any natural and manmade passes available. The ICW is a major corridor for migrations in our waters. Along the ICW are many spoil islands, guts leading from the flats, scattered rocks, drop offs, and sand bars that the trout and reds will be using them all as ambush spots to tag this mobile buffet.

Although I am not much of a bird fisherman, October birds will get my attention, especially around the full or new moon. Gulls and pelicans are my trusted birds this time of year. Working gulls will usually get you in the neighborhood of moving trout, while I trust the pelicans more for the redfish schools that are still making their way to the Gulf.

The water clarity continues to be "air clear" in the Upper Laguna. It is pretty to look at but makes sneaking up on fish really tough. Good eyesight, polarized glasses, and long accurate casts are essential. With the combination of clear water and record numbers of boats on the water, the schooling reds have been spooky but there are some giant schools out there that will provide world-class rod bending when you find them. If the wind happens to be cranking, do not let it keep you from going in search of these big reds; i.e. the cloudier the water the better your chance of not spooking them and getting multiple shots at these bruisers.

The majority of trout will remain to be up skinny in the mornings for quick feeds as long as it stays warm. After the sun has been up for a while you would be well advised to head out to four and six foot depths for continued action. It is hard on wade fishermen like myself and clients, but sometimes you are just going to have to bite the bullet and fish out of the boat. That is not as bad as it seems if you are equipped with a Power Pole and a trolling motor. My fingers are crossed that we will have some late September and early October fronts that will start dropping the water temperatures back into the 70s and we can stay saturated all day in waist deep water with our knees banging off of crusty rock piles. We'll just have to wait and see.

Other than at first light, the topwater bite has been less than desired. I am hopeful that October's cooler waters will prolong that action some; or a bunch. My mainstay continues to be the 5" Bass Assassin on 1/16 ounce screwlock jigs when wading, and 1/8 to 1/4 ounce when fishing from the boat. I have also been using the 1/8 ounce Pro Elite Series by Bass Assassin when wading. This new hook comes in many colors, and is of stout build. I have become a big fan of it. Most all of you know that I am a big Corky (Paul Brown Original by MirrOlure) fan, and if you don't, I am telling you now. I just received a sampling of the new colors that they will be introducing very soon. I am not going to let the cat out of the bag but they are killer!

With big trout season just around the corner, this is the time to plan ahead and you're your dates for prime season. Many of you already have, and I am very grateful for your continued support and confidence.

"The science of fishing can be had from books; the art is learned by the catching and losing of fish." W. H. Blake Brown Waters