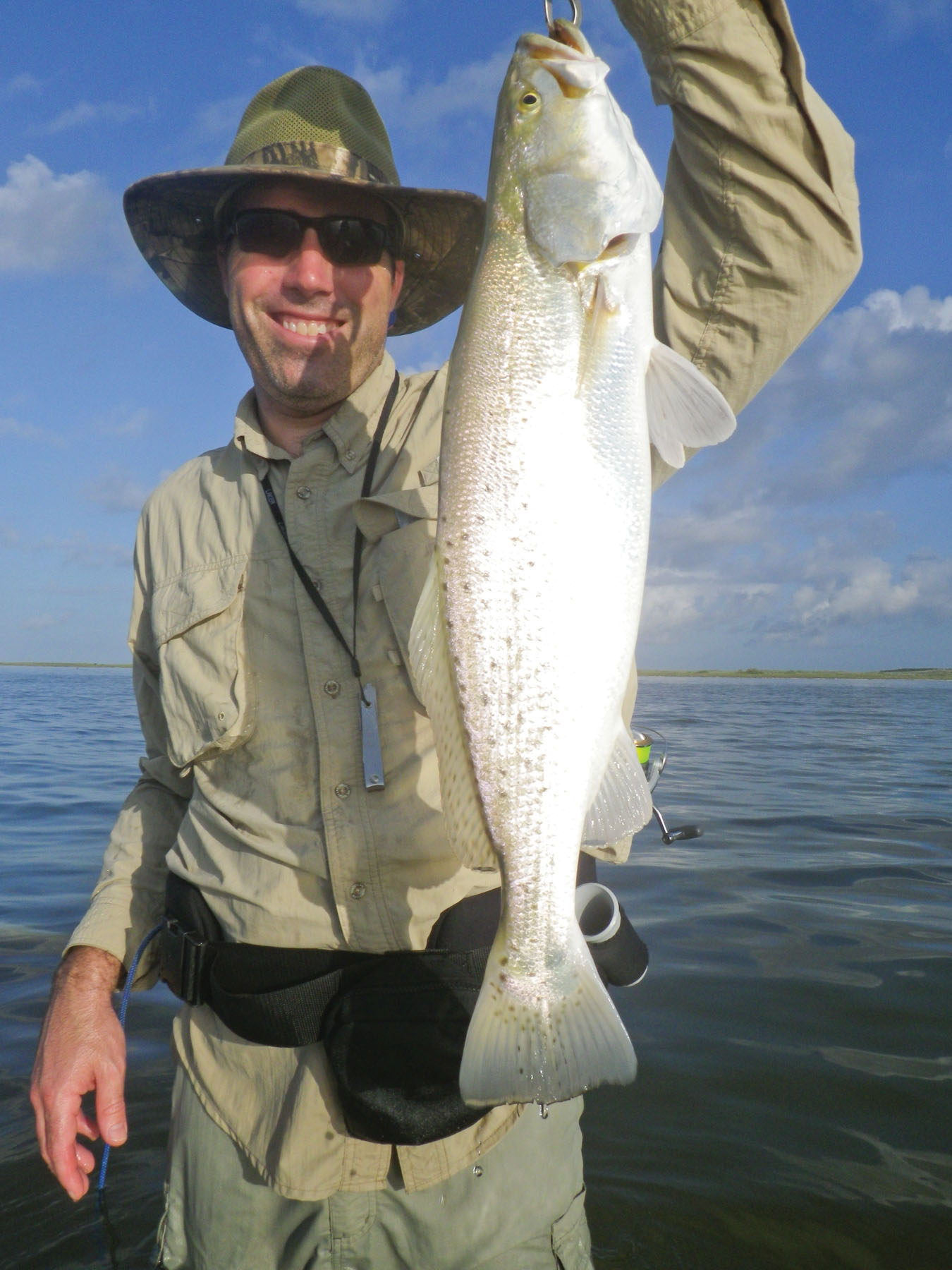 With August gone and September fading; I will soon have my slowest months of artificial only guide work behind me. Most of my honey-do work is also behind me. The fall garden is planted and anticipation is high for another winter and spring season of catching large trout. Thus far 2012 has proved to be a warm one down here in the coastal bend and although we caught some big fish, I cannot ever remember working so hard for them. My hopes are high that 2013 will be cooler and things will get back to what I consider normal. If some of the trout we caught in August and September are any indication; Id say the future looks good. My clients and I had an amazing run on some hot summer trout that broke over the nine pound range. Those fish will be massive come December and January.

October is the beginning of all things good in my life. Cooler weather teases us every few days, duck and quail season are just around the corner, and large trout begin feeding aggressively. But before they start locking lips with large mullet, we have a window of opportunity to get ready for them. Kind of like when a hurricane is threatening - I use October as winter-preparedness month.

What I mean is that I get all my ducks in a row now; reels cleaned and super-tuned, zippers lubed on equipment that gets douched in the salt, reels spooled with new braid, a huge lure inventory to sort through and reorder what may be needed, plugs re-hooked, lube on trailer hubs, etc. There are just a ton of things that I like to take care of to prevent issues when I'm on the water with the greatest fishing clients ever. My family and I are very grateful for their continued support and friendships, and I think being organized and prepared for their day to fish is just a small way of saying, "Thank You."

As ducks migrate south, the baitfish and reds migrate north around here, and the flounder will be right behind them. October will display all kinds of activity that demonstrates the cycle of life for our salty friends. I'm not big on fishing the birds but this is one time that I will give it consideration as it can really mean something during this exodus of fish headed to the gulf. Unlike some bays farther north, I have just never found bird fishing in general to give up more than dinks and gafftops. October and November are different though. You can actually catch some quality trout and enough oversized reds to make some heavy photos. Birds are easy to spot and an easy pattern to figure out but, for those of us who prefer to be wet while casting we just need know how to get in their way as they travel through.

The first time I ever saw my name in print, Capt. Mike McBride wrote an article for TIDE Magazine and described me by saying, "Rowsey is a master at hiding in plain sight." Mike and I had fished together enough, with great success I might add, mostly in unconventional spots that boats just pass by on the way to Baffin. The reason I mention this is because this is time of year when I fish these highly visible areas. One the most productive being the edge of the Intracoastal Waterway (ICW).

The ICW is a fish highway with no parallel in this area. Although you can catch fish on it year round, October makes for great wading that produces stout trout, many in the trophy class. There are lots of little cuts that intersect the ICW, depressions from barges getting off course, and tons of grass lines and edges that hold fish.

If you are into topwater action, try it one morning in October you can thank me later. If you want something a little more conventional to throw a plug at, the spoil islands from the mouth of Baffin to the JFK Causeway would be next on my list. The islands do not funnel fish as well as the ICW, so make sure you have good bait activity before you start casting wildly into the abyss.

I forgot to mention in the September issue that I have opened the books for my winter and spring dates. Please do not delay in booking if you are serious about trophy trout fishing. I'm looking forward to seeing my regular crew and meeting my next best client. After deer season might be too late.