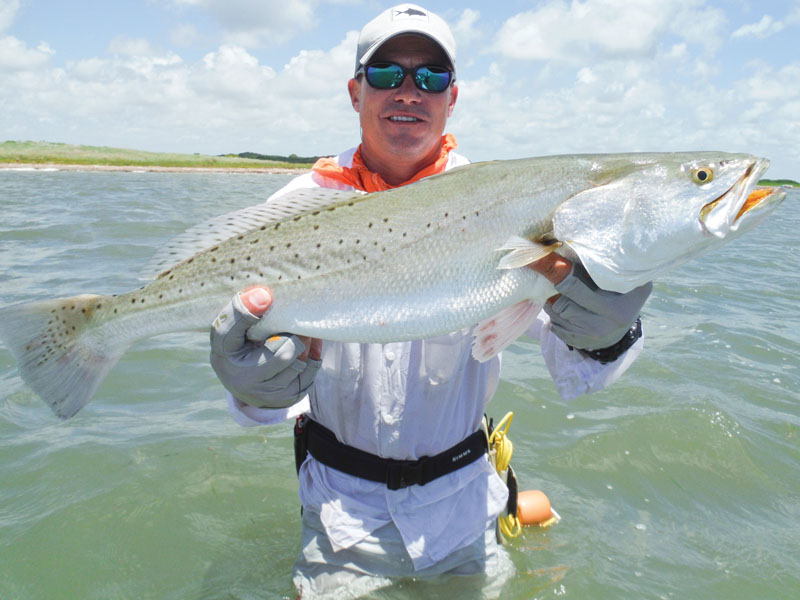 Brian Thompson proving that big trout love to hang out in schools of redfish. MirrOlure She Dog and Bass Assassins did the trick. CPR!

Hard to imagine that October is upon us; 2015 is passing like no year in memory. I was always told growing up that time flies as you get older. I guess the old men who said it were right about that, too. Seems just yesterday we were bundled against February's chill, casting to potholes, with midday air temps running low-50s.

Fall is definitely approaching but as I write this report the temperature outside is no indication the seasons are about to change. We are dealing daily with summer's swelter but managing to fish through it. My best advice for trout success at present would definitely be to get out early – well before sunrise if possible. Our "good" bite usually retires about 9:00 a.m. and the rest of the day is spent fishing primo structure for that one monster bite. It happens with good enough regularity but it takes a serious mindset to accomplish.

I think most lure guides would back me up on this... The vast majority of clients do not have the kind of focus it takes to continue grinding when the bite slows down.

They come for action and most would rather go chase reds or just have fun with whatever bites they can get. I'm not knocking them; it's their day and I really do get that, but the largest trout make up probably less than 1% of the total population and if catching one is your goal it requires some hard work during these warm months.

October's early northers will bring the first truly cool temperatures. Every little cool snap is part of the recipe to get the large trout thinking about winter and putting as much protein in their bellies as possible. It will start slow but by the end of the month all cylinders should be firing in preparation for a big takeoff.

Major bait migrations have been taking place and areas yet holding the largest schools of bait will be our primary focus for all game fish in October. I am not a "bird fisherman" per se but, flocks of clamoring gulls do pique my interest more in the month of October than any other time of the year. I know you guys farther up the coast have great success with the bird pattern but, normally, our action under them is never grand. October is the month where that can all change and I will take the time to investigate them when I see them.

In many cases the best action under birds is along the ICW where the bait is using the channel as a migration route to escape to the gulf. Many days, birds will be strung out for a mile or greater. I love to anchor the boat on the west side of the ditch and make long wades down the edge, fishing the ICW itself, and all of the potholes and grass fingers I encounter on the adjacent flat. I think most folks would be amazed at how many big trout and reds we catch doing this.

So as I am sliding through this transition period between the seasons, I will be in full preparation for the "big" fishing season soon to come. A new Haynie 24HO and 250 Pro XS Mercury was just parked at the house and is ready to roll out. I go through a long checklist of things to get prepared for the late-fall and winter season, i.e., Waterloo rods, Quantum reels in perfect working order, new Simms waders and technical gear are inspected carefully and leak-tested. Bass Assassins and MirrOlures are organized and re-hooked as needed, a pair of new Maui Jim's for the season, etc. Having everything together and where it needs to be is a big deal to me. I take a lot of pride in not only putting my clients on big trout but also making sure that they are comfortable, safe, and have everything they need to experience a great day on the water. We rely on each other to be successful, on the water and also in life.

We just completed our first year of the 5-fish trout limit. It will be interesting to see how the first year plays out. I'm optimistic, but think the real results will be more evident in years two and three. Regardless, I believe it will be great for the fishery. My only complaint about the 5-fish limit is that it did not take place ten years ago. As the old saying goes, "The best time to plant a tree was twenty years ago."