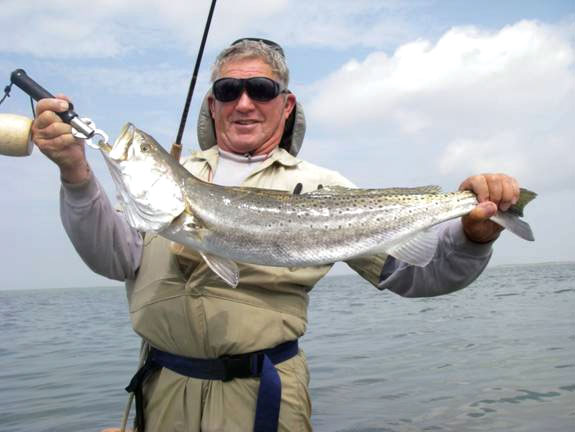 Stubbornness and a mid-day topwater pays off for plugging legend, Maurice Estlinbaum. Baffin – 31 inches - released!
I have a sign hanging in my garage that says, "I love to watch the seasons change...from hunting to fishing." A simple quote, but one that I know rings true with most Texas outdoorsmen come September. It has been a long, hot, dry summer down here on the Laguna Madre and amidst the jagged rocks of Baffin Bay. To say that I am looking forward to a dove hunt would be a bit of an understatement. Plugging for trout will always be my first love in the outdoors, but the first crack of the 20 gauge, and watching a dove fly off safely (in my case) signifies that cooler days are just around the corner.

On a scale of one to ten, I would rate Summer 2009 at about a six. The fishing itself was better than a six, but considering the drought, heat, and boat pressure, the overall rating suffered a bit. The big positives for the summer were great water clarity, quality trout, and awesome clients that had the fortitude to grind them out on a daily basis.

This summer seemed to have brought record numbers of boats to the bay system. Many were tournament based; some were guides from up north. Since the silting in of Cedar Bayou, the fishing in the Rockport area is approaching all-time lows for that once productive fishery, according to Capt. Jay Watkins. The lack of quality fishing up north has forced many Rockport-based guides to spend their days further south, i.e., Laguna Madre and Baffin. Finding productive areas to make a long wade with some solitude proved to be a bit challenging even during mid-week stretches. I'm not knocking the guides for being down here; they are taking whatever measures they can to put their clients on a memorable day. However, the trickle down of Cedar Bayou being closed puts more pressure on the Laguna Madre and Baffin. Considering the millions of dollars the coastal fishing industry produces for the state, one can not help but wonder why this historic pass has not been reopened.

Our days start very early around here. Regardless of the moon and tide, heat is our biggest factor when catching trout right now. The bite is early, and does not last too long. For best results, we are getting out early, and hoping to have caught some big trout by 9:00 to 10:00 a.m. After that, it becomes somewhat of a grind for quality trout. I typically give my clients the option to switch gears to redfish at this point of the day as they will usually play longer than the trout. Most will go for the action over the grind, but there are many diehards that will just plug all day for a chance at glory. My hat is off to all of you!

Deepwater access has been a key player in our best catches. I'm not saying that it has to drop off to 14 feet, but if you can be in area that consists of a shallow flat tapering to 4-5' depth, you will tip the odds dramatically in your favor.

Saying that, never discount the large rogue trout that hangs in mere inches all day. They are always harder to catch, but a serious adrenaline rush when you find them. In the past month, I have made two videos of big trout with their backs and tails out of the water. After repeated casts by myself and a client at one of the monsters, the fish would not consider any offering, so we videoed it to save the moment. Getting to watch a 30-plus trout mill around in shallow grass and do her thing is something I hope all trophy trout enthusiasts get to see someday. I have been fortunate to walk up on many, and to this day I still get buck fever.

As previously mentioned, deep water access adjacent to shallow flats has been the ticket. With our super-low tides, bait is hanging just off the fringes of the flats, and moving deeper as the sun comes up. We are still starting out in shallow water most every day, and progressing deeper as the sun gets high. Considering that we are generally in knee high water on average to start, I can not stress enough the importance of being quiet as you step, moving slowly, and making long casts. It is much easier to spook fish in this depth of water than any other. Be smart, fish smart, and do not give them the advantage of knowing you are there.

As the end of summer winds down, so does the charter business for the next couple of months. This does not mean we will be doing less fishing, but does mean that I'll actually get to keep an occasional redfish for the grill, and spend some time planning and plotting for the arrival of fall.

"Remember, a dead fish can float downstream, but it takes a live one to swim upstream." ~ W. C. Fields