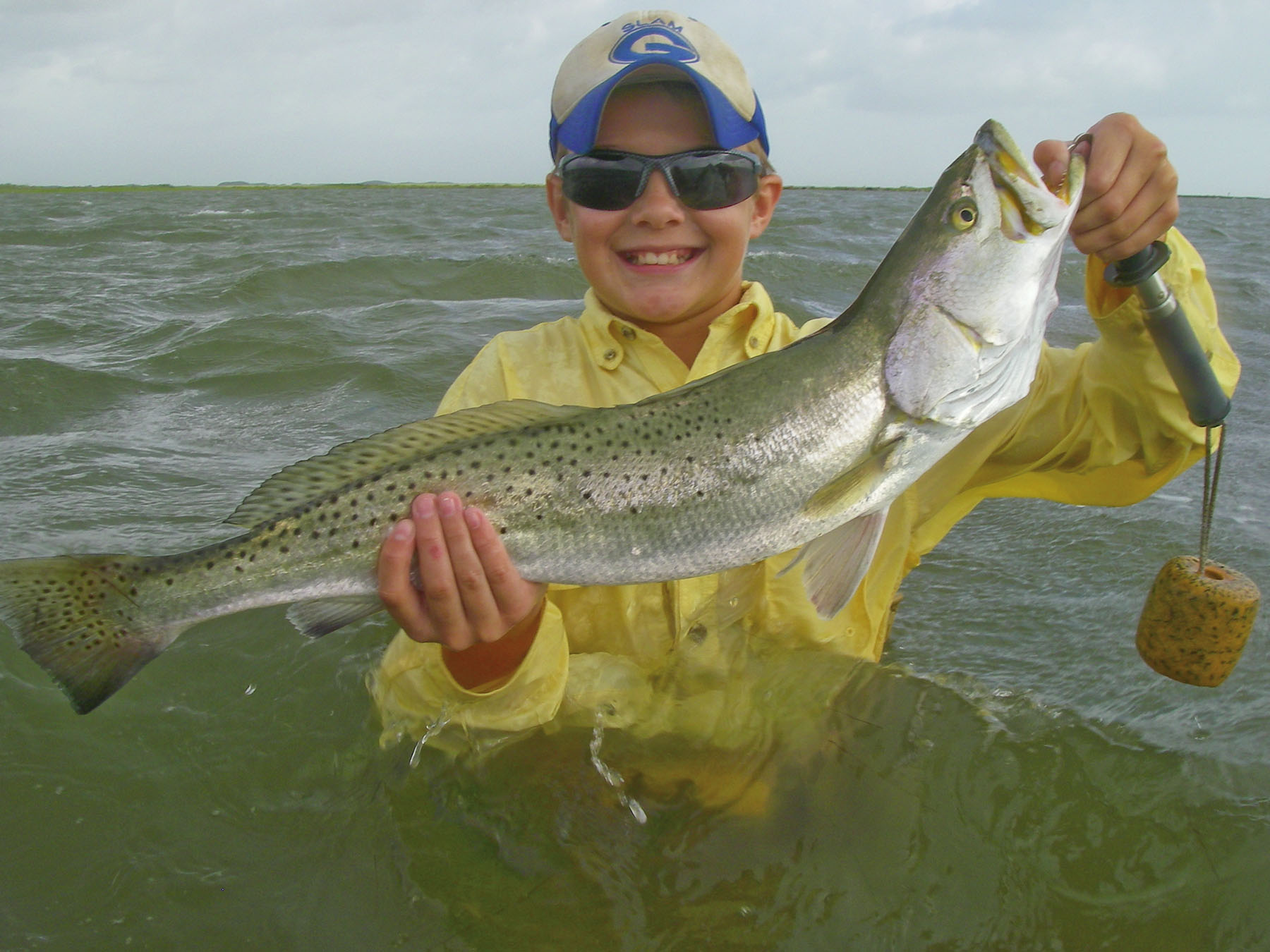 Twelve year-old Brady Childress with a Baffin trout that pushed 29
A record hot summer finds us coming into September and looking forward to fall and some cooler mornings. Personally, I look forward to going bird hunting as much as I like chasing down the largest of trout. Peering through my mind's eye, the smell of gunpowder and a new pup going after his first birds is enough to carry me through the heat this summer has given us. Unlike last summer, we have been blessed with good rains and all is green in South Texas. The deer and quail hunters, myself included, should really benefit from the moisture and green flora that is so apparent as we blaze back and forth to Baffin. Wait a secondthis is supposed to be a fishing article.

After the rain from tropical storms and the runoff associated with them, our bays are in great condition. Water clarity in parts of the bays are as clear as what you expect on cold winter mornings. Knock on wood the brown tide seems to be staying away. Parts of Alazan and the south shoreline have areas that are off-color but in the big picture they are still good.

Trout fishing has continued to produce lots of numbers although the typical size is under fifteen inches. It is not uncommon for my boat to catch 100-200 trout per day but the average size is way down. I would say one out of twenty is of keeper size. For every hundred fish we catch, there is usually one to two large trout landed (over twenty seven).

Time for a vent...I just read an article by Shannon Tompkins in The San Antonio Express News where he quoted Mark Fisher, Science Director for TPWD Coastal Fisheries Division:

"The total number of finfish (caught during the gill net sampling) was up," Fisher said. "But the diversity was up, too. We saw more kinds of fish per net than in the past."
Part of that increased diversity might be a result of anglers concentrating their efforts on speckled trout and redfish.

"Creel surveys show Texas anglers heavily target those two (trout and reds), making them an increasing percentage of the total fish harvested by anglers. The percentage of species such as black drum and sand trout in the harvest has declined despite their showing marked improvement in their populations," Fisher said.

With a higher percentage of anglers targeting and taking specks and reds and fewer taking black drum and sand trout, those non-harvested "small-game" species might be filling the biological vacancy left by trout and reds. A bay can support a certain amount of biomass; it doesn't necessarily care whether it's redfish, black drum, speckled trout or sand trout.

I find several statements in Shannon's article very alarming and I underlined them. The bay system may not care which fish species is making up its biomass but, TPWD should. The vast majority of sportsmen are not buying fishing licenses (which benefits TPWD directly), $50,000 boats, high-end rods and reels and lures, hotel rooms, restaurant meals, etc., to catch black drum and sand trout. If the harvest is leaving such a gap between speckled trout and drum, how about raising the drum limit from five per day to fifteen and reducing the trout limit from ten to five?

Speckled trout and redfish are the money fish on the Texas coast and, frankly, something needs to be done to improve the quality of that fourteen inch speck currently on the end of our line. As recent as ten years ago we would catch a hundred trout that would average better than three pounds (twenty one inches) with more than a couple of giants mixed in. I sure wish it was still the case. Luckily for Lower Laguna Madre anglers, the five fish limit down there is succeeding in restoring that quality.

Trout and reds are holding deep just now. September is a favorite redfish month for me. Large schools will be spotted in the Upper Laguna, Yarborough, Rocky Slough, and further west, deep into Baffin. The majority of these schools will be in 5-7' of water, and are generally easy to spot. It is not uncommon to pop a big trout while fishing these schools, so always be prepared with a camera for a photo op before releasing.

I am fishing with soft plastics almost exclusively this time of year, unless we get a lucky, and early front in September. The 5" Bass Assassin in natural colors is still my top choice for trout (including the big ones). The 4" Sea Shad by Bass Assassin has been excellent on reds and flounder. MirrOlure has a new lure called "Lil John" that is about 3" long and scented. It has been good on all species, but I have found it to be exceptional on flounder. When a couple of fronts roll in and start cooling off the surface temperature of the bay, I'll be shifting more to topwaters and suspending type lures.

"My biggest worry is that my wife, when I'm dead, will sell my fishing gear for what I said I paid for it." Koos Brandt