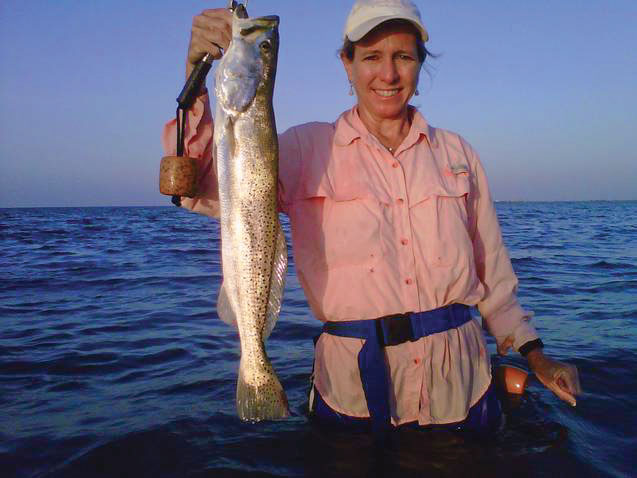 Mrs. Karen Brady with a personal best twenty-eight (CPR). Karen is an excellent angler with a knack for sightcasting and beating up on her guide.

Tropical Storm Don just passed through and dumped some rain on the forever thirsty Upper Laguna and Baffin Bay. Man, did we ever need a flushing down here! This will, ultimately, be huge for a bay that was getting way too salty and uncomfortable to the fish and the equipment that I so diligently try and take care of. Following the large rains of September a year ago, we had a fish kill in Baffin that was blamed on depleted oxygen levels. It will be interesting to see if the same happens this year as we are in another drought, similar to a year ago at the same time. I have a different theory of why those fish died, but who am I to contradict the scientists?

September is a fun month for me as I get to start doing some things I greatly enjoy – other than fishing for big trout. Any who know me or fish with me on a regular basis know that I love shotguns and wing shooting about as much as I love fishing rods and trout. To say that I am looking forward to dove season would be a bit of an understatement. The thoughts of dogs, the smell of gunpowder, and a cold beer after the hunt with friends reminds me of when I was a kid waiting for Christmas.

September trout fishing will have some fat trout in the mix as the final spawns of the year will be at hand. Already we are catching trout of greater girth. It is most prevalent on the fish in the 20 to 25 inch range, but some of the longer fish are starting to catch up. Unless something crazy happens regarding weather patterns the days will still be hot and I will be focusing all efforts on the early morning for the most reliable big trout bite. As much as a I hate to beat a dead horse; areas that offer shallows for night feeding with deeper water nearby so they can slide down after daylight will be my first choices. Early morning on the King Ranch Shoreline, Meadows, Yarbrough, and south shoreline of Baffin will be high on the start list. Whichever area is holding the most bait will be my first choice.

September brings us lots of redfish. Schooling fish is the norm this time of year; however, shoreline wading will be awesome as the big reds point their noses to the south. We are already finding this to be the case watching catch rates shoot up as the height of redfish tournaments and the NASCAR burn-boat season comes to an end (not soon enough).

On many wades we are bumping into schools of black drum anxious to eat our plastic lures. There are so many at times that you cannot get a lure through them without snagging one – but not to be discouraged – the trout and reds are cruising right along with them. This may sound crazy but this is a pattern I actually look forward to every August and September. I have to give credit to Capt. Mickey Eastman, as he planted the drum seed in my head about twelve years ago when my brain was younger and more impressionable. In August 2007 I won the Baffin TroutMasters using this pattern, and none other than Capt. Mickey was there to hand me a $10,000 check and keys to a new boat. So the next time you are wading along and come upon a school of drum, don't cuss them, fish around them and in them, you just might be surprised at what lurks beneath. If you happen to catch a few drum in the process, string them up and have a fresh fish dinner. They are far better than redfish in my opinion.

With lots of calm mornings this time of year I am using small topwater lures versus the big stuff that I normally throw. Favorites are the MirrOlure She Pup, and She Dog - bone/silver, chartreuse/chrome, and Halloween (808 for you old timers). My favorite soft plastic is the 5 Bass Assassin in plum, alewife, bone diamond, and copper juice. With the tall grass I am using the tiny 1/16 oz. Bass Assassin Pro Elite Series jighead. I continue to be impressed with this rig. Try it, and you will be too.

Whoever coined the phrase A bad day of fishing is always better than a good day at work never had their boat sink. -Unknown