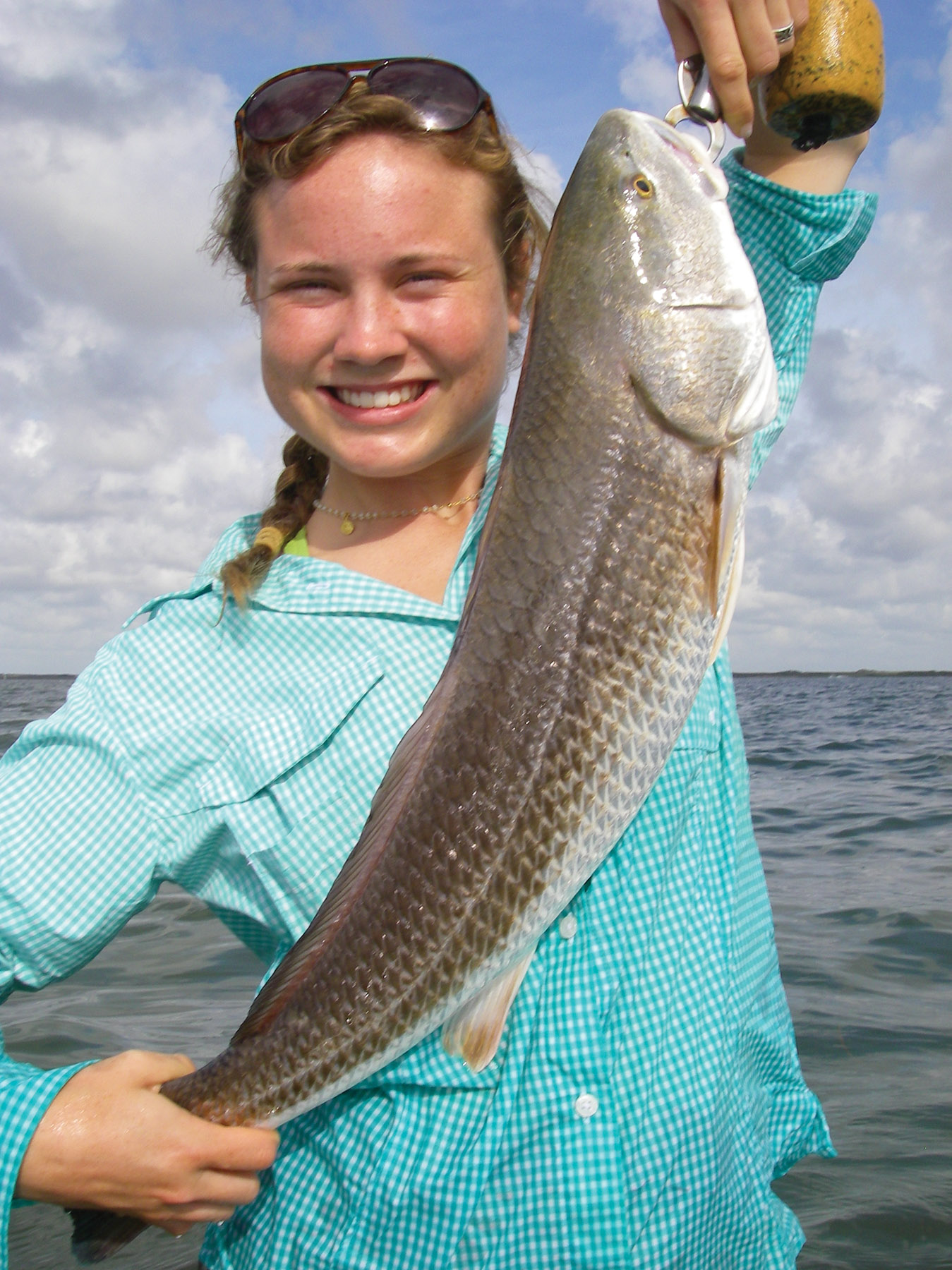 Gretchen Sengelmann with one of many big reds picked off from a school. Gretchen's first wade trip was awesome - first one out of the boat every wade and catching all of the big three.

Any of you that have fished with me for any amount of time or knows me on a personal level, also knows that my favorite off-the-water thing is a bird hunt. My article is supposed to be about fishing, and it will be, but September means the opening of dove season, followed by ducks, and, my favorite, quail. Redfish tails in the morning's calm waters, supersonic doves in the afternoon, the smell of gun smoke, BBQ, and a cold beer at the end is pretty much a perfect day for me.

September is the beginning of a major transition on the waters of the Upper Laguna and Baffin Bay. Large migrations of baitfish and redfish will start taking place and can make for some awesome action if you are lucky enough to spot them. The schools are pretty easy to find on calm days, as they detect the vibration of an outboard for quite some distance away. When they "hump" the water it will make even the saltiest of trout enthusiast get buck fever. When I leave the marina, I like to depart with just enough light that I can scan the bay waters out for about 500 yards. I alter my normal routes to Baffin just about every morning in hopes of finding a new school of reds to play with later in the day as we wrap up trout fishing. It's always fun to point out a big school of fish to clients who do not have the experience to know what they are looking at. I make a mental note of where they are hanging out, and 9 out of 10 times we will find them again in the late morning or early afternoon. After a morning trout bite, it is a great way to finish the day.

Many of the trout we catch in September are as bulging fat as they are in April. Two things occur in September to promote these swollen bellies: Significant spawning takes place during August and into September, and the trout are inclined to gorge themselves as baitfish start migrating to the gulf. September can still be as hot as you know what, but gamefish know what's coming in the way of winter, cold fronts, and a reduced supply of groceries. They are going to take their shots as they present themselves, and September is just the beginning of that feed pattern.

Fishing with your eyes becomes paramount now, as with any other kind of migration, things are moving around daily. The fish you caught under those big rafts of mullet on a spoil island yesterday might not be there the next day. If you find this to be the case, use your eyes, find the bait again, and hopefully duplicate the successful pattern from the day before. I use a spoil island as the example here, but the same applies to shorelines, reefs, etc.

September mornings are going to find me starting in Baffin just about every day. Keying in on dropoffs, natural passes, and hard barriers like spoil islands will be where I start my search for huge schools of mullet. Once they are located, I try to keep myself and group on the outer edges of the biggest part of them. Staying on the edge is good for a couple of reasons: In most cases, the feeding trout will be there picking off the mullet that wanders away from its school, and where the feeding trout are is where I want to be casting. Secondly, if you start throwing big topwaters into a school or just simply get too close, you run the risk of spooking the school of mullet, they scatter, and the concentrated trout scatter with them. This technique, in my opinion, promotes lots of action/bites versus just a few blow ups.

As the day heats up, I'm headed north to find those schools of reds we watched from earlier in the morning. Knowing the general area they are in, now I can be sneaky and approach with some caution and stealth. I usually set up a good 1/4 mile south of where I saw them, deploy the Motor Guide and start cruising until I see them, their bulge of water or some other telltale sign. You are not always going to see the easy signs, so also be aware of where brown pelicans are sitting in the water, which way they are flying when they get up, and also for any concentrations of mullet flipping around.