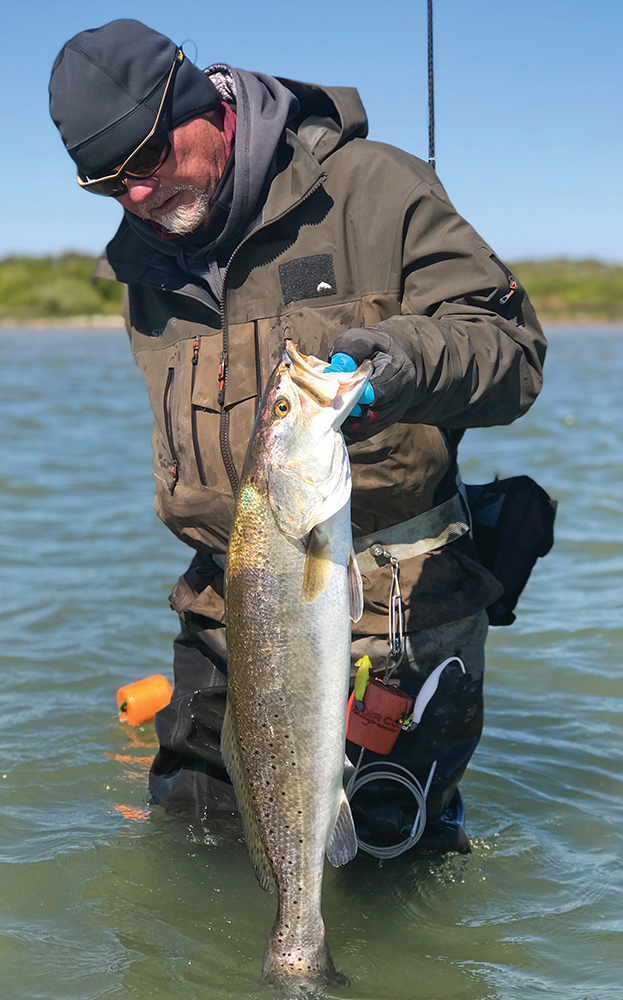 Warming up on the flats, on a cold spring day.

Sitting here with an unplanned day off due to strong southerly wind, I am reminded there could be more of these to come in the fool's month of April.  Undoubtedly, April is one of the most productive months of the year in terms of the average quality of the trout, and also the numbers you can expect to catch. I guess that's what keeps us pushing forward during these traditionally windy spring months.

A lot of good comes from the strong southerly winds this month. The number one thing for me is the approach of springtime tides and the strong currents coming toward us from down south. In a year where we have dealt with a lot of tainted water in Baffin, the new push of gulf water will give us a good cleansing that we always look forward to every year. Of course those higher water levels also bring an abundance of baitfish and fat trout hot on their tails.

The Land Cut, south of Baffin, will be the first to show signs of the movement of fish coming through. Although I do not fish the Land Cut that often, the chatter around the marinas from the bait guides is all I need to hear to know that the push has begun. The southern end of Baffin, Rocky Slough, Yarbrough, and the nearby spoil islands will promptly load up with new baitfish and where I will doing a lot of hunting for these stout tide-runner trout and their unusually large mothers.

There is a big push every year, some better than others, but it always happens. We experienced an epic push of water and monster trout during the event during 2005. Hard to believe it was fifteen years ago, as the memories are still so vivid in my mind. Having a permitted cabin just south of Baffin, good friend Mike Buchwald and I went for an extended weekend to catch some good trout that were starting to push through. To say our timing was perfect would be an understatement, as it stands to this day as one of the best three-day stretches I have ever had in Baffin.

As we got into the water on Friday we landed right on top of them. Mike had the hot hand that evening catching a personal best over 8-pounds, a 7-pounder, and several over 6-pounds. I was wrecking them pretty good, but was catching more in the 4- to 6-pound range. Saturday rolled up on us and we flew out of the cabin that morning to fish until dark. We finished the day with some very impressive numbers of trout from 3-pounds to over 9-pounds. Little did we know that Sunday would be the best day of all. We had pretty much sore-mouthed every trout in the complex it seemed like, and our bite had begun to slow.

Out of frustration we went for a cruise to a new area looking for more bait and fresh lips. The sheer numbers of mullet flickering on the surface was impressive in itself, but what we walked into was completely mindboggling. We stepped off into a bite that was almost every cast for hours, and these were not small fish. They were hitting topwaters to the point that I was getting paranoid about passing boats seeing the explosions from a distance. As crazy as it sounds, we actually switched from tops to Bass Assassins in attempt to be more discreet about what we were up to. The lure change didn’t matter. They kept eating and got even bigger.

When all was said and done, we tallied up all our fish of 6-plus pounds over that incredible weekend. The final score was two over 9-pounds, four over 8-pounds, four more over 7-pounds, and a whopping twenty-three that topped 6-pounds. Mind you, we caught countless trout between three and six in the process. I've been blessed to have some huge catches since then, but that April weekend experience is one that will never be forgotten.

Signing off, I need to get on my soapbox about conservation. This is the time of the year that the trout are full of roe and about to spawn. I'll challenge all fishermen, especially guides, to be mindful of this and practice catch and release as much as possible. Killing everything you catch is not feasible nowadays. In fact, we are long past it. Keep what you will eat as fresh, educate your friends and clients to do the same, cherish the resource, and insure your livelihood (guides).