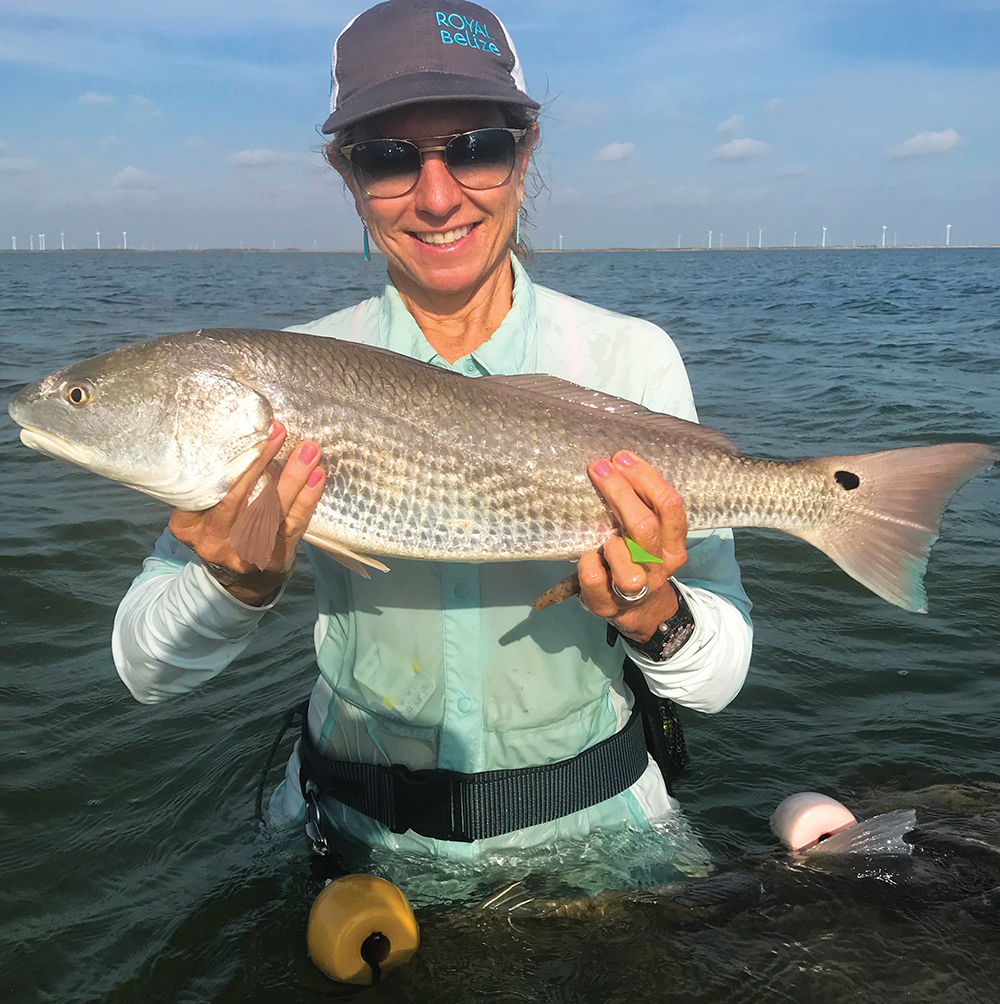 Mrs. Karen Brady, AKA, Wonder Woman. One of many reds caught on this day. Karen and husband Brian are such a pleasure to share the boat with.

Late June blessed us with some heavy rain. In fact, we had over 12 inches here in Flour Bluff. Too much in many cases as parts of South Texas experienced some devastating flooding. Our hearts and prayers go out to those who lost much.

The flip side of the story is that the rain did a lot of good for the hyper-saline Baffin Bay and Upper Laguna Madre. To say things were getting "salty" down here would have been a gross understatement. Besides all the salt residue that lingered on equipment and made for many extra hours of combined maintenance to keep it all working, it had a direct affect on even what lures we could use. Sounds crazy, but the salinity levels had gotten so high that many of my favorite suspending lures, MirrOdine and Paul Brown Original Corky would not even begin to sink into the mid-range of the water column. Since the big rains, that has changed to some degree, but we are still a long way from our average salinity count and things being back to normal.

The heat of summer and the salinity has been hell on the dedicated lure fisherman.One of the strangest attributing factors, in my view, is that the usual rafts of mullet throughout the bay have been very hard to locate in traditional areas. There are some typical bait pods on the south shoreline of Baffin but, most other areas, especially the Upper Laguna, are suspiciously void of bait fish. I have had many head-scratching moments in thirty years of fishing these waters and this qualifies as another one. My thoughts tend to trend back to the salinity, as most of the pods I do find are located in very skinny water along leeward shorelines, which would be the least salty areas of the bay. Naturally, there are some sport fish there also, but not at the numbers you would hope to find them. After thirty years of pluggin' these bays, you would think it would get easier, but Mother Nature is a beast when she decides it's time to humble us fishermen.

If you haven't gotten the message, fishing has been a bit tougher than the norm. I have said it a hundred times and will again, "You have got to get out early for the best trout bite." Do your shallow wading early for trout and moving out to deep structure as the sun comes up. Big drop-offs, deep rocks, and grass are your best bets during these hot months. As a 99.9% wade fisherman, the fish may get out deeper than we can wade in many cases. If you find this to be the case in your fishing, you’re just going to have to swallow your pride and do it from the boat with a trolling motor. Not my favorite thing to do, but whatever it takes to get the job done. I'm excluding live croaker, of course.

The most common thing for me to do at this point on charters is to switch gears and chase redfish. Wading flats and sightcasting is truly about as much fun as any fisherman can experience. If you are stealthy and pay attention, you are also going cross paths with some very large trout.

On a recent charter I had a client that was shocked at my excitement in locating a large school of drum around some deep rocks in the middle of Baffin. As I dropped the trolling motor I told him to come get on the front of the boat with me. We already had Bass Assassins rigged up and he asked, "Will the drum hit them?" I told him, "Probably not, but the trout around them will."

The school of drum were large and they had the 6-foot water turned off-color due to heavy rooting on the bottom. I have been blessed to witness this scenario many times, and in almost all cases, trout have been hanging out on the fringe of the big school, destroying whatever bait that spooked away.

Luckily the pattern held true and my client was in awe of the quality of trout this strategy produced, along with some reds, and a few foul-hooked drum. One thing to point out if y'all ever run across these large schools of mid-bay drum – the results are not reliable when the drum are just suspending and cruising. The schools that will have trout in tow are the ones that are actively feeding on the bottom, and the dirty water is the best indicator of that.