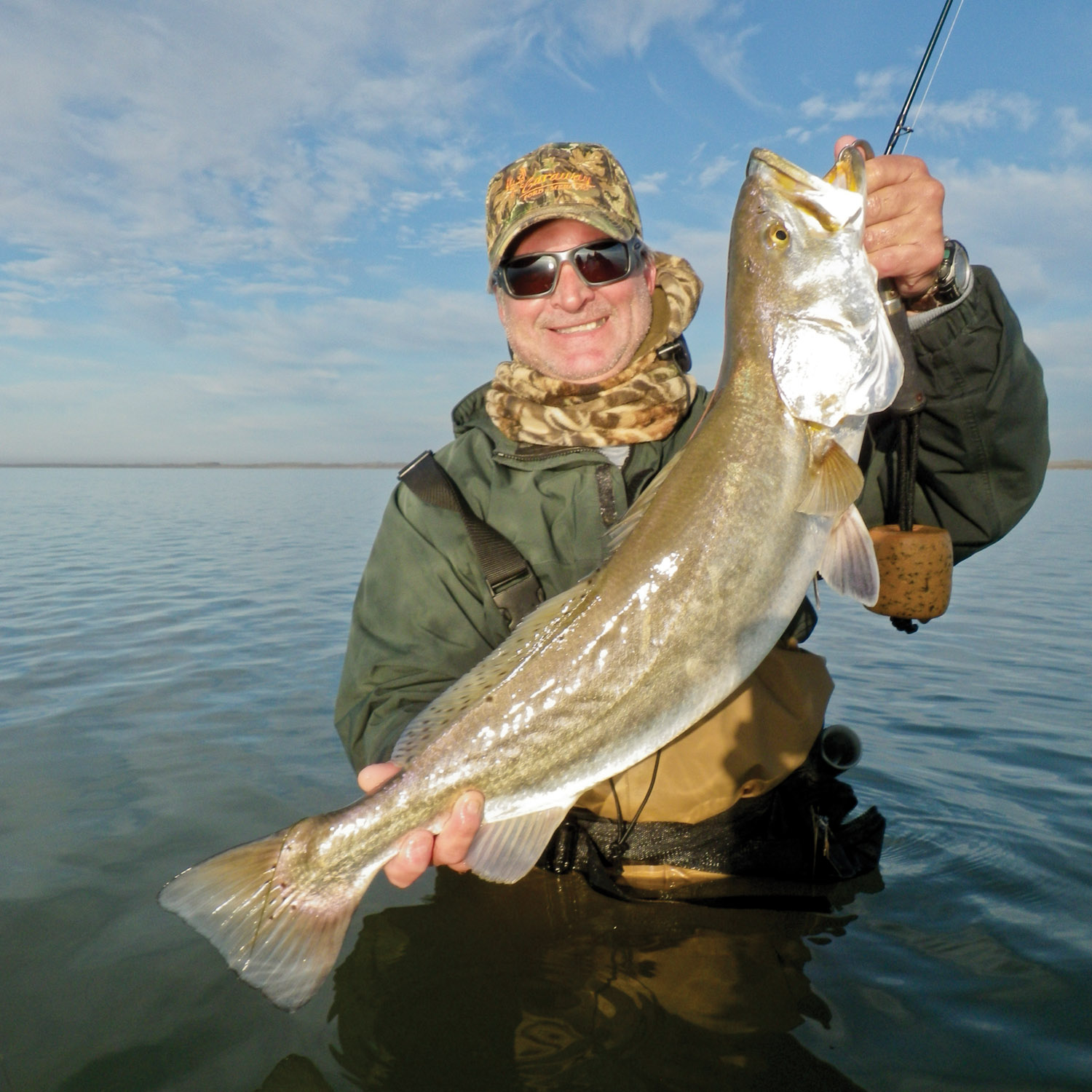 Joe Moon with an exceptional trout knocking on 30-inches. Released!
Our first real cold front just passed through and the house indoor temperature is 65⁰F. That must mean that it’s in the 40s outside. I have so been looking forward to this day.  After a long hot summer, hurricanes, and super high tides, I have been craving the positive effects of brisk north winds. They didn't let me down.

I was on a two-day charter in Baffin, staying at the client's cabin, when this big front was approaching. The first day gave us light wind out of the southwest, hot as you know what, but we were having to wear waders due to the 73⁰ water temps. It was just a stifling day, and the fish seemed to not like it so much either. The bites were slow by my standards, and I just kept looking back to the north wondering when the wind would shift. I could see the line of the front over Flour Bluff, but it was moving very slowly. Baitfish started breaking the surface all around us as we felt the first hint of north wind.  Everyone was hooked up in the next few moments. This lasted for about thirty minutes as the front blew through. Following that flurry, the wind kicked up to 30-plus, the bait went down, and the first wave over the waders was a clear sign to pack it up.

We made it back to the cabin, had a cocktail, enjoyed a good dinner and debated on what to expect for the next day. I found that my best sales pitch for fishing on a north wind in the morning was falling on deaf ears (or just maybe they wanted an excuse to sleep in), but I prevailed and in the end and we braved the elements as the first light started to show itself over Padre Island. Being in the middle of the week, and a pretty stout north wind, we had the bay to ourselves.

We made our first top on Baffin's north shoreline and were rewarded with some solid bites to 4-pounds and a few reds mixed with the solid trout. Then the bite slowed as the morning progressed. I decided a change of venue was in order so we loaded up and headed north into the Laguna Madre. The plan was to get the guys on some reds I had been working and was certain they would still be available. Trolling into the area to wade, I bumped up two reds, and then a third. Oops, that wasn't a red…that was a large trout! As I was trying to point it out to the guys, another of equal size spooked out of the pothole where the first was heading. I put the Power Pole down and it was a race to get out of the boat.

The wade lasted for a couple of hours and we did prevail on the redfish; however, our hearts were somewhere between having fun with the reds and grinding for big trout.  We continued on and were eventually rewarded with a pair of 27-inch trout and a personal best for one lucky customer that taped just shy of 30. One must keep in mind that this was the first significant cold front of the year, very high barometric pressure, and crystal-clear water. Not what you would consider ideal conditions, and I have thought about that fact often since that great wade took place.

I have been plugging the coast for thirty years and confident in my ability to find and catch them any day I'm on the water. But just when you think you know most everything they surprise you with a new opportunity to learn something.

I was really kind of baffled at why such quality fish would eat in such crappy conditions.  After much head scratching and debating with myself, I finally concluded that the trout were just as happy as me about the cooler weather and water. Seems almost too simple to be true, but I honestly think they were just feeling frisky and acting like a young child when the first snow hits the ground. The old cliché holds true - You can't catch a fish without a line in the water.

Winter and spring dates have filled up nicely for this season, but there are still a few open, and guides always have to contend with cancelations. Please don't hesitate to contact me if you think you want a real chance at a trophy trout.

"So much of life is not how you act.... but how you respond." -Announcer of UT vs. Wyoming 9/2009
Remember the buffalo! -Capt David Rowsey