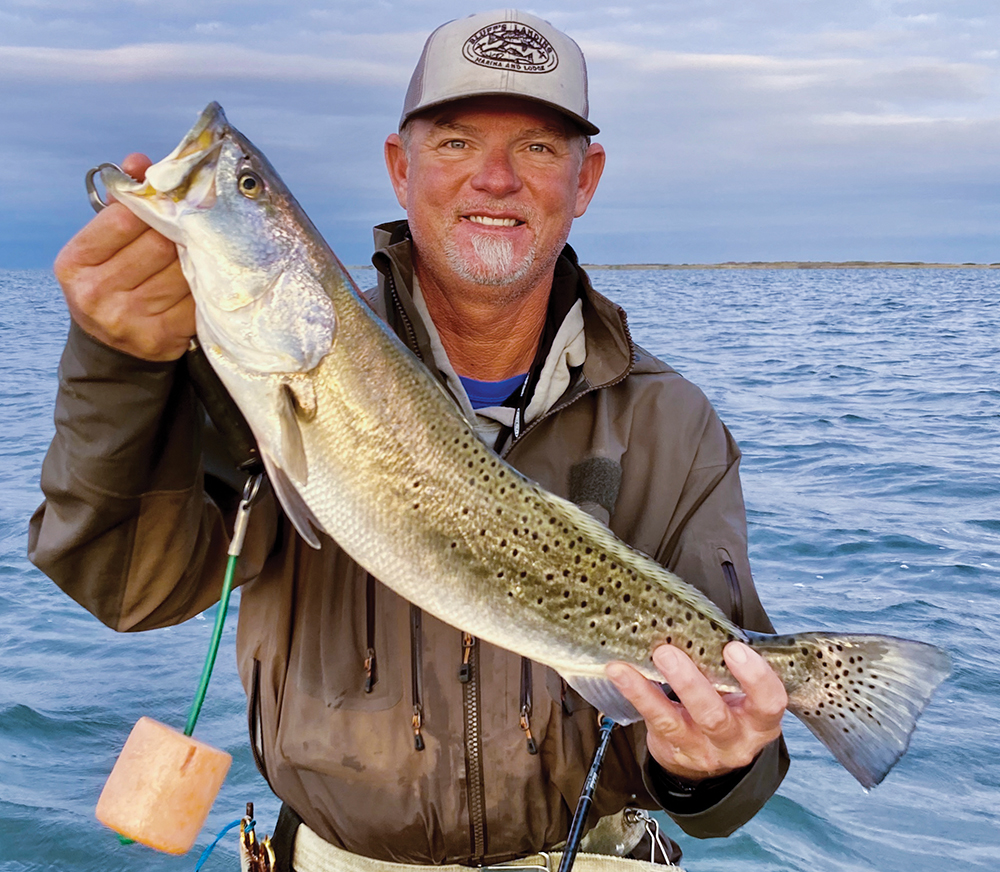 Hope this finds all of you enjoying the holidays with family and full bellies. We have been getting all of that and then some. I have 400 Rudolphs hitched up to the big Haynie Magnum and we have been dropping off early gifts to the best clients I guy could ever ask for. November was very good to us and I look for more of the same as cold fronts continue to make their way into the Coastal Bend.

The true measure of a man may be his character, but the true measure of a trout is in her girth, (would be a lot of really good men in the world if we were measured that way).  Trout have been heavy all fall, but this month will see them really begin to start gorging on whatever they can fit in their mouths – including other trout!  With the majority of the bait supply already making its way out to the gulf, and their food source dwindling, the trout are not going to miss many opportunities to feed. Lucky for us, we have all of these cool Corkys, Bass Assassins, MirrOdines, and Double Ds to trick them into thinking an easy meal is right in front of their face.

With water temperatures holding in the 55-65° range, my groups will be focusing on areas that have quick access to deeper water whenever cold fronts send the water temps plunging. Ideally, these areas will have equal access to shallow flats that warm up quickly as the sun gets high. It is also safe to say that shorelines will have the same effect as warming flats, specifically shorelines that have deep drop-offs nearby. The Upper Laguna and Baffin Bay are chock-full of these areas and provide miles and miles of quality structure for colder water trout fishing.

Here's a tip: If you are new or unfamiliar to an area and want to flatten the learning curve, I suggest spending some time on Google Earth Pro. This can be a great tool for fast-tracking the layout of area waters; i.e. flats, drop-offs, deep holes, etc.

In the early 2000s I became friends with Mike "McTrout" McBride through the original TroutMasters Tournament series. We became very close and still are. I was a sponge for information and would pay special attention to guys whose experience in saltwater was greater than my own. It eventually registered that Mike never talked fishing without mentioning the solunar minors and majors. I was certainly aware of them, but never really paid attention. My agenda was hit the water in the dark of morning, fish my ass off all day, and get home in the dark. Without fail I would smack them hard at some point during those 12-14 hours of wading.

Mike and I were together one day and the solunar subject came up. He was babbling on and I finally caved in and gave him the floor to explain it thoroughly. WOW! That was a great lesson and I am so glad I took it to heart.

The solunar theory is worthy of a whole other article but I would just like to stress to the reader that these four feeding periods each day (sometimes only three) are especially applicable and productive during the colder months. I pay attention to them every day on the water, but find them especially accurate when they occur during warming trends following cold fronts.

A couple of things to keep in mind when considering the bite during a solunar minor or major: #1: They will not work if you are not in the fish! Always try and be in water you have confidence in during the predicted feed time. In fact, get there earlier to setup would be my advice. #2: Just because you have a predicted feed period does not mean that the trout are going to feed heavily. Let's say a minor feed started at 6:45 a.m. and ended at 8:00 a.m. The bite was on fire. A major follows later, around noon. Given that the fish fed heavily on the earlier minor, it is quite likely they are still full and laid up. They will probably skip that midday major and feed again on the next minor, which will occur in the darkness of evening.

My observation over the years  is this, trout are going to feed heavily on two of the four periods every 24 hours. We will be doing well to be in the water for two of them. Always put yourself where it is most likely to happen, especially during warming trends following fronts.

Taking advantage of fall patterns in the Upper Laguna Madre.