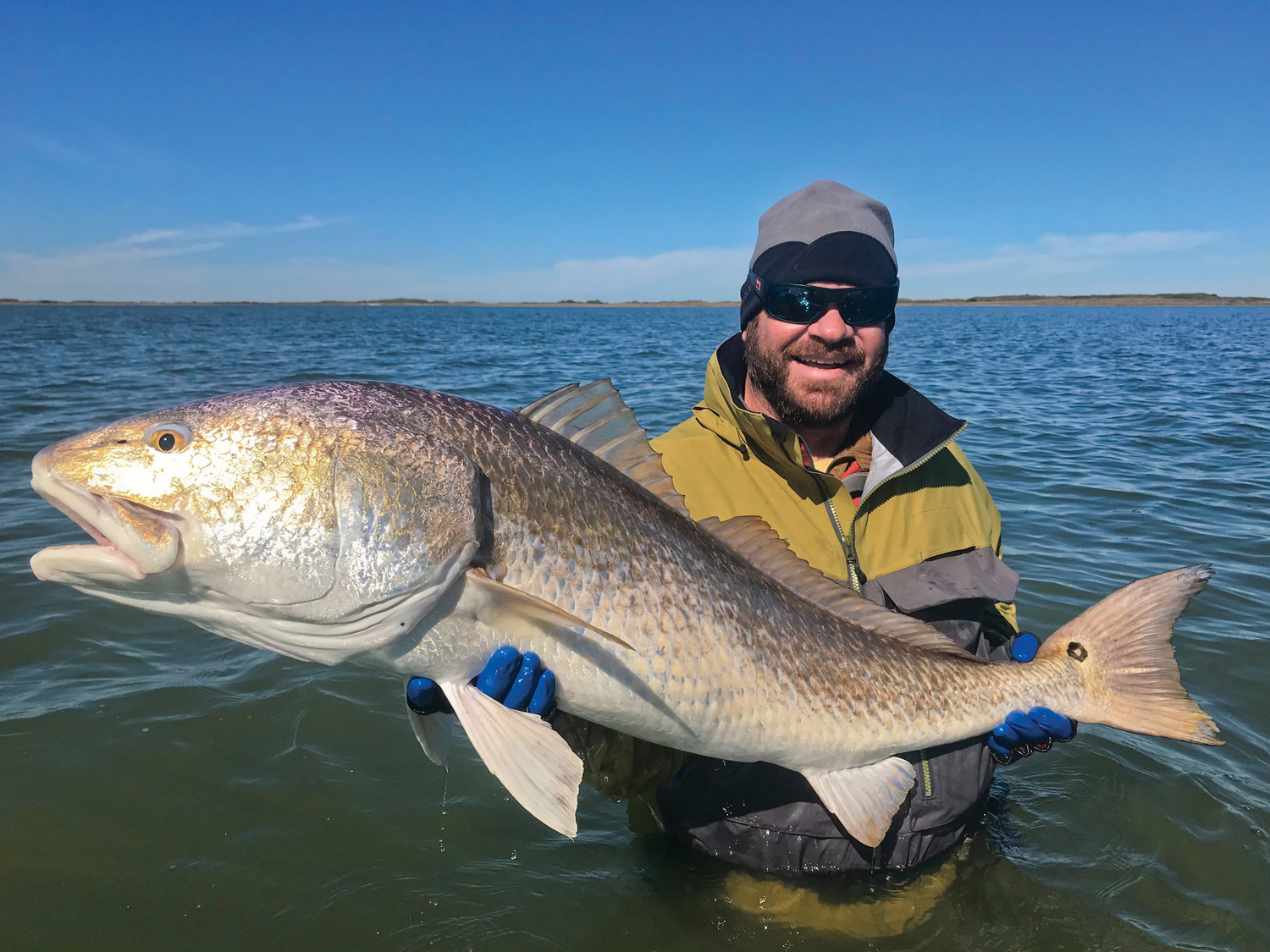 Justin Hoffman with a 45" dinosaur of a redfish, caught in the middle of a great trout bite - Bass Assassin!

The fantastic and fabled month of February has arrived. Does the allure and reputation of any other time period even approach that of the second month for the prospects of landing a behemoth speckled trout in Baffin Bay? Probably not. Especially if you believe everything you read on blogs, forums and social media. But hear me out on this – while February is a proven producer of big fish, my journals show that over the years it averages the #1 ranking no more often than any other month from December through May – in any given year.

I used to look so forward to this month, but nowadays it seems like there are at least as many boats on the water in February as there are on Memorial Day weekend. Say it on social media, and they will come!

The Facebookers, tweeters, and other followers of social media comprise the largest part of the crowd, but tournaments in February also seem to be very much in vogue. Lord knows I have participated in my share since 2000, and some might even accuse me of hypocrisy for pursuing this angle, but it's not. Things are just so much different from 2008 to 2018, and I have been around long enough to realize it and see the effects of the change. The point of all of this is to say that there will be some large trout to be caught in February, but be prepared to join a flotilla of anglers out there, and the by-product of some pretty spooky trout. Be smart while trying to catch them, and courteous to others trying to accomplish the same goal.

As I was flipping through old journals, I realized that I have caught great fish in virtually every bay system between Baffin and Port O’Connor during the month of February. The one thing that really stood out to me was that water temperatures less than 56⁰ really seemed to put the trout on the deeper mud bottoms. Above 60⁰ and a harder bottom seemed to produce better on my ventures.

Many of the best trout were caught on muddy bottoms located close to shorelines, while open bay mud seemed to be just fine if it was adjacent to a flat that could warm quickly any time the sun popped out. There are tons of areas in the Laguna Madre and Baffin that hold all of these bottom conditions. Some of them are very close together and give you the option of fishing two types of structures almost within the same cast. Get out and explore, you will be surprised at what you might find and don't have to share with everyone else.

As of this writing the water is in the middle-50s and dropping. But here in the Upper Laguna region we often see water temperature fluctuations as great as 6- to 8-degrees within a 24-hour period. In case you can't tell, I pay a lot of attention to water temperature. A few degrees can make all the difference in a day of casting practice and catching.

Plastic lure selection has gotten to be totally out of hand with all of the new plastics on the market. Everyday my guys show up with things I have never seen or heard of, and say, "Old so-and-so is really getting them on this one, Captain. Saw it on Facebook."

I just nod and smile, and say "Good Luck." After all, you called and asked my recommendation of what lures to bring. I told you…and that ain't it! Most any plastic will catch a trout, and so will most any color. Certain plastics, i.e. the 5-inch Bass Assassin, day in and day out, will catch more and better fish than any other plastic on the market. Hand's down! That's why I throw it, why I believe in it, and why I guiltlessly promote it.

Most truly salty fishermen know that the Bass Assassin is the top choice of serious grinders, but at the same time complain that it’s too soft and toothy-mouthed trout tear them up too quickly. Well isn't that the whole point...to trick them into hitting it?