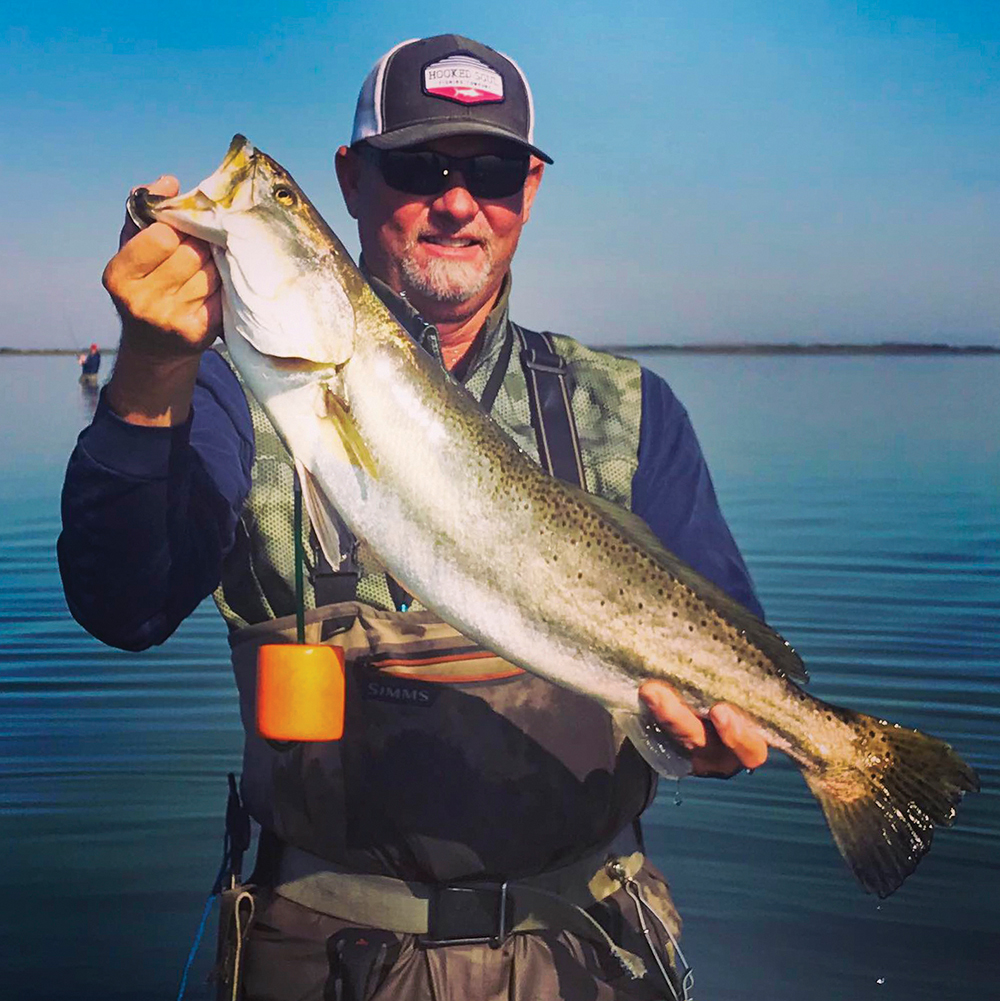 Happy New Year to all. Hope y'alls holidays have been filled with friends, family, and good fishing trips. I’ve had all the above and am very grateful for it.

January has long been one of my favorite big trout months; one that has always been underrated in my opinion. Know that I am somewhat biased on the subject as I caught my largest-ever in January. I get at least a zillion questions asking about the best dates to book. The truth is that any of the colder months can be top shelf. The number one factor for me is the water temperature.

For instance; this year (2019), we have had unusually cold weather in the late fall/early winter period that dropped water temperatures way in advance of typical winter fishing season. Because of that we landed some legit trophy trout in November and early December – the largest being a 9.25 pounder. I had to look back at my records to confirm this, but it had been way back in 2004 since that happened. The number of four- to six-pound trout also shot up – as would also be expected. The key factor was colder water and fish gorging as the temperature dropped. Based on what I am seeing at the moment, I am very optimistic about the possibilities of what January through May will hold for us in the big trout department.

As excited as I am about the quality of fish I am catching already in the early season, the immediate and future continuance of it all rides on our backs as true sportsman and stewards of the bay. If you have ever wanted to catch a trout longer than 25 inches, you simply can't kill them between 20 and 25. They have to grow to become trophies!

Large trout have become fewer and fewer over the years and the amount of work required to catch them has probably increased tenfold. This is simply because so many fisherman have targeted this class of fish and given them a one way ride to the cleaning table. Although Baffin is my biggest concern, I hear the same from up and down the coast from some very salty fishermen. Saying  that, I do see some light at the end of the tunnel, as many of the worst offenders have matured and are becoming catch and release converts. Hey, I’ll take what I can get from them. It may take a while longer to get there, but maturity and concern for their own wellbeing is setting in with some.

January will begin with relatively few boats on the water, which is always a plus. But as fish are caught and word spreads, we can expect more pressure on the resource, and also on our patience. I am already thinking outside the box and fishing areas where I know boats will not be an issue. November and December already found me as far south as Nine Mile Hole, and as far north as Corpus Christi, Nueces, and Oso bays. I do not care where I catch big trout, as long as I catch them, and most of my clients feel the same. Every now and then I’ll get a new client who is baffled as I point the bow of my boat away from Baffin or tell them to meet me at the Nueces Bay Causeway. I take my job and your hard-earned money very seriously, and will always do what I think is best for that day to catch a trophy trout. Trust me on this, I don't want to waste your time or mine!

Regardless of the bay system I'm in, the same basic rules will apply in finding and catching the best trout available. Most agree that muddy bay bottoms are the go-to areas to find the bait that will draw the trout during the cooler weather. All the aforementioned bays have plenty of that close to shorelines and back in the feeder creeks and sloughs. Saying that, however, never overlook shallow sandy areas this time of year when the sun is out. A three degree water temperature rise throughout the day will draw them right in to warm up…regardless of what type of bottom it is.

Without a doubt, this time of year, the afternoon bite is my favorite during warming trends. Theoretically and traditionally, this has always worked well for me to catch some wintertime monsters. However, dumbasses burning shorelines can screw us all over in in a heartbeat when the pattern is in full bloom. Rolling my eyes at them.