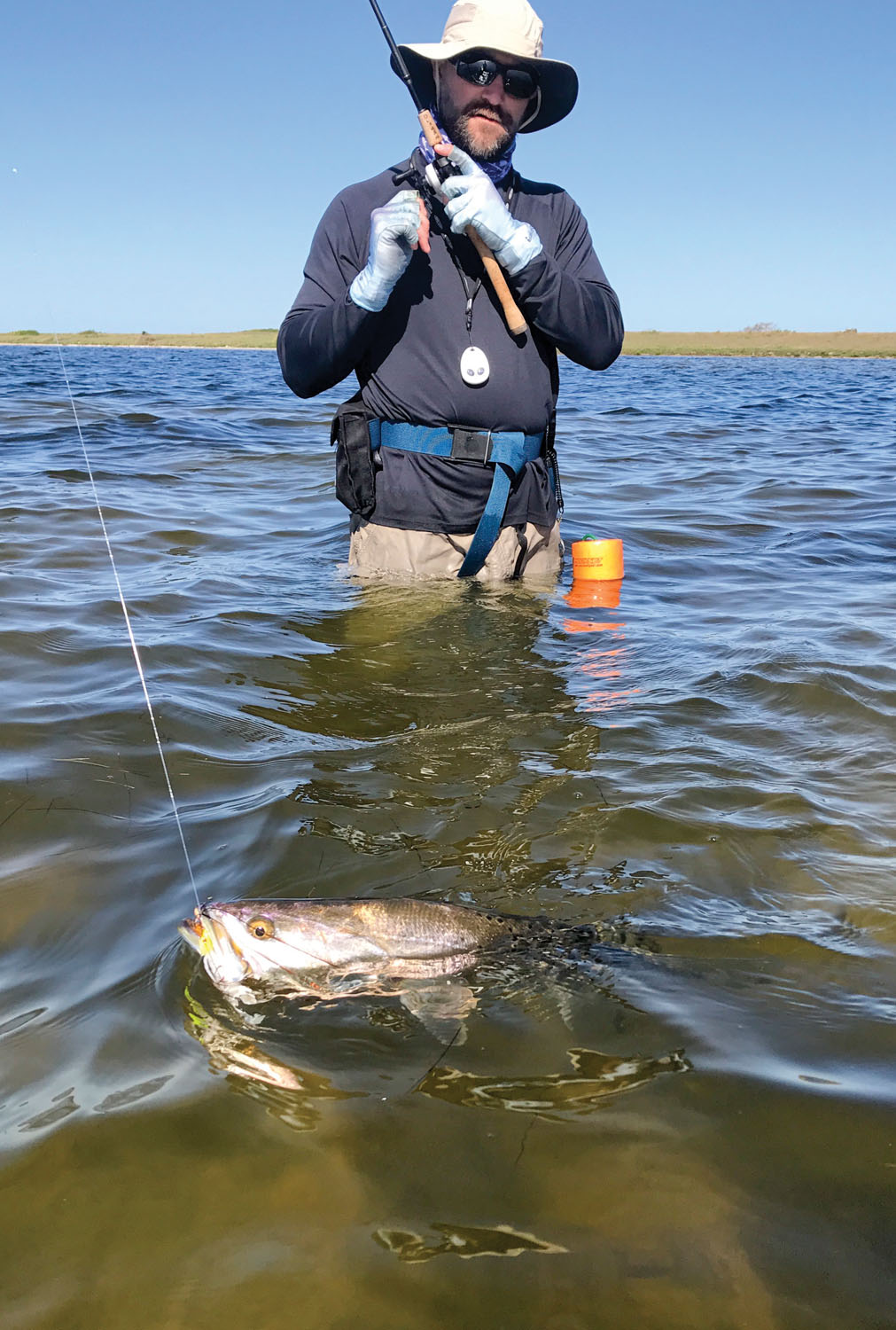 BJ Durham with one of many great trout caught up skinny on a gorgeous day in the Laguna.
I hope everybody is gearing up for a hot summer. I started wet wading much earlier than years past, and many other wade fishermen were far ahead of me on that play. With air temperatures well into the mid-90s throughout April and May, there is no doubt that this summer will feel "special" to say the least.

I see lots more people fishing from the decks of guide boats than wet wading lately, and frankly, I don't see how y'all do it. I had the misfortune to fish from the boat all day recently and I was just smoked by the end of the day. Y'all can have it. I'll stick to waist-deep wading with waves on the middle of my back.

As I predicted in an earlier article, tides started pushing from the south around the new moon of April. By the beginning of May we were in the full swing of things. The whole bay system is just flush with activity – baitfish, skipjacks, cownose rays, and trout. It's truly a pleasure to pull up to your first wading spot and be welcomed by flickering mullet and quick bites from an assortment of gamefish.

We have been experiencing a tremendous bite of late, weather permitting.  Strong SE winds have been somewhat of a nuisance but those will be greatly diminished as we roll into June. Having a game plan everyday is extremely important, and I don't mean just where you think the trout are biting or a favorite spot. Planning around the wind, and figuring out how stronger winds will help you later in the day is a big part of what I live by on the water.

For example: Fishing open bay structure earlier in the day when the winds are lighter, and shallow, clear flats at late-morning to midday as the wind has sanded up the water a bit. Fish are much less spooky when there is a chop on top and the water just barely off-color.

Seeking out these areas also just makes sense as the trout bite slows down towards late-morning and the reds are still willing to play. Another bonus to this is that you never know when you will come upon that giant rogue trout up on the flats while catching some afternoon reds. It happens all the time – I promise!

Something else I should share before I run off on a completely different subject is FLOUNDER.  Holy cow, are we ever seeing and catching them this year! They seem to be everywhere we stop, regardless of the structure type; Baffin and Upper Laguna. For every flounder I catch, I bet I kick up 7 or 8 more. There is no doubt that the regulations established a few years ago have made a huge and positive impact. Hopefully the trout will follow suit.

Spending as much time as I do on the water and around the marina, I am in awe of the way some boaters operate their vessels. Unfortunately, not in a good way.

Anyone who’s been on the bay much lately cannot help but notice how many boats are out there now versus just five years ago. The majority of the boats are flashy, fast, and expensive. Deductive reasoning would typically conclude that the operator dropping this much money on a rig would know how to use it. But this is not the case for many of them, and makes it downright scary for others in their wakes.

We all have stories, bad boating manners and such. My most recent one was a guy in a $90K-plus rig that insisted on running the shoreline between my anglers. As I tried desperately to wave him off, I swear I heard the RPMs increase as he cut between the shoreline and the guy closest to it. Mind you, the seas were virtually flat that day and he could have easily taken a course around us. Frustrating and dangerous!

A few days later the operator of the marina showed me a video of a boat racing through marina on plane, harshly waking every moored boat in sight. Go figure!  It was the same guy that had burned us.

Is this a case of a guy who doesn't know any better, or one that just flat doesn't care? Either way, he needs to be educated.

We have to possess a license to operate everything from a car to a gun. I hate restrictions as much as anyone, but I think it is high time that TPWD start considering a mandatory boating safety and etiquette course for boaters with limited experience.