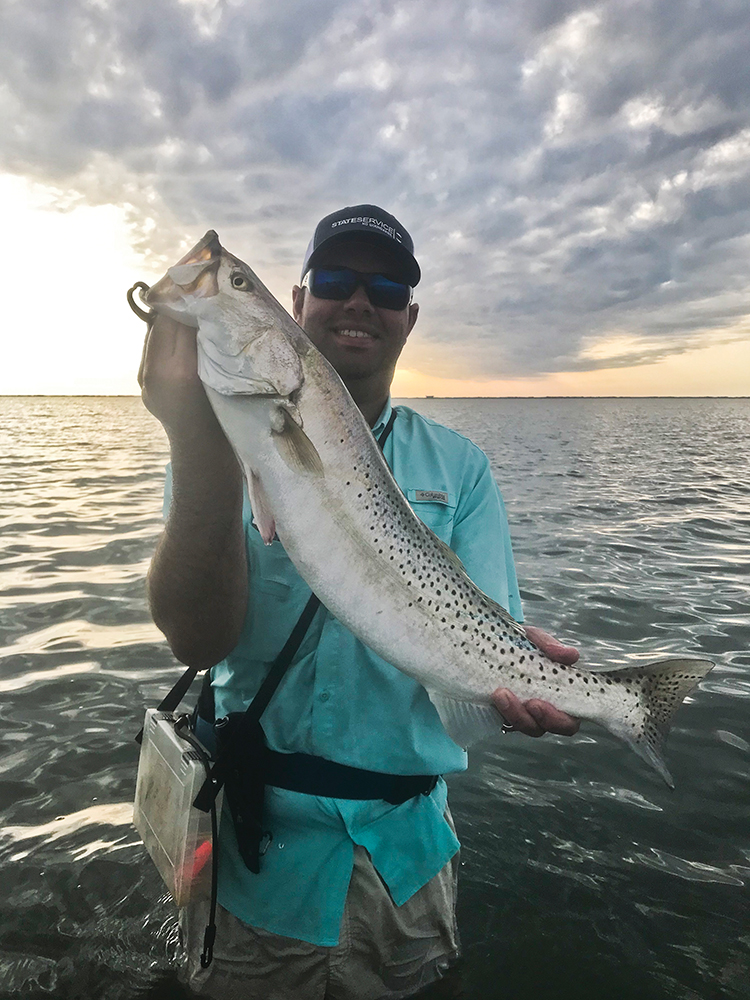 Ryan Whitley of Corpus Christi shows off a pig of a trout taken on the first wade of the morning recently - Bass Assassin - Released!
If you have not paid a visit to the Upper Laguna and Baffin Bay since March, you will like what you see when you get here. March and April winds turned the entire bay system upside down, lifting dead grass from the bottom and brewing the water into a tea-stained mixture many mistook for brown tide.

Well, it’s May and things have settled down. The new moon in April started a big push of clean water from down south (Mansfield), and by mid-May our local waters were restored to a gorgeous fishy-green. That is huge if you are a lure fisherman and like to cast to visible structure.

Yesterday I found myself on the south shoreline of Baffin on a dreaded slack wind day. For those of you who don’t know, the Upper Laguna and Baffin rely on wind-generated current to move the water. When the water is moving, gamefish are much more apt to eat.

Slack wind days are good for boat cruising but some of my least favorite to fish. After a fruitless wade in potholes where I knew trout were holding, I shifted my party to rock structures in deeper water. As I have learned over the years, especially in warmer months, trout and occasional reds will pull off of the flats during calm conditions and sulk around nearby rocks. They are not necessarily active, but if you can get your lure in tight without hanging up, you can hit them on the head and make them eat.

The bites are generally pretty quick or within 15' of the rock pile.  If you think you might want to try this theory for yourself I'll give you some tips.

First, use the shortest shank jighead you have.  I prefer the Bass Assassin Pro Elite in 1/16-ounce. Another option is a weighted worm hook. A non-weighted hook will work, but much slower to get to the bottom where the fish are.

The second tip is that rocks are no different than any other type of structure. Bait presence is a huge plus and mullet around rocks are almost a homerun in summer. You can catch some trout with no bait present but your odds are much greater when they’re there.

The last thing to remember is to never crowd the rocks.  Stay a cast away and don't walk on them – go around. If you happen to get your lure hung up, break it off and re-tie. Once you have walked up on the trout in the rocks they’re done! Keep your distance to be successful.

As the old saying goes, "Change with the times or be left behind." For years I abstained from social media (and still not a fan), but I felt I had to get on Facebook a year and a half ago for my charter services. I will admit it has been beneficial, especially for filling cancellations.

I remember someone telling me, "Don't do it, Rowsey. You are not going to like what you see." Boy did they ever nail that one.

Being more adept at how the FB engine works now, I can see what they meant. Point being; the number of meat hauls and dead fish photos from our area since the kickoff of croaker season is amazing (negative context).

The winter and spring season of 2018 was way off from the norm for myself and others. The numbers were down in general and the giants were fewer still. For those of us on the water every day, it's very obvious that things have changed.

Could it be that this semi-landlocked bay system has been pounded by croaker for over 20 years now? Or maybe it's the 300% rise of charter captains
since croakers became so popular and anybody can do it?

Maybe it's the tripling of saltwater license sales over the past several decades? Maybe it's not the bait, guides, or fishing pressure at all - just the fact that most kill everything they catch to endorse themselves on social media?

Croaker is a big part of the problem, no doubt, but that's like blaming the gun for a murder. The truth is we live in a "Me First" world and most are not concerned with how our bays have declined from their glory days. All that matters is how good they look on FB or at the cleaning table.

With the convenience of cell phones and waterproof cameras, there is no excuse for killing so many fish if you want a real future in quality catching. Be a steward rather than a problem. Practice catch and release.