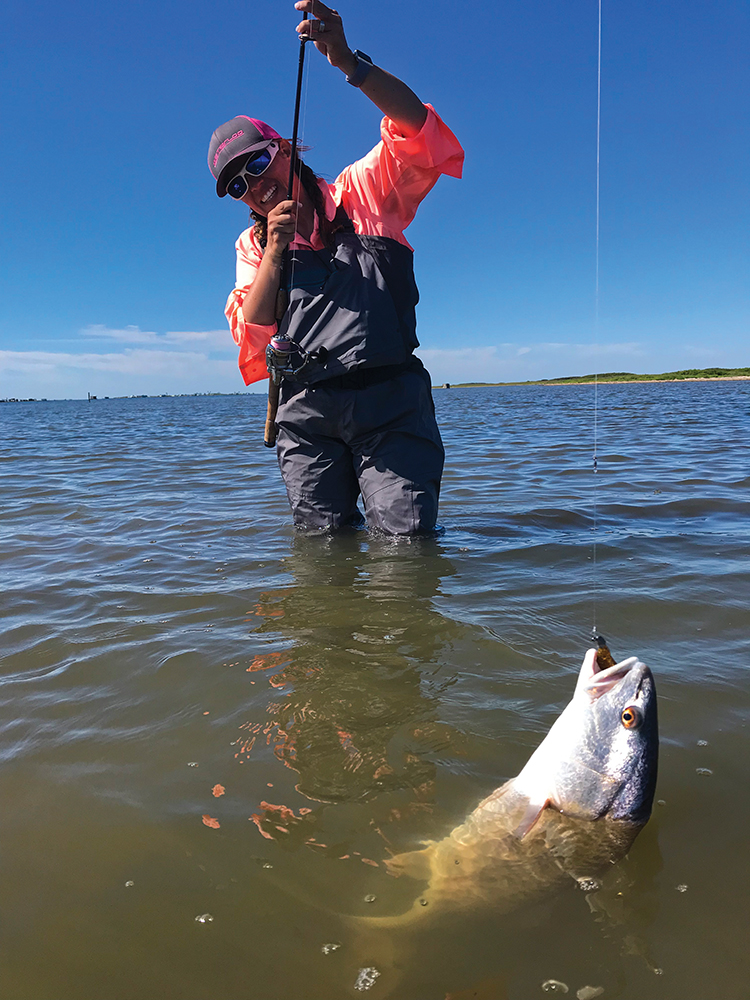 Adriana Felts closing out our last warm day in waders with some hot redfish action.

Summer sure showed up in a hurry this year. I dumped my waders and was enjoying the pool after a day on the water much sooner than in previous years. We all have "our thing" we hate doing every day; mine are as silly as the routine of getting in my waders every single morning and walking across the parking lot to put the boat back on the trailer at the end of every charter. Yep, that's it…. but at least I'm dropping the Simms waders for a pair of Simms flip flops walking out the door. Now if I can only find a youngster who would have the Haynie filled with ice and launched for me, life would be even more excellent.

Late spring and early summer thus far have been pretty darn windy. When it gets too high it can become a real nuisance, as the waters from Baffin and south of there have had a much lower tolerance for high winds this year than they have in the past. My exploration trips down that way have been discouraging, but I'm hoping the lighter winds in June will open up tons of new water to chase trout that have, mostly, been unmolested during the winter and spring season.

For the record, wind is a good thing for fishing in this area. With very little tidal influence; our currents are predominantly wind-generated; it just becomes too much when it muddies everything up. Wind less than 20 mph is actually much better for fishing and catching than slick-calm days.

Being surprised with some folks that showed up to the dock for a charter, I was spotted scratching my head as they informed me that they had no interest in wade fishing. They had to be fished out of the boat. YIKES!

Now drifting is not what I like to do, not how I fish, and not what makes me successful as a full time guide. The upside to the scenario was that they were diehard bass fishermen and knew how to work lures.

As we idled out of the marina into a 20 mph wind, I scratched my head again and pulled a page from the playbook of legendary fishing guide, now retired, Doug Bird. I pointed the big Haynie and 350 Mercury south and never let up until we were in the far reaches of the Land Cut. I had made this run a week prior without much success. The water was dirty and I had issues with the trolling motor.

This trip looked more promising. Bait was prevalent almost the whole way through the Land Cut and my optimism increased as I shut the boat down. I put out a drift sock and dropped the trolling motor. I had one of the two gentlemen tie on a MirrOlure She Dog, while I tied a Bass Assassin on a 1/4-ounce jighead. I heard the water explode before I could get the drift sock to open and the trolling motor deployed.

I looked up to see Johnny Bass bowed up on what turned out to be a fat 5-pound trout. Jimmy Bass was watching the show and let his She Dog sit motionless in the water, paying it no mind. Apparently that motionless topwater was just what the next trout wanted and she crashed it. Jimmy fought her like a pro and I got lucky to grab her on the first pass with the Boga Grip. A beautiful 7-pounder.

We spent the rest of what turned out to be an exceptionally rewarding day on about a one mile stretch of ledge in the Land Cut. We landed over 100 quality trout, with maybe 20 going over 5-pounds. That early-morning 7-pounder was the largest of the day. In all my years of fishing down here, I had to mark this one up as my best day ever, quality-wise. And off of the deck of a boat at that. Thank you, Capt. Doug Bird for the years of advice on how to do it in the Land Cut.

In closing, our days are already getting hot. Your best trout bite on artificial is going to be before 0930. If you want to stay on trout all day, you will, generally, be wading deeper for the rest of the day and working Bass Assassins off the bottom for the most action. Saying that, you are in Baffin and there is always that big, lone, rogue trout that insists on staying skinny. If big trout is your game, stay skinny.