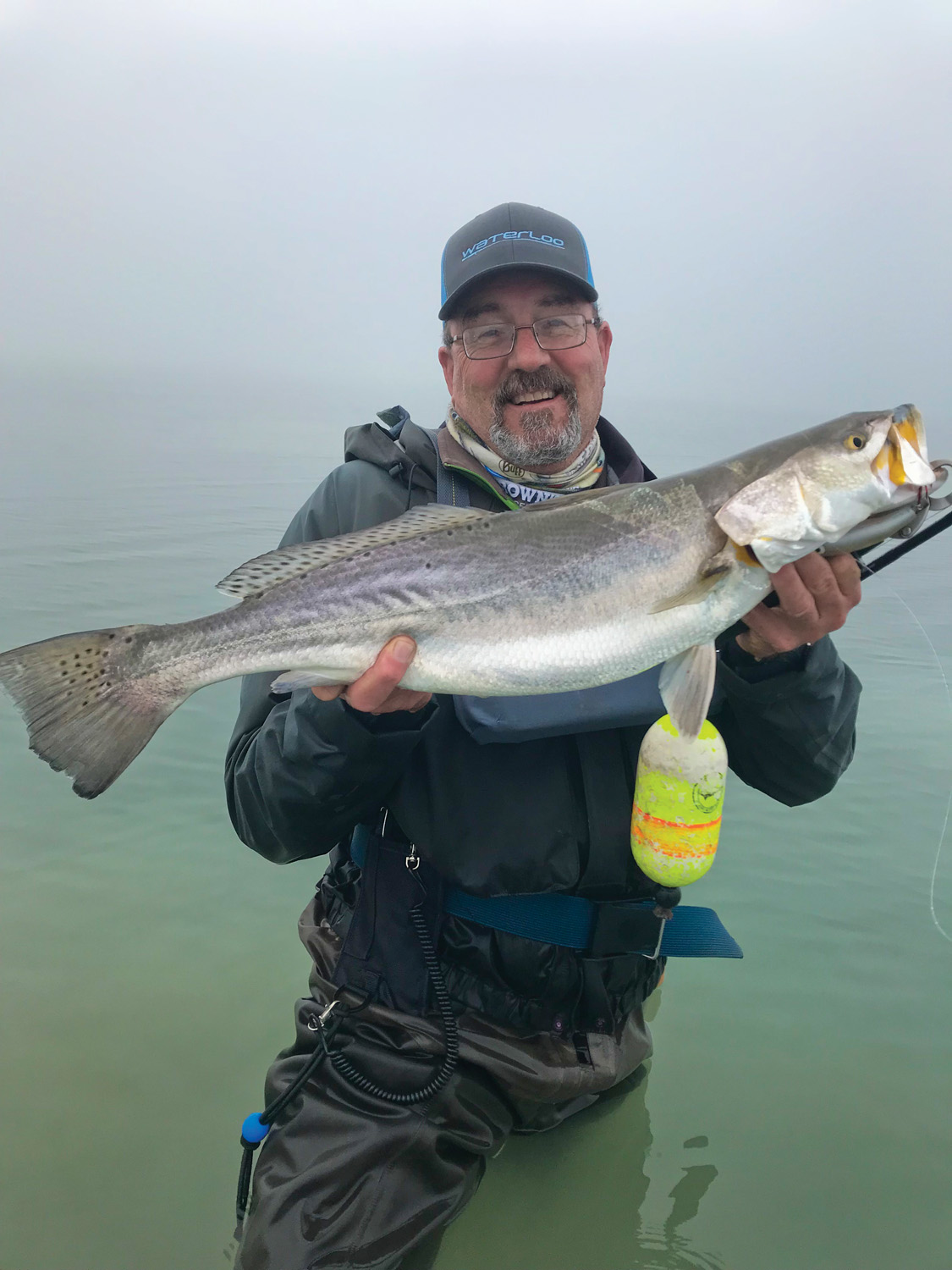 Allen Williams with a gorgeous trout caught shin-deep in 47⁰ water. The trout moved into the shallows to grab some warmth and we were waiting for them. Another great morning!

Anyone who knows me also knows my stance on conservation and releasing all trout over twenty-inches. I'm no tree-hugger or snowflake, and love to eat fresh fish as much as anyone who has ever made a cast in saltwater. Spending as much time on the water as I do, you tend to make some pretty keen observations about the health of the bay and the fishery that the casual observer would not recognize.

As we have nearly pushed through February and caught thousands of trout thus far, I have noticed that the big, big trophies are not coming to hand as often as they have in the past. What is coming to hand are two- to four-pound trout and the majority of "best fish of the day" are in the six-plus range. Of course, we do slip up and catch some much larger than sixes but, my point is that the frequency is way down.

I have a pretty talented bunch of grinder clients that board my boat every day. They are experienced, have great gear, and the passion to hunt for the best trout in the bay with me. Including my own, there are four lines in the water at all times, on average. On the low side, I'm estimating each man makes 500 casts per day or, as a group, we make 10,000 casts every five days. As little as five years ago that many attempts would have produced at least two trout per day of seven-plus pounds. This has not been the case over the last couple of years.

Spending time at any trophy trout tournament of late, the evidence is pretty clear. The average big trout coming to weigh-in are in the six-pound range, not the eights and nines of past years. So, what has changed?

For me, it's a complete no-brainer. If you are keeping trout between 20- and 25-inches, those fish have ZERO chance of growing to 27-inches or longer, and someday breaking over into the classification of trophy trout. It's really that simple.

Here’s an analogy for you. If any of y'all are deer hunters and know the basics of growing native trophy deer, ask yourself, “Would I kill a three-year-old ten point that scores 150, or let him mature until he is seven and scores a possible 190?"

Again, no thought required…you let him mature. Maintaining a healthy trophy fishery requires the same dedication and mindset by all utilizing the resource, especially by those like myself who are guides. If you are going to make a living off the resource and promote trophy trout charters, why would you kill the recruitment class of 20- to 26-inch fish that would or could have become trophies?

I challenge any fellow guides or recs to gut check themselves and seriously consider the bigger picture. Keep only the trout under 20-inches, if you have to take some home.

March can throw us some of the craziest weather of the season. Whether it's a blast from the north or pumping SE wind, you better buckle your hat down tight because it will get "western" this month on the water.

The upside is that if you can withstand Mother Nature's fury there will be some of the heaviest fish of the year caught.

I am approaching thirty years of wading in Baffin and the Upper Laguna Madre. In all those years I have never seen the waters of both bays as clean and clear as they are now, especially at the same time. The Laguna looks like an aquarium and Baffin is very similar. At times, the water clarity has made for some tough conditions to catch great trout, especially on days with light wind. As the wind picks up you can expect a better bite.

I am counting on March’s wind to add a little color to the water; i.e., adding sand from the bay floor to the insane clarity we have become accustomed to fishing, and cooking up that "trout green" water condition that is ideal for sneaking up on and fooling big female trout into taking a non-organic baitfish into her mouth.

Winds always play a big role when formulating a game plan for any given day on the water. Southerly flows will open up the south shoreline (Kenedy Ranch) to some great fishing, as its normally shallow flats have been hammered with cold water temps and north winds. You can bet there will be some monsters caught in its miles of pothole laden flats.

Go get 'em, and practice catch and release.