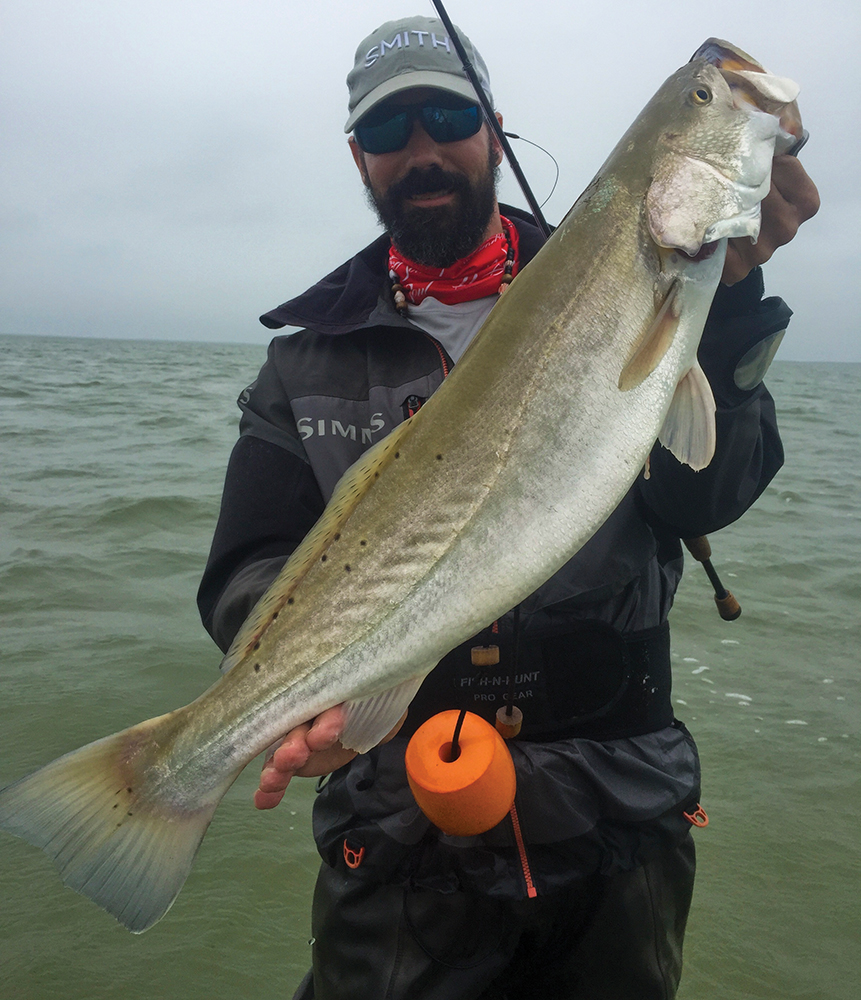 If you can't get excited about trophy trout fishing during the month of March, you had just as well start selling off all your gear and taking up online clearance sales at Bass Pro for the ultimate outdoor experience. March is DEFINITIVELY the heaviest month of the year regarding trout and the favorite month to test your wits and wisdom against Mother Nature while in pursuit of big, heavy trout.

I'll be the first to admit that I have cussed March to no end while getting slapped in the back by 30mph southeast wind, only to have them shift to the northeast at 30mph by the next sunrise. I know what I am made of when it comes to fishing hard and grinding it out in tough conditions, but March never lets me get comfortable and pushes me harder every year (maybe it's not really harder, just me getting older.)

I do not mean to sound like I am complaining, as those same winds bring with them some fish catching miracles to the trained eye. Baffin and the Laguna have very little tidal flow from the gulf passes. Both bay’s water movements are primarily wind-generated. Therefore, a good blow while conducting trophy trout hunts is very much a positive. There are but two winds that I do not like; a screaming northeaster and no wind at all. Other than those, I say let it blow.

As many of you are aware, the boat ride in the Haynie is 21 miles from Bluff’s Landing Marina to the Point of Rocks where you enter Baffin. That 21 miles is known as the Upper Laguna Madre (ULM). Historically speaking, the ULM has been as productive for big trout bites as Baffin proper. My educated guess is that it will produce some quality fish this season, too. But not nearly as many as in years past.

The reason is grass. Solid grass. Fewer sand holes than ever in memory (less productive structure to target) and, crystal clear water (bottom sediments held in place by grass.)

Other than a few scattered pockets of sand every 100 yards or so, the bay floor is a continuous blanket of shoal grass. The once prominent sand holes that provided so many targets to cast toward, and game fish to hunt their prey around, are all but gone this season.

Imagine having a deer feeder on a five acre plot with just the right amount of brush. You would be able to see all the animals come and go. Then, the next hunting season the brush suddenly became so thick you couldn’t see the deer. That’d make for some tough hunting, right? Same for trout fishing when the sand holes become overgrown with grass.

The lack of sand and grass diversity also makes for another undesirable issue, and that is crystal clear water. Yes, it is pretty to look at and drive a boat over, but it makes for some very tough fishing conditions. The abundance of grass acts as a filter during high winds and prevents silt and algae to suspend and allow the water to become “trout green" the way we like it.

Trout and reds tend to be very spooky in the clear water, requiring much more stealth on the part of the angler, longer casts, and a lot of them. Unlike the Upper Laguna, the water in Baffin is looking prime for March. Whoever determined that seagrass takes a lifetime to regenerate may want to rethink their thesis for the Upper Laguna.

As we roll into March, I will be focusing primarily on Baffin Bay. I will scout and hit some areas daily in the Laguna, but as long as the water remains air clear we will be headed farther south. History tells me that the big girls will be staged most reliably on windward transitions in open water and along shallow grass lines. These will therefore be my most frequently targeted areas.

On the rare low-wind days during March, large rock piles in Baffin will also get a hard look for big trout. Off-colored water, rocks and subsurface lures do not make for an easy or inexpensive day of fishing. If you can't see the rocks you are going to stay locked up on those lure thieves all day. The topwater aficionados have the advantage in that scenario. All blowups, no rock hookups.

In closing, the March trout are full of eggs. Give them the chance to spawn before they hit the ice chest. Be proactive and do what is best for the health of the bay and the fishery. Keep a few small ones for a fresh dinner but release what is not truly needed.