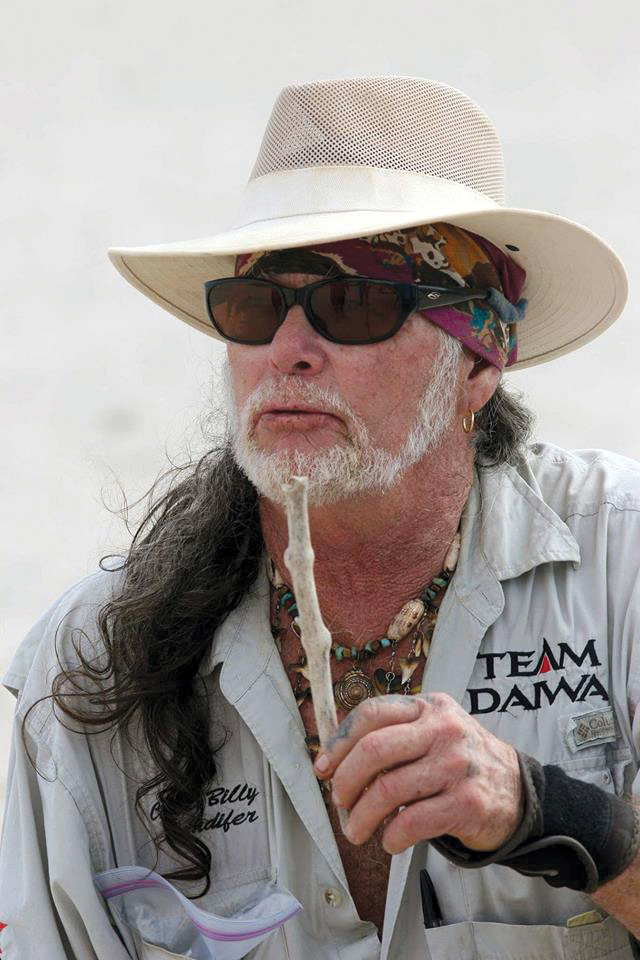 Dad holds court in his chambers of the executive office.

March 30, 2018; I was thigh-deep in Baffin when a text message arrived from good friend, Aaron Baxter. I met Aaron through Capt. Billy Sandifer and Dr. David McKee. It read, "Just wanted to let you know that Billy passed away this morning."

I couldn't believe what I was reading. I had visited him that Tuesday and he wanted me to make some new CDs to listen to (he loved a good ballad) while trying to stay comfortable with his cancer diagnosis. I told him I would have them by the weekend but never got the chance. He passed that Friday morning.

I met Billy in 2003 through Mike McBride. They were heading down the beach for a play day and Mike graciously invited me along, as he knew I wanted to meet and fish with the Padre Island legend.

Luckily, I got the front seat next to Billy going down and coming back. He gave Mike nine kinds of hell that day, and I laughed at his cuts on Mike and stories all day. Little did I know my time was coming to be on the receiving end of Billy's whip-like tongue of truths and brutal humor. I learned many things about Billy over the next fifteen years, and realized early on, if you were the target of his wit it meant he loved you. He must have loved me a lot.

In all seriousness, Billy never had any kids, but he had a handful of young men he called “his boys." I realized I was one of them about a year into our friendship when he began signing his emails as, “Dad.” I felt extremely honored that he thought of me and our relationship in this way.

Everyone knows Billy was the king of beach fishing, but something y'all may not know is that he loved bay fishing as well. I was in the heart of my tournament fishing career when we met, not yet guiding. Billy was the only man I would allow to accompany me when pre-fishing an event. I knew our bond was so tight he would never let even the name of a bay system slip his lips.

Billy loved those ventures as we usually caught big trout at my best spots. One day in Nueces, I pulled up to a favorite area that was just jammed with bait. I was quick out of the boat while Billy was going through his lure color ritual and being slow about it. My second cast I caught a 6-pound trout and started ribbing Billy about being so slow. My fourth cast brought a 7-pounder. Billy was still in the boat.

I released her and rolled back onto the deck of the boat, when he asked, "Why the hell are you getting back on the boat?" I answered, "We’re done here. I know they’ll be here on Saturday and I'm not gonna sore-mouth ‘em.” Heading to another spot, I thought he was going to break his dentures in half, cussing me as I cranked the engine. All day and the rest of our lives together he never let up about it.

Another time we went incognito in his flats skiff. We did all we could do for the day on trout and he wanted to catch something on his fly rod. I was poling him around a great looking area when I spotted a red – 15 yards at 1:00. He spotted it right away and just as he was getting into his first backcast I told him to stay still. He fired me a glare from hell and I said, "Look at all the big trout around you." We were both in awe.

All we had seen was the red but there must have been nearly 40 trout in front of us from 6- to 8-pounds, (no exaggeration). By the time we realized what was going on they were onto us and hitting their evac route. We caught none of them, but closely monitored their movement from the poling tower. I would use the lessons learned that day to win a high-dollar tourney a year later. Billy and I went back a week after the tourney and had a field day.

I never took the time to learn to fish the beach correctly until Billy came into my life. Of course, he was the master of surf fishing and built his early reputation on sharks. By the time I met him he had a new first love on the beach, and that was trout. That being my own passion I felt like I had hit the lotto.

Imagine being a young man, eat up with catching trout, and now being trained by a living legend. I was so blessed to ride up and down that beach with him as he pointed out formations of sandbars – why one was a sweet spot and the other was no good. I was blessed to do that with him so many times that I lost count.

He would share his knowledge of Mother Ocean, the wrecks that always produced, and the name off all the flora and birds on the beach. He showed me old shipwrecks washed up in the dunes, told stories of animals, ghosts, hearing Indian flutes in the night, where old friend’s ashes were spread, and wow me with his philosophical side. The impression he made on me was like no other and I am so glad he thought of me like a son.

One day, coming off the beach, his bouncy old Suburban rocked me to sleep. I woke up and said, "I'm ready to get home."

Billy looked at me and said, "Kid, someday you'll realize that you’ve been home all day. Right now you’re just going back to the house." He was so right.