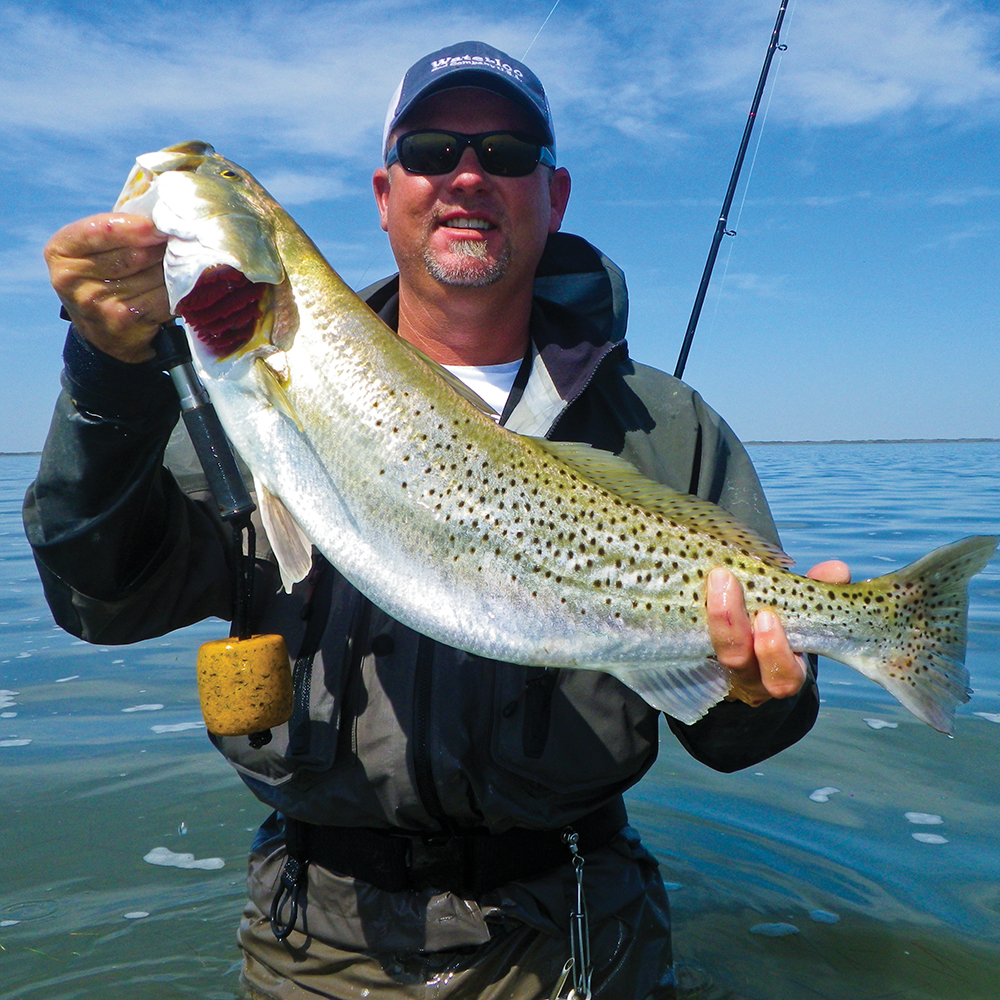 A legit November trophy for the author that ate an alewife 5” Bass Assassin – CPR!

My 2019 books are officially open for trophy trout hunts in Baffin and the Upper Laguna Madre. I would encourage you to book sooner than try later if you are serious about getting in on some quality dates. Many thanks to all my client friends that have already taken the time to guarantee their days on the water with me. I am humbled by your confidence in me to produce big fish and great memories on the water, year after year.   I cannot promise everyone a ten-pound trout but I can guarantee you will walk away with a better understanding and more knowledge of what it takes to gain a chance at trophy fish in the future.

Without a doubt, fish and wildlife sense the change of seasons that is approaching. Every front that passes through makes them feed a bit more aggressively. They are not going to miss a chance to put on some winter fat before the days of cold weather and water settle in in earnest. As the largest supply of bait is currently in full migration to the gulf, expect to catch some unusually fat trout at the end of this month.

An important consideration for November is that it is, typically, not quite cold enough to put trout on a true winter pattern. Saying that, though, every year is different and I have seen it absolutely explode wide open in November. In my experience you are going to find the trout to be gorging like winter trout, but still acting as solo predators. As the water temperatures and bait supply decline with every passing day, you can expect more large trout to be utilizing the same areas to pick off the limited bait supply. This will most certainly be the norm from December through April.

Considering that, the big Mercury Verado will be pushing the Haynie to and from all points throughout the Upper Laguna and Baffin. I will be hunting the largest groups of mullet on the most ideal structure I can find. Preferred structure this time of year is sand and grass mixes, travel corridors along the Intra-Coastal Waterway in the Upper Laguna, and shallow flats dropping off into deeper water in Baffin and adjoining satellite bays. That being said, my eyes are always wide open for anything that looks unusual in the water that I am traveling through. Hell, I'll fish in the marina if I think that there is a big trout in there.

The warm water temperatures that we have been experiencing have kept the best fish out in deeper water and on deeper structure. Expect them to be moving up shallower as the water temps rise. Without a doubt, this is where the biggest bites traditionally occur for us during this cooling trend. Obviously, they move up here to feed, and where my clients and I will be to intercept them. All shorelines in the Upper Laguna and Baffin that have close access to deeper summer haunts are going to get my first look on each morning. When I find the one such area with some surface activity (bait), we are dropping the Power-Pole and going after them.

As much as I hate to think about it, much less mention it, there is a manmade "unknown" that we have to contend with nowadays that can negate all your hard work and planning. What I’m talking about is the shallow water boater who insists on running shorelines. This “new wave of fishing reconnaissance" can just burn out miles of shoreline for guys wading or drifting shallow. The boaters that do this are either seriously uneducated or just completely inconsiderate of other anglers. Numerous groups have formed to discourage these actions and the "higher ups" are taking note.  There will come a time that if we do not police ourselves as sportsmen, big brother will step in and do it for us.

November will provide some great topwater action with water temps in the 60s to low 70s. I prefer the MirrOlure Top Dog on the days with moderate chop and the She Dog in rougher water conditions. The soft plastic category is a no brainer for me. The 5" Bass Assassin is in a class of its own when compared to similar lures. The softness of the lure gives it a much superior action over its stiffer copycats. As old man winter sets in, the Fat Boy by MirrOlure and the MirrOdine XL are perennial favorites. Keep it simple and don't overthink it.