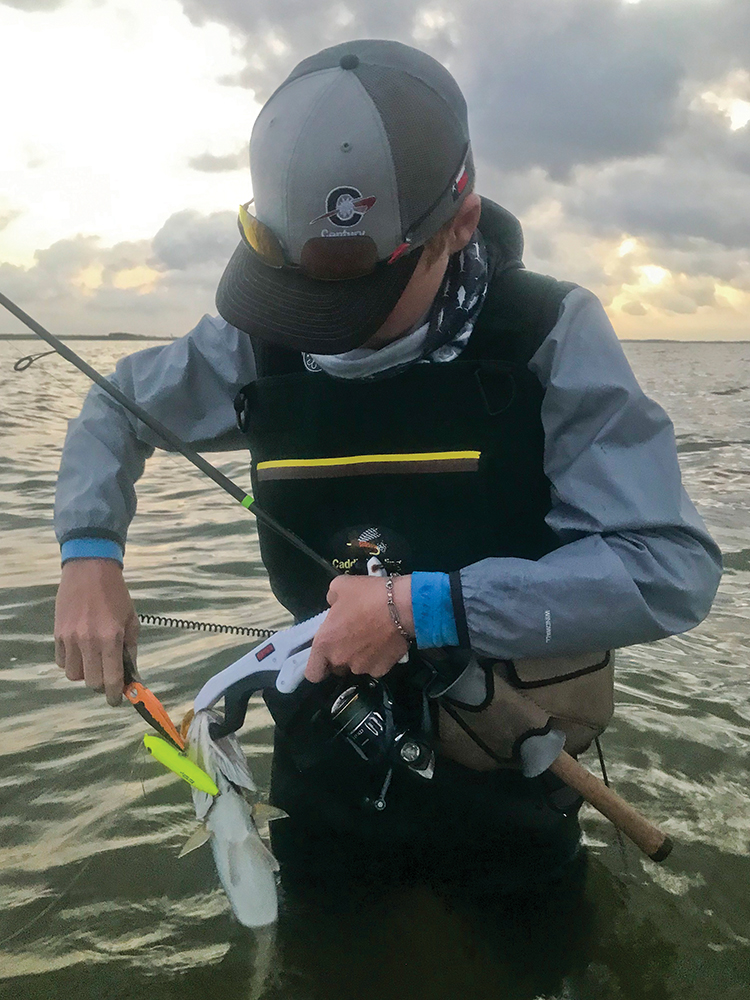 Recruitment...start them wading while they're young.

I hope this finds y'all enjoying some gorgeous mornings on the bay. These early fall temperatures in the Coastal Bend have been most refreshing to walk into each morning; albeit a bit frisky on that first wade. After being beat down all summer by the heat, early morning temperatures in the high 60s to low 70s has equivalent effect of a Vitamin B-12 IV drip on my system.

Having been fortunate to shoot some doves in September and a few archery deer hunts under my belt, my primary focus now is getting back to wading for big trout.  November is really the start of the trophy season. Last year we had some record cold fronts drop in on us and the trout acted predictably to the rapidly declining water temperatures.

Right out of the box, my clients and I  scored trout up to 9.5 pounds, with many more in the six- to eight-pound range. As I tell everyone who wants to book a trip during “the best month” for big trout…"It's not about the month, it's about sustained water temperatures."

Anytime you find the water temperatures dropping into the mid- to high-50s you will also find what I consider the beginning of big trout season. It just so happened that it started in November last year. Water temperatures will fluctuate back and forth between there and the mid-60s, and will definitely affect the trout movements and daily patterns. However, the big trout season will have begun and will continue through winter, spring, and on into May.

Observations of our trout fishery this summer gives me great hope of what our fall and early-winter fishing will look like. I had many days with clients that included some very solid trout during the hotter months, with trout ranging in the 6- to 7-pound range. Some measured well over thirty-inches, but had their summertime "skinny jeans" on, and were not especially heavy.

The fact that we were catching and releasing fish of this quality really has me excited about the days ahead. Honestly, it's been a while since I have seen that kind of quality.  I'm not sure what to attribute it to but I would certainly like to think that more folks are fishing conservatively and practicing more catch and release. This, mixed with the five fish limit, and an up-and-coming generation of anglers that find it “cool” to post photos and videos of fish being released on social media, may actually be bolstering the trend of more big trout in our bays.

Grassroots movements such as Release Over 20 and Speckled Truth (look them up on Facebook) are two great examples of  how many are starting to take conservation more seriously, and realize that speckled trout need to be released to insure an abundant fishery with a legit trophy class. When I started guiding in 2006, releasing all trout longer than 20-inches was at the fore of my mission and still is. This has never been an issue with clients, and I strongly encourage and challenge any guide that makes a living off this public resource to do the same. It makes a lot more sense to put more back than you take away from it.  Simple math!

Outside of,  “What is the best month to catch a big trout?" The million dollar question I get almost as often is, "What lures are they hitting on?" Over the years I have become a minimalist when it comes to packing lures around.  After thirty years and many thousands of dollars spent experimenting, my wade box will look like this for the next six months:

I keep two wade boxes outfitted with the lures mentioned; one for fishing clear to trout green water conditions (more natural colors),  and the other with the same lures in bright and dark colors for dirtier water. It's only a matter of getting into the area, determining the water quality, and then reaching for the appropriate box for the conditions. Works for me.