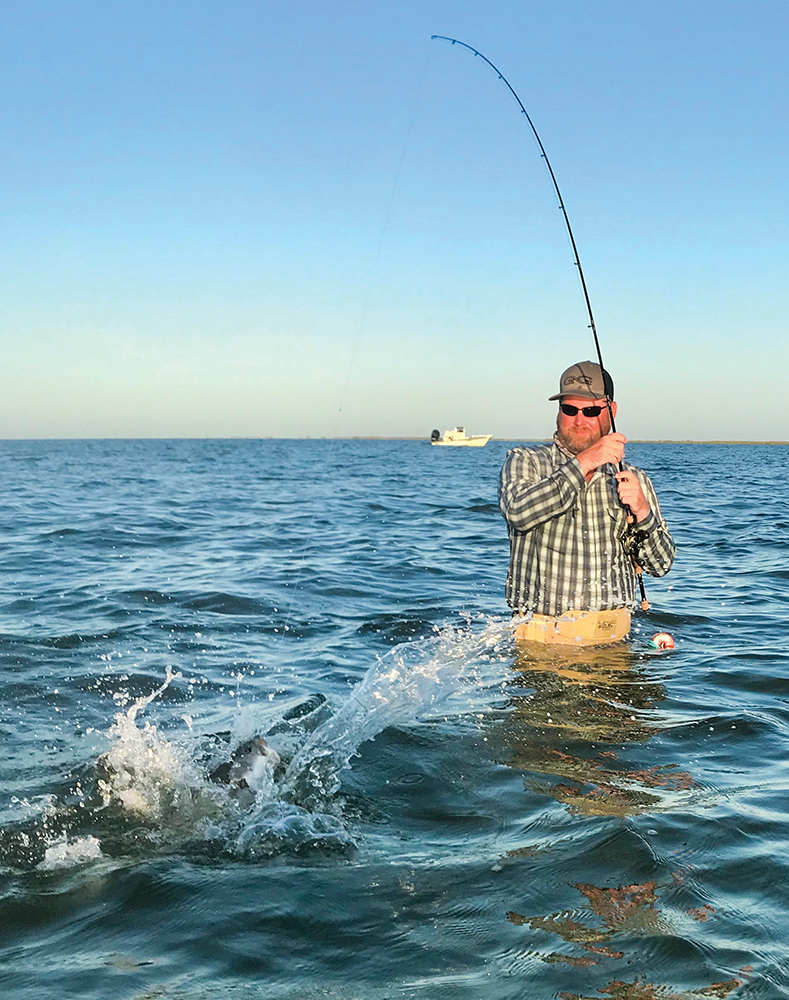 Joey Hollenbeak enjoying a big morning on the break of a shallow flat covered in schooling mullet.

Hard to believe we are just getting into the heart of the hurricane season, after riding out Hannah in late-July. She came early, and certainly made a memorable impact in Baffin and Port Mansfield. Owning a land cabin in the Yarbrough area, I was very concerned, as were many others, that the cabins would be a total loss. Cabins on the islands fared pretty well, considering. The floaters – not so much. From Baffin and far into the Land Cut the floaters took a beating. Total losses in many cases. Debris is scattered for miles and much of it is in traditional boating lanes. I would highly advise not running in the dark at this time.

September is a special month for me and many Texans. The bays have traditionally quieted down, thanks to schools reopening and fall sports cranking up. The smell of burning gunpowder floats around the state as hunters shift gears to dove and teal hunting. For a few lucky ones, we get to pull out a bow and squeeze in the first deer hunt of the year. September is also my personal favorite month to partake in beach fishing for big trout. I was so blessed to get to ride up and down the Padre Island National Seashore many days with the legendary Capt. Billy Sandifer during this month in years past.  We made many great memories in the calm September surf sight-casting big trout. The education he gave me out there will always be priceless to me. Good times in Texas!

Tides increased dramatically in the wake of Hurricane Hannah and made for some tough fishing days. As of this writing the tides are slowly falling and water conditions are beginning to trend closer to normal. Short of another major tropical weather system coming through, September has always been a solid month in Baffin for better than average trout. Of course, every year is different, but I like to be the optimist and reflect back on the best memories from Septembers past. Like the one when Kirk and Kelly Childress were here and we started off an epic early morning wade with many trout over 25-inches, only to be topped off by Kirk hooking up with a 4-foot tarpon. He lost the fish but the jump and memory will always be there.

Throughout the Upper Laguna and Baffin, hoards of baitfish will be starting to gather up for a push to the gulf in October.  Rest assured that gamefish will be very near to them.  These big pods of mullet I'm looking for are in shallow water that has a deep drop-off adjacent to it. If things work out right, the trout will be right in there with them, but most likely, they will be on the edge of the flat and deep water…. just waiting for a mullet to venture out a little too far from its safety of the larger school.  This scenario will play out all over the bay and will make for some quality fishing throughout September. In fact, I have already been exploiting this pattern since early August.

DQC International Corp., manufacturer of the 13 Fishing/Concept reels, has brought on fishing tackle legend  Rapala VMC as a minority 49% investor, to reach the global market outside the USA. New models of 13 reels have recently hit the market and I'm very impressed with what I am finding in the salty conditions of Baffin Bay.  The new reel models are the Concept A2, Concept C2, Concept TX2, and Concept Z-Slide.  Both the A and C reels are ball bearing reels, while the TX2 and Z reels use the CZB polymer bearings. Although I have been testing each with great results, the Concept C2 is the one I seem to be using the most. Each of the reels has unique specs, but  these are some of the standouts on the C2:
*Hi-Tech Cast Iron Carbon Frame and Side Plate
*High Spin Spool System
*Extra Strong Titanium Coated Aluminum Hamai Cut Drive Gear
*9 Ball Bearings
*Reinforced Clutch Cam
*Generation II Hard Anodized Worm Shaft

There are so many reels on the market now that it becomes confusing with all the hype and reviews. This generation of 13 Fishing’s Concept reels is very legit and something I'm proud to cast every day on the water.