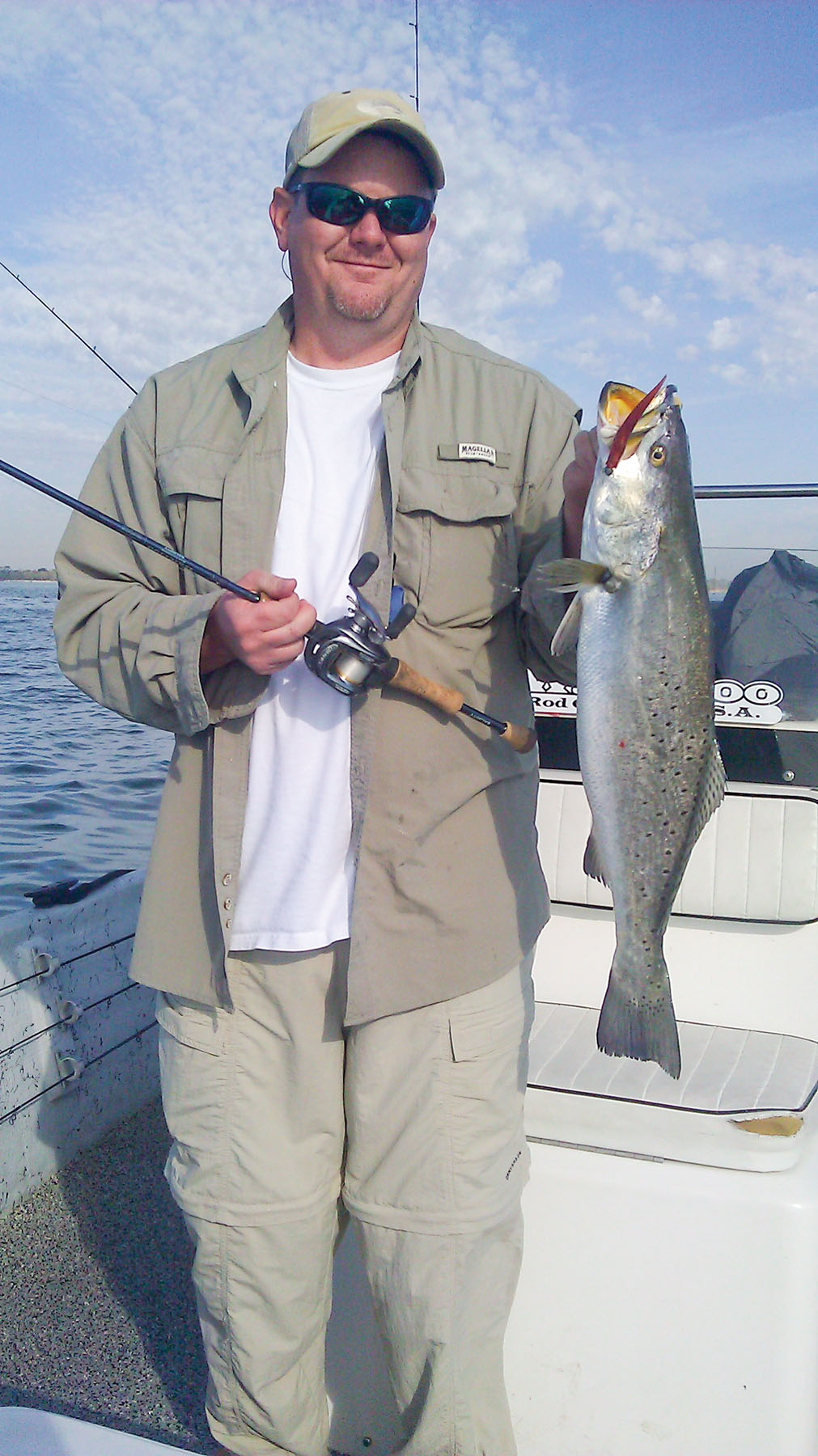 Slow sinkers and soft plastics have been our go-to baits; smaller topwaters are working in the clear shallows during warm-ups.

Anglers are finding good fishing across the entire Galveston Bay Complex from north to south and east to west. From shallow flats, backwater lakes, bayous, rivers, and deep open-water structure, there seems to be fish all over the place. Whatever your lure preference or natural bait; fishing reports indicate its all working for lots of anglers. The combination of a mild winter so far and above average salinity rates are creating good water clarity everywhere. Water temperatures have been hovering around the magical low-60 mark which concentrates the baitfish making it easy to target trout and redfish.

An easy pattern for me lately on larger specks has been locating rafts of mullet along northern and eastern shorelines just after a norther as tides return to normal and a steady two to three days of northeast winds. It really makes a difference to have a mud and shell mixed bottom in two to four feet of water near bayous, drains, towheads, or dropoffs. This has been a pattern I established about two weeks ago and the key is to stay with it until the weather drastically changes. As mild as it has been this pattern could last a long time for us.

Topwaters have been paying off early at first light but keep them small in clear and calm conditions. The MirrOlure Top Dog Jr in mullet colored patterns and the Spook Jr are working really well when it's calm or a light chop and the larger topwaters will work as conditions rough up. As the sun gets higher a great choice for me has been the Maniac Mullet by Tidal Surge in a pearl bodied chartreuse back and the hot pink in the slow sink for shallow applications and the fast sink for deeper structure as the fish start to roll off the flats by midmorning. Don't discount soft plastics; I've caught some really nice specks on the MirrOlure Lil John and Tidal Surges Split Tail Mullet rigged on an 1/8 ounce jighead or an 1/8 ounce flutter jig. The 52M MirrOlure in chartreuse, white, orange, and pink have caught some big specks here lately drifting deeper flats and structure in five to six feet of water in pretty adverse conditions. No matter where you like to fish Galveston in the winter the key to producing day in and day out is to stay with the baitfish whether it's shallow or deep; the fish are going to be there or pretty darn close by.

In East Galveston Bay, the south shoreline before a front and the north shore afterwards are producing some nice fish for waders. All the drains and primary points are paying off on an outgoing tide, all down the south side of the bay. During warm-ups the deeper guts and bayous are holding good numbers of school-sized fish over shell with soft plastics.

At Moses Lake and Dickinson Bayou, the bird action has been fair after fronts for specks and reds and drift fisherman have been doing fairing well with live shrimp and soft plastics. Dickinson Bayou has been very good on warm-ups along shallow banks for specks, reds, and flounder.

Clear Lake has been holding some nice fish under birds and in the channel on points of rocks and dropoffs along turns and bends west of the Kemah Bridge.

Down in West Bay some nice trout are being caught over shell when water temps dip toward 60 after a front. Good areas have been North and South Deer Island, the Old Intra-Coastal and Carancahua Reef.

Some decent bird action has been occurring behind San Luis Pass, Drum Bay and Bastrop Bayou. The grass flats along the north side of West Bay has been good for trout and reds on topwaters and soft plastics over potholes in post-front conditions. Redfish have been good in Greens Lake in the very back for sight-casters working shallows on higher tides.