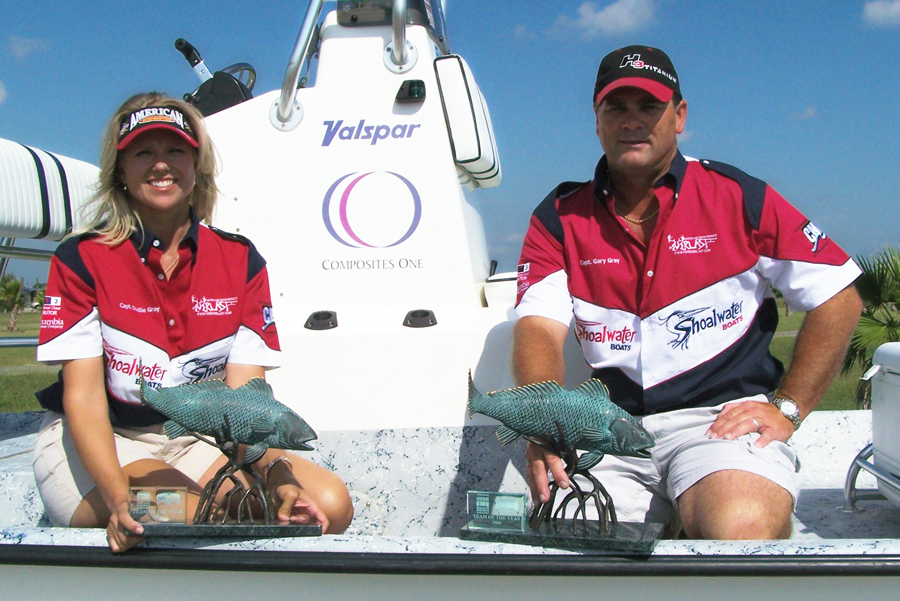 Gary and I are proud to show off our Texas Redfish Series Team of the Year trophies.
It truly is amazing how time flies by, it seems like just yesterday we were in our summertime mode and now here we are in full swing of the fall season. It has been a very busy year for Gary and me, keeping extremely busy with guiding and competing in fishing tournaments.

In my last article I wrote about how Gary and I began our journey into the redfish tournaments and how we have competed as a team together for the last three years. Tournament style fishing has taught me many things, some lessons were good and some were well, some of the endeavors I could have lived without. There has definitely been a lot of firsts for me while fishing in tournaments and in September there were a few more.

Pat Drake and Patti Polensky formed a great association a few years ago called Texas Lady Anglers, I am sure you have heard of it. Well after a year's worth of planning they joined up with Redfish Nation to produce the first-ever all ladies professional redfish tournament. The groundbreaking tournament was held in Rockport this past September and while the attendance level was not as high as some had hoped it was definitely a great start of things to come.

I was delighted to be teamed up with Judy Wong through American Rodsmiths. If you haven't already heard, Judy and I now have our own Signature Series rods made by American Rodsmiths customized just for lady anglers. The Lady Rodsmiths Titanium Tournament Series rods, made in freshwater and saltwater models, are not only very eye appealing due to their pinkish color but are also extremely lightweight and can handle anything you can give them, from the biggest bass to the toughest redfish. I am so proud to be affiliated with American Rodsmiths, finally a rod maker that not only recognizes lady anglers but also supports and encourages us in a field that is dominated by mostly men.

The ladies professional redfish tournament was a one-day tournament held on a Saturday. I believe we all had the jitters that morning and probably some more than others. After talking to some of the ladies the night before I found out some of them had just learned to drive a boat a month before the tournament. It really isn't uncommon for an experienced lady angler not to have boat-driving experience. I think about all the ladies I know that are very experienced anglers but would rather have their significant other worry about getting from point A to B. You see guys, believe it or not, we ladies can do just about anything we CHOOSE to do. It is just a matter of "If we want to!"

We started off at safe light and had to be back for weigh-in between 2 and 4 pm. While prefishing for the tournament I found some nice reds on a shoreline not far from the tournament site. When we arrived to the same shoreline the morning of the tournament I noticed the tide was much higher than two days before. We saw and cast to many reds but couldn't tempt them to bite. About midday we decided to cross the open water of Aransas Bay and head for St. Charles Bay to an area I was certain we would catch two keepers but knew they would be lower slot size reds.

The hard wind that day made for a very rough and long ride to our destination. Judy and I fished hard catching many redfish but unfortunately none measured over 24 inches. It was really great getting to chat it up with a lady angler of her skill level. She too is a guide on the freshwater side and a very accomplished bass tournament angler with many wins under her belt.

When we got back to weigh-in I was delighted to hear that the majority of the teams had two fish to weigh. As much as I would have loved for Judy and I to be the champions of the first ever all ladies professional redfish tournament that honor would go to Dawn Pakebush and Tammy Barr. I have the privilege of knowing these ladies first hand and boy they can sure fish. Congratulations to you both!

While there can be only one winning team in any tournament I feel like every one of the ladies that participated in this one were all winners. Many of the teams accomplished feats that just months ago they thought were impossible. Pat yourself on the back ladies. job well done!

I also have to give a round of applause for all those that volunteered to help with the tournament. There is a ton of activities that go on behind the scenes and without your generous donation of time and energy this tournament would not have happened without you!

For any of you lady anglers out there that didn't know about the tournament or maybe some of you are kicking yourselves in the rear for not participating in this year's tournament, keep your eye on www.texasladyanglers.com for next year's dates. From what I heard there will be two venues on the calendar and I believe the locations may be Rockport and Port O'Connor.

Before I close out this article I have to do a little patting on my back. Gary and I fished the final leg of the Texas Redfish Series in September and took home The Team of the Year award. We were both so proud of what we had accomplished and it took everything I had not to shed a tear on stage as we accepted our trophies.To my husband, Gary, It truly is amazing that as my teammate you are not only my husband and best friend but also one of the best fishermen I have ever met. Even though we have had many "heated" discussions during tournaments you must know your knowledge and skill is where my confidence resides. Hey, how many teammates get the bonus of kissing their partners and liking it!