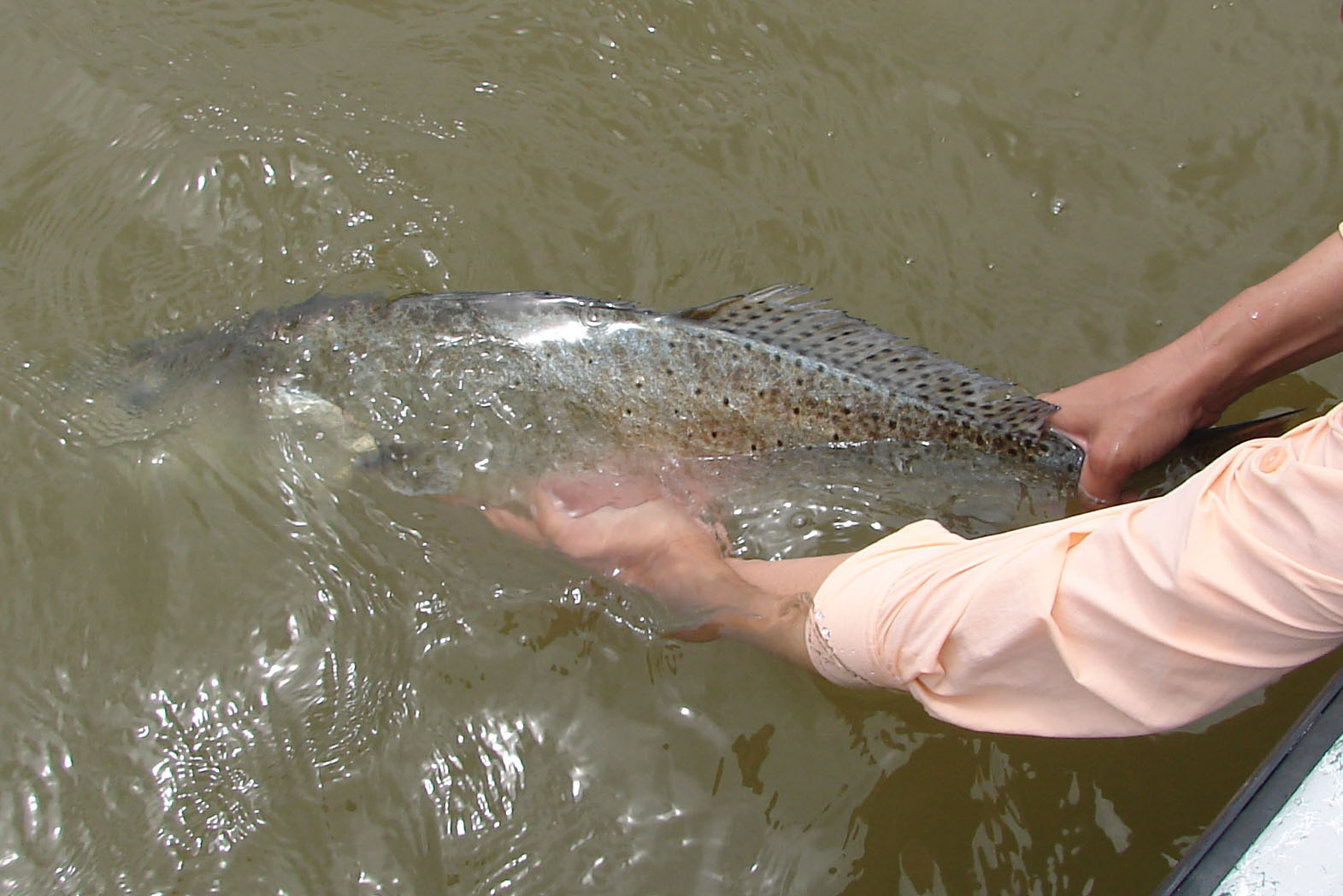 Releasing the big girl to fight another day.

Our busy season is now in full swing and we have had many memorable trips so far this year. We have had the pleasure of helping some bass fishermen catch their first saltwater redfish and the excitement of watching others land their personal best of other species.

Since Gary and I guide together as a team, we get quite a few trips where customers like to put on what we call a mini-tournament. We have done this many times in the past with lots of people but until recently we had never been asked to fish a mini- tournament pitting an all-girls team against an all-guys team.

Chris Tucker, owner of Inland Inspections, has been fishing with me for several years now. We met when another of my customers booked a trip and brought Chris along. Ever since that first trip Chris has made it a point to schedule two days of fishing in May right around his birthday.

This past May Chris once again scheduled his annual trip only he wanted to add a little twist. He decided to make it more exciting by bringing along some buddies and their better halves. The guys would team up with Gary and the girls with me. I forewarned Chris that it would be tough to beat Lady Luck and Girl Power but he insisted that the guys would prevail.

On the first day of the two day tournament Mother Nature had other plans that kept us off the water until later in the day. When the weather finally cleared about midday we met at Charlie's Bait Camp where we were presented with our tournament shirts. This was a nice surprise to say the least. The guys wittingly named themselves "Team Power Poles" while we girls were given the name "Team Red Hot Happy Hookers." After some laughs we also noticed we were all given different names for each day of the tournament. On the first day Gary was given the name "Captain Tail Dragger" and mine was "Captain Red Hot." It was even funnier after we discovered it wasn't the girls who had gone the extra mile by getting the shirts made, but instead it was the guys who were so imaginative. Go figure!

All adorned in our new tournament shirts we left the docks talking trash. On the first day of the tournament it was decided in advance that we would only keep two to three fillets per person, just enough to get grilled up at Josie's Mexican Restaurant later that night.

With the skies still threatening we decided to fish close to the docks. Fishing was somewhat slow but we still had some exciting moments to keep us entertained. Jennifer Anderson, one of my teammates who is also expecting her first child, hooked up with a nice 26-inch redfish. It was really funny watching her reel in the big fish because she giggled the whole time and even admitted she didn't know why she was laughing but she couldn't stop. This was the first time she had ever caught a redfish and even though she has been offshore many times she agreed that the fight of a redfish is hard to beat.

After catching some keepers and many undersized fish we decided to call it a day. We met up with the guys back at the docks and soon discovered that while they had us beat with numbers, we brought back the biggest.

The weather was more in our favor on day two. This day I was "Captain Pony Tail" and Gary was "Captain Topwater." While the guys were still talking their trash from the day before we let them in on a little secret of ours. After talking with the girls the day before I found out that we were all extreme dog lovers and they encouraged me to bring along one of my favorite fishing buddies, Maggie, my yellow lab. With this added boost of "good karma" we girls knew winning would be in the bag!

The fishing didn't start out too good for us. At our first stop Jennifer once again hooked up with another big fish but before I could get to her to tighten down the drag she was completely spooled. It was a great way to start the day and we had good conversation for a while pondering what could have been on the other end of that line. After that things slowed down for us and we soon found ourselves fishing close to where the guys were.

After speaking with Gary over the phone we found out the guys were once again beating us by numbers. Since this second day was catch and release we girls were naturally skeptical of their winning status–that was until we pulled along side of them and watched them catch one after another.

Feeling somewhat disgusted and a little like sore losers we shouted out a few come backs and encouraged Maggie to do so as well. As she tossed her head back and barked quite a few distasteful "woofs" we girls bent over with laughter. We then pulled up next to the boat to steal the guy's Oreos and told Maggie to feel free to board their boat and steal their "Mojo." After walking around Gary's boat a few times and touching each man on board she then leaped back on our boat and we continued on to the last spot of the day.

The last location proved to be the pot of gold at the end of the rainbow. After landing a few nice reds Ellen Scheffers, Chris' girlfriend, had hooked up with what we all thought was another big red but ooh were we so wrong. As Ellen was busy trying to keep the big fish away from the motor I got a glimpse of the big girl and thought "Boy that sure looks like a big trout." Low and behold it was!

It was a wonderful battle between the big girl and lady angler, but Ellen managed to keep her cool and after one last run managed to get her to the boat. Getting the big girl into the net was a whole different ball game. Because of her large size it took several attempts but finally with me halfway in the water and Ellen guiding her trophy into the net we were able to bring her on board.

The excitement on board grew after Ellen announced she was entered in the Star Tournament which started the day before. The big trout measured in at 27 inches long but unfortunately fell short of the 8 pound minimum requirement to be eligible for the tournament.

We placed the big girl in the live well and made a phone call to the guys. After sharing our exciting news Chris made the conservative call to release the big girl. He assured Ellen he would have a fiberglass mount made of her trophy. So after some very quick pictures we released the beautiful big trout back to the water from where she was taken. It was a great ending to a perfect weekend.

And Mr. Tucker if you are reading this article don't forget, it's hard to beat Lady Luck and Girl Power especially when they are teamed up with one lucky dog named Maggie!