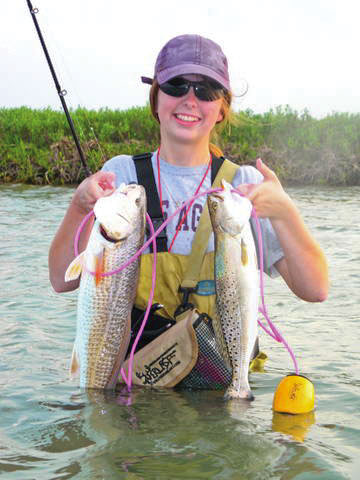 Summertime fishing patterns are in full swing. While we did have our fair share of wind in April and May, June has brought us better conditions and these should continue through July. Venturing into the open waters of West Matagorda, Espiritu Santo and San Antonio will hopefully be a daily occurrence. With so much potentially good water to fish, it can be hard to choose which bay system to concentrate your efforts in.
With summertime heat it is really hard to beat wade fishing for comfort so I am going to talk mostly wading strategies here. I will not go into a long speech about gear but I will say that wading without stingray protection is just plain stupid. ForEverlast Fishing and Hunting makes two different set ups that can be used; one being a boot with guards attached or a two part system that offers removable guards worn with their shorter reef boot. I know some people complain about the expense of these boots but you have to ask yourself, "Can you really afford to be without them?"
West Matagorda Bay has so much potential this time of year it is hard to fish elsewhere. Miles and miles of sandy shorelines with plenty of grass and guts offer baitfish the perfect hideouts. Fishing the Gulf surf can also be hard to beat. So whether you decide to start in the surf, on a shoreline, or maybe the spoils on the east side of the Matagorda Ship Channel, it is important to note that the best numbers of trout will be caught out a little deeper than they were earlier in the year. Wading chest deep is not everybody's favorite but it is where I usually end up with my customers.
Surf fishing has really turned on but be forewarned it is not uncommon to have to travel more than 15 miles east or west of Pass Cavallo to find a good bite. Keying in on feeding birds, jumping bait and/or pelicans diving or sitting on the beach is a necessity to finding feeding fish in the surf. Speckled trout can usually be found between the first and second bars with redfish hanging in the first gut. Soft plastics and topwaters are both effective baits to use while fishing in the surf but make sure to use a leader of at least 20lb test due to the many aggressive and toothy critters you might encounter.
Tide movement can be important. With two openings to the Gulf, the trout in West Matagorda Bay can become strongly tide oriented in their feeding. New anglers often do not understand that current carries the bait to the predators and the ebb and flow of the tide creates the current that can make all the difference. Even when all other conditions seem perfect, gamefish that reside near a pass simply will not feed without current. On days with weak flows and also during slack periods between tides I will move to areas like lower Espiritu Santo and San Antonio Bay where the fish are not as tide oriented. A careful look at the tide chart can help you plan for a successful trip.
Lately my most effective lure has been Bass Assassin's 4 inch Sea Shad in pumpkinseed/chartreuse and also their 5 inch Die Dapper in the Houdini color. Some days it's hard to beat the Die Dapper. It is a larger bait but is more buoyant than you would think and the tail action is intoxicating to most fish. However, there have been days when I would get what I call "short strikes" and this is when a trout would hit for a split second then spit it out just as quickly. Its times like this when the 4 inch Sea Shad comes into its own. I have also noticed that with warmer water temperatures we are finding more strikes in the lower part of the water column. Some days we do better just barely bumping bottom and I look for that pattern to continue through the summer months.
Being patient and fishing thoroughly through your wade area from waist to near shoulder deep is often required to find the bite during this hotter time of year. We have enjoyed more rain year than we did in 2009 and 2011 and I believe it has lowered the salinity on average and improved our fishing, but having said that, I would not be upset if God blessed us with more.