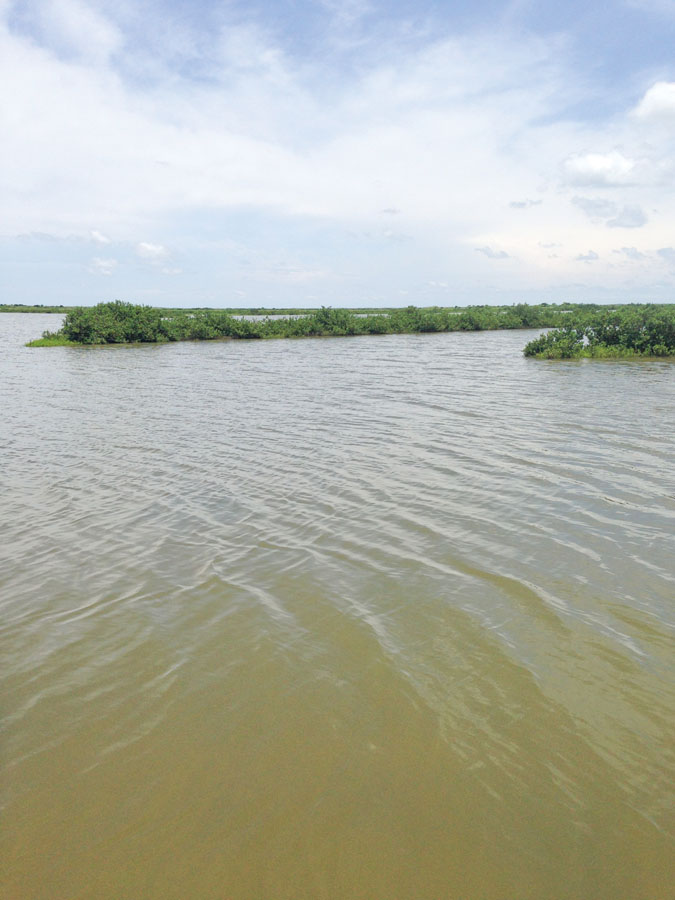 Points such as these should receive thorough investigation, whether wading or drifting, in summertime.
The abundance of fresh water flowing into our bays has definitely kept us on our toes. Finding a consistent bite has been somewhat difficult but I look (hope) for things to return to nearer-normal conditions in the next few weeks.

In this month's article I will be talking bay fishing, even though in year's past I have said that July and August are the prime months for surf fishing. My reasoning is that there will be many days when the weather (mostly wind) will not be favorable to venturing out into the surf.

It was on a recent trip that it occurred to me how patience is the greatest key to fishing success during the hottest months. I took my customers to the first spot of the day, an area that I knew had been holding good fish for at least a week but, due to recent high wind had not been favorable area till this particular morning. The scenario could not have been more perfect.

We were on a sandy outside shoreline of San Antonio Bay with many guts and pockets of grass. Bait was abundant and water clarity was what I prefer, not too clear, just a hint off-color. Considering recent fresh water problems, finding this area with decent water color was a bonus. Before even getting out of the boat we witnessed several schools of bait fleeing for their life. Something big and hungry was under them. Needless to say this increased our excitement.

With all the jumping bait I opted for a clear Super Spook Jr on my 6'7" Waterloo HP Lite. It is my opinion that while topwaters do not always produce as many hook-ups as plastics, they are exceptional fish finders. Many, many times when surface plugs brought numerous blow-ups, a quick switch to soft plastic sealed the deal.

I suggested my customers start with 4-inch "Mama's Chicken" Bass Assassin Sea Shad on 1/8 oz heads. And so we began our wade parallel to the shoreline. I had one customer who really favors redfish so I placed him up tight to the grass while the rest of us took positions further offshore. We covered a lot of water and managed to string some keepers but it was no way as productive as we'd hoped when we arrived at sunrise.

It was late morning when we climbed back into the boat. After satisfying our thirst and hunger, they were eager to ask, "What's next, Captain?"

To their surprise I told them we were going to hit the same area again. You see, it was a hot day, Saturday, and I'd already noticed at least ten boats running by while we were wading, searching for their next "best" spot. While we may not have enjoyed steady action the first couple of hours, each of us had managed to land at least a couple decent fish. Most importantly, we knew our area was holding fish; even if they'd been a bit reluctant to bite. And, we knew they hadn't been disturbed by boat traffic. Two things you're never sure of when "you leave fish to find fish."

Before climbing back out of the boat for the rerun, I decide it was best to change everyone's lures to Bass Assassin scented 3-1/2 inch Die Dappers in the "Houdini" color, rigged weedless. My thinking was that it was now a good deal warmer than when we started. I wanted my anglers to be able to slow their presentations without hanging up in the grass. The fact that the Die Dapper is impregnated with B.A.N.G. attractant had me hoping the scent might entice the finicky fish we'd found earlier to strike more aggressively.

Over the next couple of hours we doubled what we got earlier in the morning. I had some very happy customers when it was all said and done. They sheepishly told me at first they were somewhat skeptical about fishing the same area over again, but so glad we did. They also said that it was one of the best lessons anyone could have taught them. They, like many other anglers, have grown accustomed to fishing through an area quickly and then blasting out to the next potential location. They also admitted that because of that mentality they had often wasted more time boat riding than they actually spent fishingand usually would come up empty handed.

So just remember, when it's hot and the water is crowded most of the time, patience and staying put in an area that looks favorable (and known to be holding a few fish) can make the difference between having fish for dinner or another cheeseburger.